KATHMANDU, Aug 18: Shalikram Pudasaini, a journalist from Chitwan was found hanging from the ceiling of a hotel in Chitwan earlier this month.

The case has now become a subject of huge controversy following the arrest of television presenter Rabi Lamichhane and two others, based on a leaked video purportedly taken by Pudasaini himself on his cell phone before his suicide.

Lamichhane and two others are under arrest and Chitwan District Police in investigating the case.

A lot of unsubstantiated news and video stories are viral on social media.

The Chitwan District Court on Friday ordered Chitwan police to keep Lamichhane and two others into custody for five more days in order to carry out the needed investigation.

People are sharply divided over the arrest of Lamichhane, Yubaraj Kandel and Asmita Karki. Facebook, Twitter, and other social media outlets have hundreds of videos and stories which are fuelling the conspiracy theories about the “suicide case.”

Two youth groups held separate demonstrations in Chitwan to support and protest over the arrest of Lamichhane and two others yesterday.

Folks on social media are accusing Lamichhane and two others of orchestrating Pudasaini's murder, and argue that the leaked video itself is enough evidence to prosecute him over the incident.

However, some say the video cannot be used as a piece of solid evidence to punish Lamichhane, Kandel, and Karki. At the same time, some say it would not be wise to jump into conclusion right now claiming that the leaked video could have been edited. 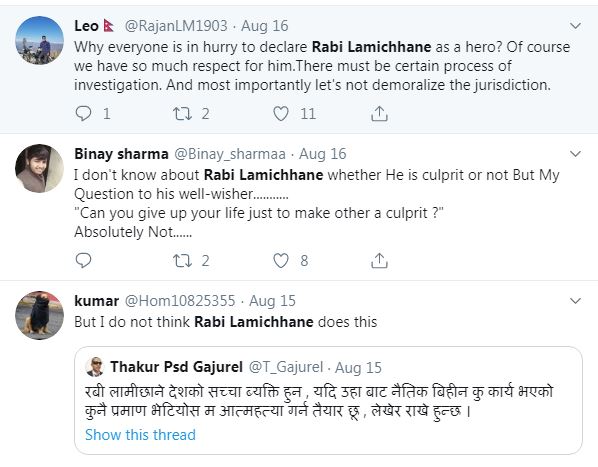 People are also divided over what Pudasaini said on the video, entirely accusing Lamichhane, Kandel, and Karki of compelling him to commit suicide. Pudasaini's statement in the leaked video has yet to be substantiated.

Pudasaini was working with Mountain Television until his death. In a recorded video that was posted on social media after Pudasaini's 'suicide', the deceased has held three persons — Lamichhane, Kadel, and Karki -- responsible "for his decision to kill himself".

On Thursday, a team of police deployed by Chitwan district police office arrested Lamichhane and his colleague Kadel from Kathmandu-based News 24 television office. Lamichhane was arrested after a tip-off that Lamichhane already produced a report about "Pudasaini's suicide" for his television show Sidhakura Janata Sanga and was planning to air it on August 15.

Initially, the police requested Lamichhane to postpone the broadcast of his program Thursday. But Lamichhane refused and police arrested him. 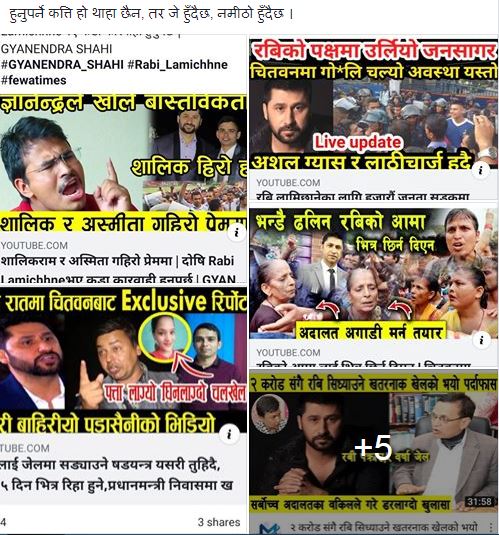 CHITWAN, Aug 20: As the fans of TV journalist Rabi Lamichhane, who is in police custody in connection with the controversial... Read More...

KATHAMNDU, Jan 6: Utilizing resources to optimum capacity is the rule of thumb  while fixing the installed capacity of any hydropower... Read More...