So near, yet so far: Story of a village untouched by development 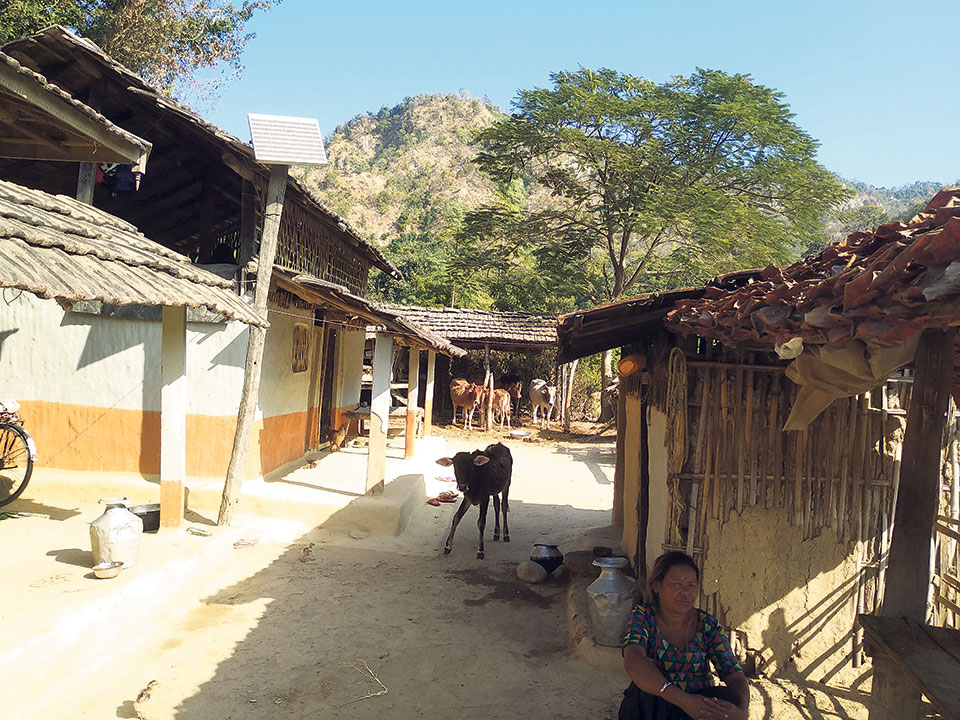 A view of the Deurali village of Mirchaiya Municipality in Siraha in this recent picture. Despite being 15 kilometers away from the East-West Highway, the village does not have access to basic necessities like drinking water, electricity, health facility, school, among others. Photo: Republica

SIRAHA, Dec 20: It has been decades since Mana Maya Magar, 73, of Deurali village of Mirchaiya municipality – 9, has been fetching water from Ghurmi River. Even though the river’s water is not clean, her family doesn’t have any alternative for drinking water. She suffers from poor health, yet, there is no choice than to perform household chores. “I cannot work that as hard as I used to but still I do all that I can do,” she states.

Earlier, she used to visit VDC for old-age allowance. Now, the VDC is called a ward office and the area has been termed as a municipality. And Mana Maya does not know why.  “Now there are no VDCs anymore, they say. There is a municipality office now but I go to the ward office for collecting my old-age allowance. Nothing has changed, but the names of the offices, I don’t know why.”

She had to go to a distant health post for check earlier. And this has not changed even now. “Just like we are drinking water from the same river and fetching goods from the same market, we still visit the health post that is very far from here,” Mana Maya reported.

Unlike in the past, nowadays she has to frequent health posts many times more. “It would be so easier for us if the hospital and the doctors were nearby. But what to do, we don’t have such facilities. I sometimes get even sick due to the need to travel the long distance to the health post,” she stated.

Both for health reasons and shopping the locals continue to go to Golbazar. Neither treatment and medicines are free, nor essential commodities come at affordable prices, she says. Mana Maya says her life always reeled under extreme poverty and she will die poorly.

“During the election times, we were told that Singhadurbar is coming to our doorstep and that we will have access to all facilities. But now I realize that they were faking,” she laments.

“Nothing has changed here. We are yet to see any development done around here. Politicians only made tall promises like they always did and have left all of us to our miseries.”

Bel Kumari Rai, 50, is a mother of six. The mother of four daughters and two sons recounts the horrible tale of how she is raising those kids amid the lack of facilities and resources. “I was told that a pregnant woman needs to have iron tablets. But when I tried to get those, I had to go through difficult times. And the scenario has not changed for us,” she stated.

The lack of health post nearby has cost it dearly to all the villagers. Golbazar is far away. Other destinations like Chorhawa, Mirchaiya and Lahar are even farther.

“When we get sick, we try to suppress it rather than seeking the consultation of a doctor. The need to go to the doctor makes us sicker actually because we have to spend considerable time and money. Moreover, it is not easy to get ready to step out when you are not feeling well,” Rai elaborated.

Abhishek Sunuwar of the village is already 14. However, he does not go to school. He spends the entire day collecting fodders and leaves. “We are very poor. By collecting tree leaves I make leaf plates which are used in feasts. That is how I earn a little for my family,” Sunuwar said. “If I go to school, I will have to manage expenses instead of earning something.”

Sunuwar sells leaf plates at Golbazar where special market opens on Saturday and Tuesday. And on Sunday and Thursday, his items are in demand at the Choharwa market.

“So, four days a week, I sell leaf plates. The rest of the days, I prepare them,” Sunuwar said.

Another reason why he did not think of going to school is also that school is not nearby. Had there been one, ‘maybe I would have considered going for it’.

“Children from our village hardly go to school. There is no school close to our community. So, we have to go far away if we want to study.”

The nearest school from the village is at two hours of walk. Two way, it takes four hours for the trip. And this discourages parents too, to send their children to school.

The village is around 15 kilometers away from the East-West Highway. However, despite falling within the boundary of a municipality, it is still untouched by development. There are no power, transportation and communication facilities. And does not have accesses to schools, hospitals, markets. It is home to 50 Rai, Magar, Sunuwar, Majhi and Tamang families.

KANCHANPUR, Feb 11: Deputy Prime Minister and Minister for Energy Kamal Thapa has said that 40 per cent people in the... Read More...

41 injured in bus accident in Dhading
8 hours ago
Rs 10,000 fine slapped on Rajpur's mayor for not providing information
1 minute ago

100 sacs of fertilizer meant for Rolpa ‘vanish’ in Dang!
46 minutes ago