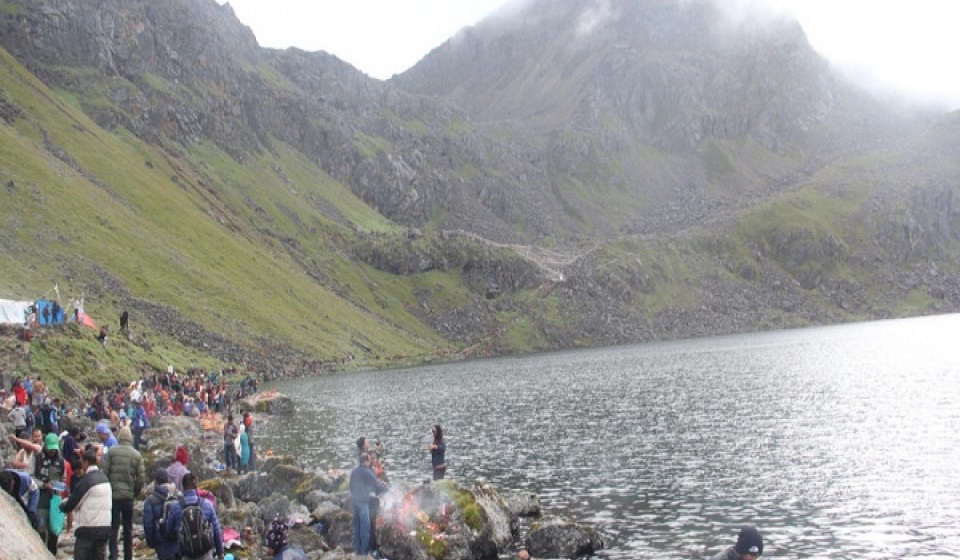 RASUWA, Feb 8: Devotees going to the holy lake Gosaikunda by air have been affected due to a snowstorm. Helicopter companies have stated that the scheduled flights had to be postponed several times due to the heavy snowfall.

Although Gosaikunda is just about 26 minutes away from the airport, flights have been operated according to the nature of the weather as there is snowstorm and fog during the time of flight. Helicopter companies including Simrik, Helialtitude, Kailash, Dynasty Heli and Mountain had to postpone their flights scheduled for Sunday due to the snowstorm.

Similarly, due to the snowfall two days ago, Gosaikunda Lake has been completely frozen. According to the locals, the hillside is completely covered with snow and three to five feet of snow has frozen on the surface of the upper part. Hotelier Kamisitar Tamang said that four hotels in Gosaikunda had to be closed due to heavy snowfall.

Priest Tanka Prasad Dhakal said that the local devotees, who are not able to visit the holy lake on foot, have been doing so through the helicopter service provided by the various companies. However, due to heavy snowfall, devotees visiting Gosaikunda on foot have been stopped.

Likewise, according to local Resham Tamang, after the snow has melted up to 14,000 feet above sea level, it will be easier for trekkers to reach the holy lake. Farmers have also said that it has been easier for cattle to graze after the snow melted in the lower region.

TAPLEJUNG, Oct 18: Pathivara Temple, one of the famous Hindu shrines in eastern Nepal, has been closed for visitors. ... Read More...

RASUWA, Aug 27: The influx of visitors in tourist destinations of Rasuwa district has increased of late. The number of... Read More...