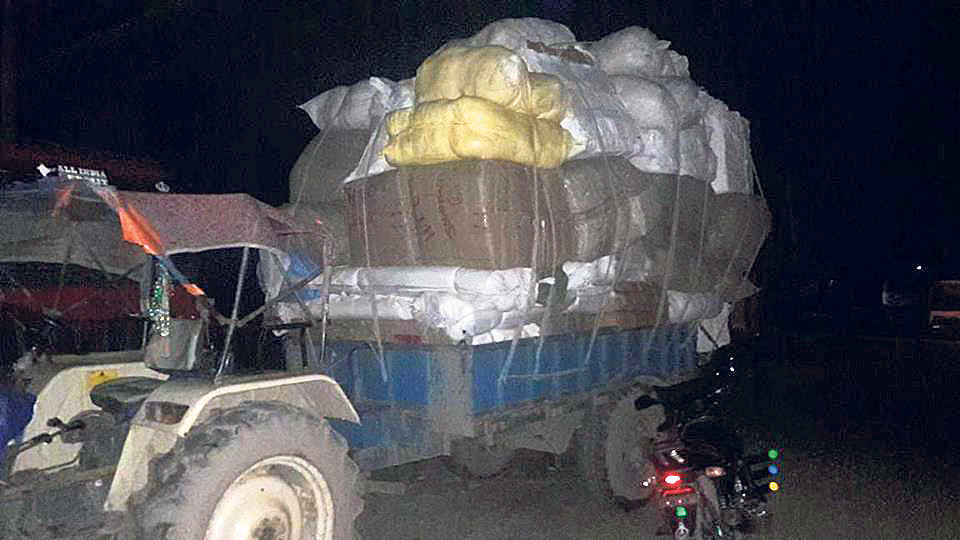 Goods taken under control by Morang police on Mondady night.

BIRATNAGAR, Sept 5: With major festivals drawing nearer, smuggling of goods through the eastern customs point of Biratnagar is on the rise.

District Police Office, Morang, on Monday night took two cargo vehicles under control after police personnel found that the vehicles were carrying more goods than mentioned in the customs declaration form. The police have also found evidence of under-invoicing.

The customs office had released both the vehicles after completing necessary formalities.
Trade though the customs point was halted for nearly three weeks after recent floods damaged Bihar's Mirganj Bridge and railway track to the neighboring Indian market of Jogbani. As a result, traders are re-routing imports through Bhimnagar-Bhantabari transit point. Traders are taking advantage of lack of infrastructure and human resources in the new transit point.

To ensure that there is no irregularity in the customs clearance process, police have made an arrangement of bringing all vehicles to the yard of Biratnagar Customs Office. Vehicles are released only after strict checking at the customs office.

“Customs officials seem to have completed the evaluation process. But we found that the vehicles were carrying more goods than what have been specified in the customs declaration form,” Santosh Niraula, chief of Area Police Office, Rani.

The police had seized the vehicles with registration number Ko1Kha 4010 and BR 38E4640 (Indian registration) from Ram Janaki temple in Biratnagar-15 on a tip-off. According to the police, the trucks are carrying cosmetic products, shoes and sewing equipment worth Rs 6 million. The police sent the vehicles along with the drivers - Sashi Chaudhary of Gramthan Rural Municipality and Sunil Sharma from Jogbani, India -- to Revenue Investigation Office, Itahari, for further investigation on Tuesday.

Dilip KC, spokesperson for the Biratnagar Custom Office, however, said that he does not have information about the matter as he was on leave.

The same case had happened during last year's Indian blockade too. Last year, police had found that customs officials were releasing vehicles without completing evaluation process. Two officials of the customs office were punished for their involvement in the irregularity.

Morang Police also impounded vehicles carrying goods worth Rs 1.8 million on Sunday and Monday as well.  A team of Area Police Office, Rangeli, impounded a pickup with registration Me 1 Ta 4305 carrying readymade garments worth Rs 1.7 million from the Amardaha-Patthari road section of Sunbarshi Municipality. The goods were imported by Basnet Suppliers from India. The supplier had furnished fake invoice at the customs office to evade duties. Similarly, Area Police Office, Rani, on Sunday seized clothes and foods worth Rs 118,590.

Meanwhile, officials of Morang Trade Association have requested Additional Inspector General of Police Pashupati Upadhyay, the police chief of Province No. 1, to take needful measures for stopping smuggling. Speaking at a program organized by the association in his honor, AIG Upadhyay assured the traders that the police will coordinate with all concerned bodies to stop smuggling of goods.

Central Committee of the CPN (US) meeting today
30 minutes ago