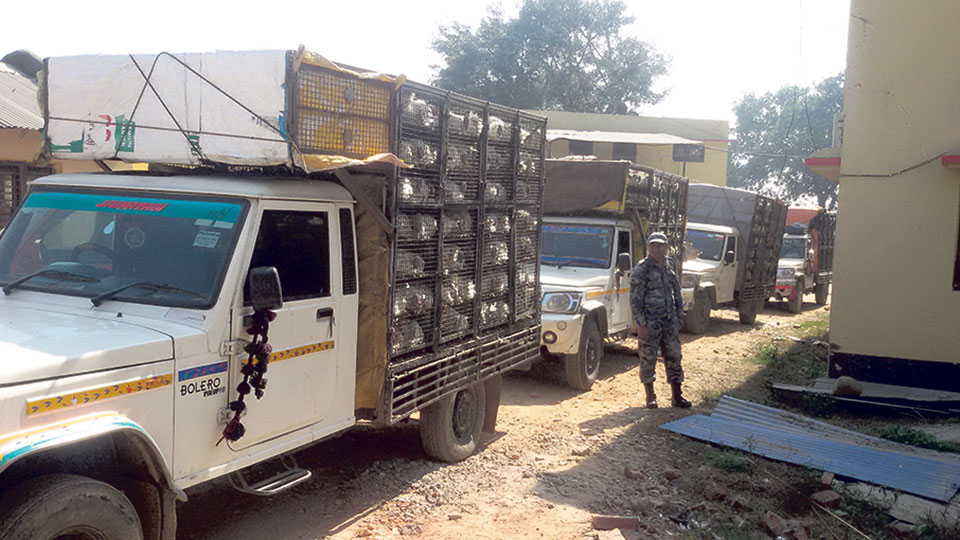 SIRAHA, Feb 12: It has been revealed that some traders are smuggling chicken from India with the help of security personnel.

Acting on a tip-off, customs officials on Friday night arrested a group of smugglers while they were unloading huge quantity of chicken illegally imported from India from a pick-up truck in a mango orchard at Lagadigoth.

The orchard is near Area Police Office, Lagadigoth, and lies less than a kilometer from Armed Police Force Border Outpost in Sikajyoti.

The customs officials have impounded five pick-up trucks with Nepali registration and five more with Indian registration. “The drivers and importers fled when we reached the scene,” Nabin Thakur, a non-gazetted officer with Siraha customs, told Republica. “As we were only six, we couldn't take them under our control.”

A source told Republica that traders were trying to take those chickens to market areas of Mirchaiya and Golbazaar.

Thakur told Republica that they have started a further investigation against the owner of the impounded vehicles under Customs Act 2007. “We have already sent a letter to the Transport Management Office to identify an owner of these vehicles. It will help us to identify the smugglers,” he added.

Import of prohibited Indian chickens is on the rise through different customs points in the district like Bariyarpatti, Naragi, Sikajyoti and Kalyanpur, and Belhi checkpoint of Saptari. Armed Police Force and Nepal Police personnel have been deployed in all these customs points.

One held on charge of smuggling alcohol

SIRAHA, Aug 26: Police arrested a man from Budhaura border point on the charge of smuggling alcohol from Nepal to... Read More...