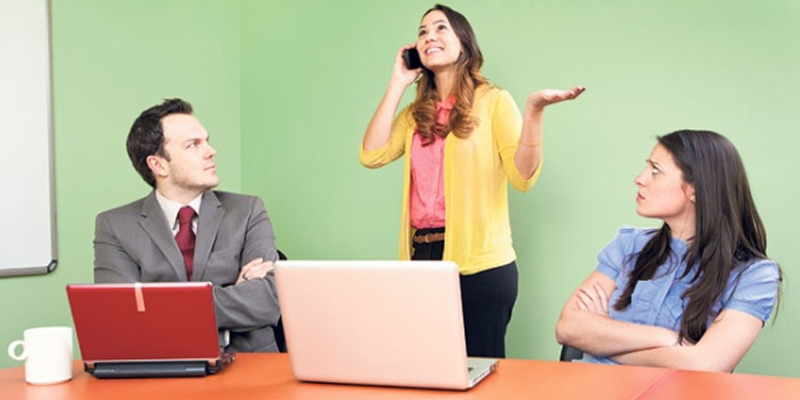 While phones evolve to become ever more‘smarter’ we seem to be going in the opposite direction with our etiquette.
My occasional trip to the movies a week ago might have been much more enjoyable had it not been for the idiot sitting a couple of rows in front of me who was constantlyon his mobile phone the entire time. Every time I was riveted to the storyline, out came his phone lit up like a Christmas tree in the darkness. His day job apparently involves saving the world because nothing else can explain the paramount importance he attached to his texting and chatting.

The last straw was when he decided, completely oblivious to the collective irritation festering around him, to make a call from his seat during a defining moment in the movie. He desisted after being told off but the sad bit is that we were willing to tolerate his uncouth behaviour for an hour and a half before we reached the end of our tether.

This email address is being protected from spambots. You need JavaScript enabled to view it.">
There is no shortage of these imbeciles in our country, but the point here is not about his lack of mobile phone etiquette but rather of our tolerance of it. Why do we put up this type of insensitive behaviour? Don’t get me wrong there are lots of annoying things people do with their phones and, just off the top of my head, taking photos of their food would be one of them.

While that really is a matter of good taste (I’m not talking about the food either) and, as much as gets on my nerves, it isn’t really any of my concern because it doesn’t affect me. What really bother me are those instances when people are so self-absorbed in using their phones that they are completely out of sync with their immediate environment and cause others in the vicinity no small amount of annoyance.

For better or worse mobile phones have become an indispensable part of our daily lives and we use it for a lot of things we should – assorted necessary tasks and for others that we shouldn’t – cheating on the exams, avoiding social situations and so on. But while phones evolve to become ever more‘smarter’ we seem to be going in the opposite direction with our etiquette.

The sort of crass conduct described above is not exclusive to movie theatres but is played out in public places and events all over the country. It’s really not alright to answer a phone during a meeting and start a conversation with the caller whilst a speaker is trying to get his point across or to shove a tablet in front of someone and obstruct their view during a concert or any other function. It’s extremely disrespectful and annoying, and surely I can’t be the only one offended by this loutish behaviour.

A case in point is when people think it is okay to carry on a conversation at top volume on their phones at any place or time (public transportation, restaurant) irrespective of how others feel about it. Whatever happened to the concept of privacy? I’d be mortified if anyone overheard details of my private life (not that I’ve got anything to hide, mind you), and here we’ve got people going off on loud monologues about how annoying their in-laws are, what they think of their boss or any of life’s other struggles. We’re bombarded with unsolicited information that we didn’t ask to know, and couldn’t care less about, and that feeling in all probability also extends to the person on the other end of the line suffering the assault on their eardrums.

The question is why are we such shrinking violets when it comes to this boorish behaviour? We will whimper about it, but grudgingly tolerate this appalling behaviour till we reach our breaking point. I’m not asking anyone to pick a fight over it (I certainly wouldn’t) but a little, perhaps gentle, reminder never hurt. Like in the case of the film ‘idiot’ who wouldn’t have been emboldened in the first place to try and make a call if someone had cut him off his during his first few texts.

Our tolerance is probably the result of being marinated every day in the general lack of etiquette and consideration for others as we go about our daily lives - think pushing and shoving in elevators, shouting at the top of your voice, jumping queues etc. As a result, we have been conditioned to suffer fools gladly but that does not make mobile phone insensitivities any less infuriating.

One can’t help but lament the deterioration that mobile phones have brought about in our manners. Now, with virtual reality accompaniments and ‘immersive’ experiences on the horizon, it might just be about to get a lot worse. While walking talking rude zombies may be a dystopian notion gone too far, it might be time to take our own small steps to curb bad mobile phone etiquette.  It might just help us preserve our mental disposition, not to mention our sanity.

This email address is being protected from spambots. You need JavaScript enabled to view it.">gunjan.u@gmail.com

We use our smartphones all the time. But are we using it smartly? Here's five smarter ways to use your... Read More...

Five most anticipated smartphones of 2017

The iPhone 7 and Google Pixel XL may have captured the market in 2016, but there still many more smartphones... Read More...

HELSINKI, Dec 1: Finnish company HMD Global on Thursday announced that it would bring a new generation of mobile phones to... Read More...

Nepal sees 12.6 percent rise in remittance inflows in the first quarter
9 hours ago

Vitamin 'A' being administered to over 2.71 million kids Thursday and Friday
58 minutes ago