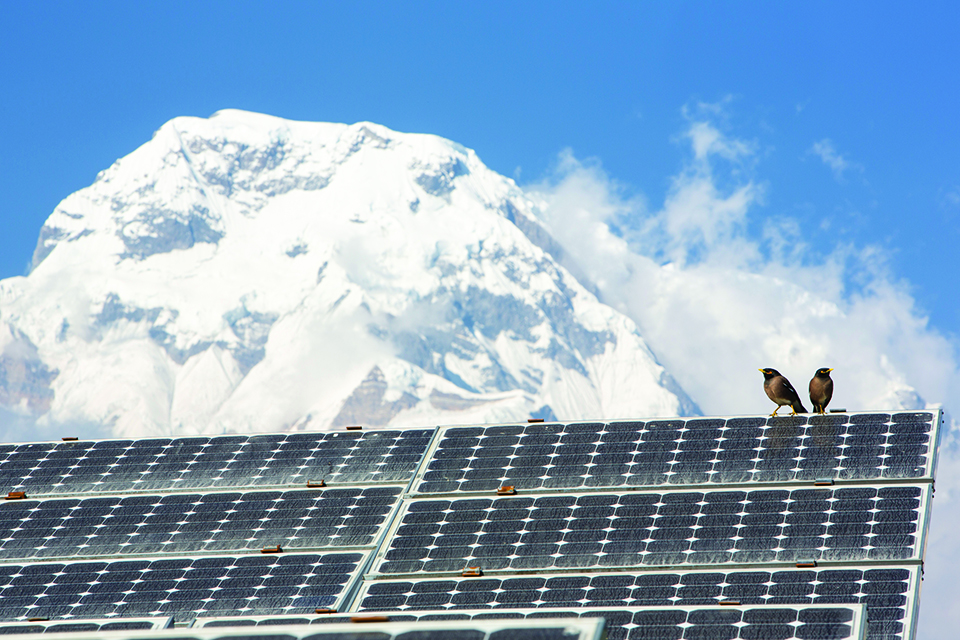 The author is the head of the climate and energy program at WWF Nepal
news@myrepublica.com

Nepal’s major energy share is still dependent on biomass. However, with access to renewable energy and different energy mix solutions in the recent years, the share of biomass in Nepal is slowly decreasing.

Nepal’s energy mix data between 2010 and 2015 shows a declining trend in biomass (from 85 percent to 78 percent respectively) and an increase in petroleum products (from nine percent to 12 percent) and renewable sources (from one percent to three percent). The energy consumption pattern of 2015 shows that 80 percent of energy is consumed for residential purposes, eight percent for industry, seven percent for transport, four percent for commercial use and one percent for agriculture.

High dependence on biomass and petroleum products for energy to meet residential demands like heating, cooking and lightning showcases the importance of enhancing renewable energy access and its share of mix both in urban and rural areas. Furthermore, the limited diversification of energy demands in other economic sectors highlights the fact that there is more to be done on the development and deployment of renewable energy in Nepal.

There are two major reasons as to why renewables have not been able to take a major share in the energy mix portfolio to meet residential demands, culture and cost. Biomass, for centuries, now has been a source of energy for cooking, heating and to some extent lighting; a culture that has passed down to generations. Moreover, it is free, and cheap availability has gotten people accustomed to it. However, on the contrary, high dependence on biomass has created a lot of health problems and is a major cause of forest degradation. A survey conducted by WWF in 2007 when developing a biogas program in the Tarai Arc Landscape, disclosed that one individual requires 4.5kg of fuel wood per day for cooking; a family of five would need an average of 20-22 kg of fuelwood every day. One can imagine the pressure this cumulative demand has had on forests for the past decades with hundreds of thousands of households majorly dependent on fuelwood. To this effect, the government and many INGOs have been promoting improved cookstoves (ICS) and biogas plants in rural and semi-urban areas.

Kerosene slowly came as a replacement of fuelwood in the late 70s, followed by Liquefied Petroleum Gas (LPG) as a replacement for kerosene in the mid-80s. However, given high costs, access to these fuels was limited to the urban centers. With growing urbanization and increase in migrating population, LPG is now slowly entering the rural and semi-urban areas. If we consider the current share of petroleum fuel usage, diesel is highest at 49 percent followed by LPG (26 percent), petrol (16 percent), aviation fuel (eight percent) and kerosene (one percent).

It is evident that Nepal needs to decrease its use of imported petroleum products and dependence on biomass (fuelwood) for residential needs for both are imminent sources of greenhouse gases. A shift away from fossils fuel is only possible if a steady move towards renewables is made. The dependence on fossil fuel is not only harmful to the climate but also has a huge impact on the country’s foreign exchange and GDP.

In addition to the promotion of biogas and biofuel, promoting the use of efficient electrical appliances powered by renewables is the new future. With renewables in place to power residential demand, emphasis needs to be made on communications targeting behavioral change to address cultural barriers while the cost could be addressed by promoting the renewable energy subsidy policy initiated by the government in both urban and rural areas. Arguably, if subsidies are not a long-term solution, these could also be replaced by attractive financial instruments or soft loan schemes.

The issue of cost, a major concern in the rural areas can also be addressed if the urban population starts developing and using renewable sources of energy like solar to meet their residential demand. This can create opportunities for the government to divert its investments from importing petroleum to other forms of renewable energy such as hydropower or solar grid systems that will, in turn, meet the population’s energy demand and promote a more effective use of renewable energy.

An overnight change is difficult to achieve but with small steps towards a bigger stride, shifting to renewable energy is a long-term solution to meet Nepal’s energy demands and create an improved renewable energy mix while creating positive impacts on the environment.

“Mummy, my friend has called me to visit Pashupatinath Temple”, I said. I was very eager to visit the temple... Read More...