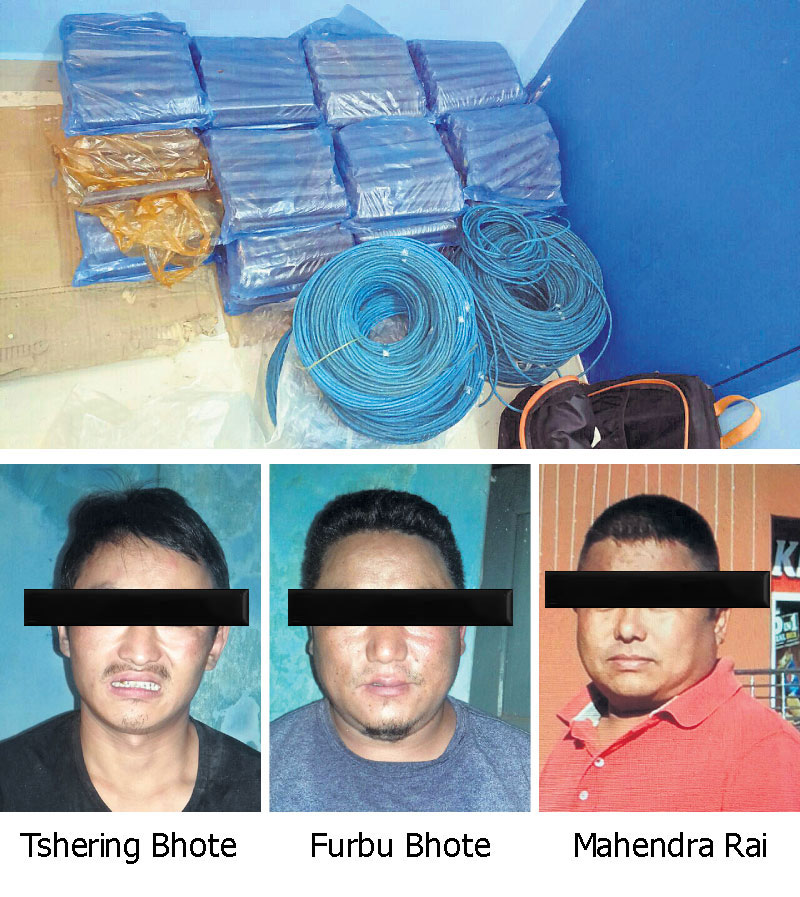 -3 were arrested in Nepal, 3 in India
-609 gelignite sticks, 200 detonators and 640 meters of cordex wire seized
-Police trying to establish their involvement with armed, underground groups if any
KATHMANDU, Nov 30: Nepal Police and Indian police have separately arrested six Nepali nationals accusing them of being involved in transporting huge quantity of explosives from Siliguri, a city in West Bengal of India, to Nepal.

Tipped off by a special source, the Siliguri Police on November 6 had arrested three Nepali citizens in Siliguri in illegal possession of explosives and had sought support from the Nepal Police to investigate the matter. The three were arrested with 609 gelignite sticks, 200 detonators and about 640 meters of cordex cables.

Those three arrested in India have been identified as Dawa Tshering Bhote, 50, of Hatiya VDC of Sankhuwasawa district and currently running a teashop near Railgate in Darjeeling, his spouse Puja Limbu and Krishna Prasad Adhikari, 34, of Nangin VDC-4 of Paanchathar district.

“Based on the information provided by the Indian police, we have arrested three Nepali citizens allegedly involved in bringing some explosives to Sankhuwasawa district from Siliguri,” DIG Bam Bahadur Bhandari, chief of the Special Bureau of Nepal Police, said.

Investigations have revealed that an unidentified man in Nepal had ordered those explosives from Siliguri but he was never seen again after some of the explosives were transferred to Nepal.

“After the unidentified man didn't show up for long, Dawa and his wife decided to sell those explosives in the illegal market and handed the responsibility to Adhikari,” DIG Bhandari said citing the Indian police. The case was exposed while finding customers, he added.

During further investigation, it was revealed that Furbu and Tshering had met with Dawa in Siliguri and brought some explosives to Nepal and handed them to Rai, the headmaster of the local school. The two were later arrested from a hotel in the bordering town in eastern Nepal and Rai was arrested from his village.

DIG Bhandari said, “We are trying to ascertain whether the trio had some links with some armed and underground groups active in eastern parts of Nepal.”

According to the Special Bureau, the connection between those arrested in Nepal and India has been established and they have confessed to the crime. But police have remained clueless behind the motive of transporting those explosives.

However, Rai has been claiming that the explosives were meant for fishing, according to the District Police Sankhuwasawa.

In the past few months, Nepal Police has been focused on containing various armed outfits active in the hills as well as Tarai districts. The police have arrested leaders and cadres of Mongol Mulbasi Rastriya Force, Mongol National Force, Mongol Mulbasi Force (Kinrati) and Samyukta Jatiya Mukti Morcha among others with explosives and illegal arms.

Three arrested under suspicion of trafficking girl to India

One dies, another gets injury with electric shock
16 hours ago

Truth is a process
22 hours ago

Is the 8.5 pc growth target achievable?
23 hours ago