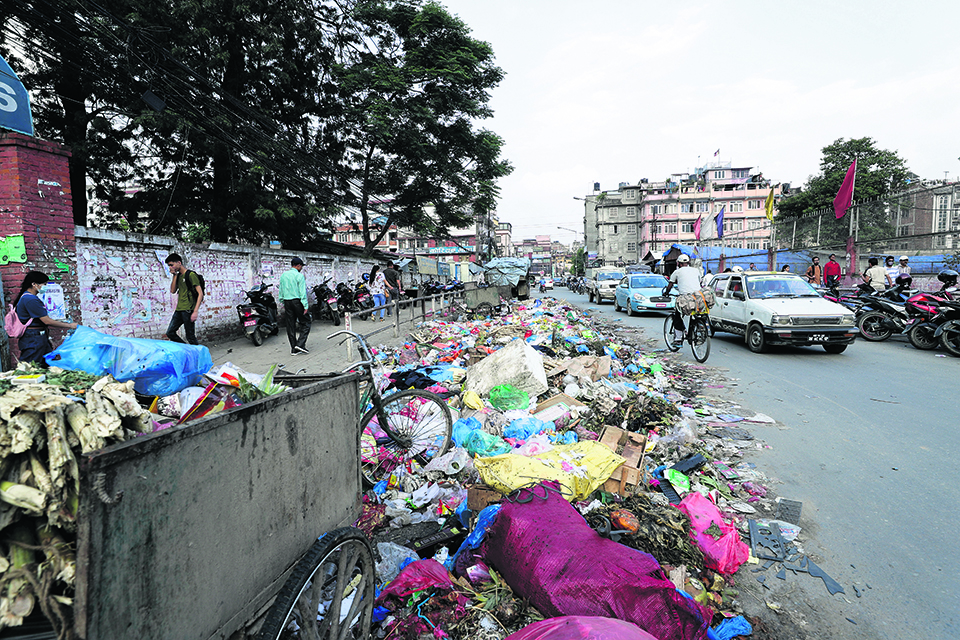 Garbage dumped at Bhrikutimandap, Kathmandu as seen in this photo taken on Saturday. Waste management has remained a problem in the Kathmandu Valley. Prakash Shrestha/Republica

KATHMANDU, June 30: Unbearable garbage stink has hit residents of Kathmandu Valley for the past few days.

Due to the ongoing protest of locals from Sisdol, Kakani rural municipality of Nuwakot district the Kathmandu Metropolitan City has been unable to throw the garbage in the landfill site. Locals have been taking to the street demanding compensation from the government for the inconvenience caused by the landfill site.

Spokesperson of Kathmandu Metropolitan City (KMC), Ishwor Man Dangol said that the KMC and District Administration Office will negotiate with the locals to resolve the issue. “The government is trying to solve this problem as soon as possible”, Dangol added.

The locals have allowed KMC to use their land as an alternative dumping site but the government has yet to make a decision in this regard.

Dangol further informed that the locals are demanding compensation that exceeds the amount quoted by the government. On top of that, they are also demanding health insurance and a 25-bed hospital in the area.

“Irrespective of the ongoing talks between the concerned authorities and the agitating locals, KMC will clear the garbage from the city," said Hari Kumar Shrestha, chief of the Environment Management Department of the KMC.

"There is a possibility of contagious disease spreading among people especially during monsoon in the area affected by garbage stink. Therefore, it is urgent to clear the garbage from the city”, he added.

The valley produces around 1,000 metric tons of garbage on a daily basis. The figure reaches around 1,200 metric tons during monsoon. The garbage thrown in Sisdole accounts for 75 percent of the total garbage produced in the valley.

KATHMANDU, Nov 4: At least 58 metric tonnes of solid waste have been managed under clean-up campaigns of different rivers... Read More...

KMC against govt decision to add 1,500 taxis in Kathmandu

KATHMANDU, June 21: Expressing dissatisfaction over the government's decision to register 1,500 new taxis in the name of earthquake survivors in... Read More...

“Mr Prime Minister, how would you feel if you didn’t get a kidney ahead of transplantation?” (with video)
4 hours ago

What we saw at Teku Hospital (photo feature)
4 hours ago
Oppn parties fail to secure majority seats in parliament to form new govt, Oli likely to be reappointed as new PM
2 hours ago

Where to contact if someone needs Remdesivir?
13 hours ago
Sagarmatha sees first deaths of 2021 expedition
12 hours ago

Kathmandu DAO urges hospitals to not create panic
13 hours ago