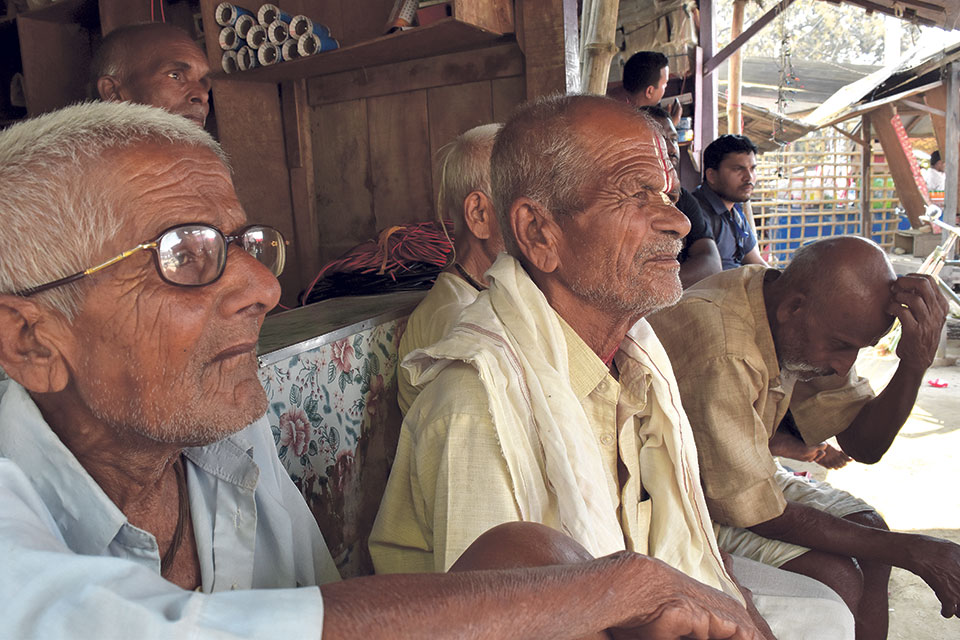 Mithilesh Yadav/Republica Senior citizens of Siraha look at the project site after laying of the foundation stone.

SIRAHA, March 27: Locals of Bariyarpatti in Siraha are hopeful that their decades-long dream of Hulaki Rajmarga will materialize soon.

The laying of foundation stone of Bariyarpatti section of the highway by CPN (Maoist-Center) Chairman Pushpa Kamal Dahal has yet again raised their hopes. However, they are not fully convinced that the highway will be completed as the process of inaugurating, and abandoning the construction midway dates back to the age of Rana rulers.

“We are glad to know that construction of Hulaki Rajmarga will begin soon. I hope they won’t disappoint us this time,” Laxmi Yadav (80) told Republica.

Another local, Ganga Prasad Yadav, said: “We have been hearing about this project since our childhood days from our grandparents. But it hasn’t materialized yet.

Stating that politicians cannot be trusted, Raslal Yadav (82) said: “Foundation stone for the road section has been laid time and again since the Panchayat era. I hope it will be completed before I die.”

Krishna Man Shrestha, another local, said he was hopeful of seeing completion of the project. “Politicians normally do not return to rural areas after election. However, this time a former prime minister has laid the foundation stone. So, I am hopeful that construction will begin soon,” he added.

The tarai region, which covers 17 percent of the country, is considered granary of Nepal. However, as the highway construction work is not taking off, this has not only crippled transportation in southern Nepal, but has also made the country more dependent on imported food materials, according to Bijaya Prasad Mishra, an expert on Madhes affairs.

According to Mishra, transport of food and other commodities to southern Nepal is becoming difficult due to delay in construction of Hulaki Rajmarga.

KATHMANDU, Nov 10: A parliamentary committee has directed the authorities concerned to accelerate the ongoing road-widening project in the Kathmandu... Read More...