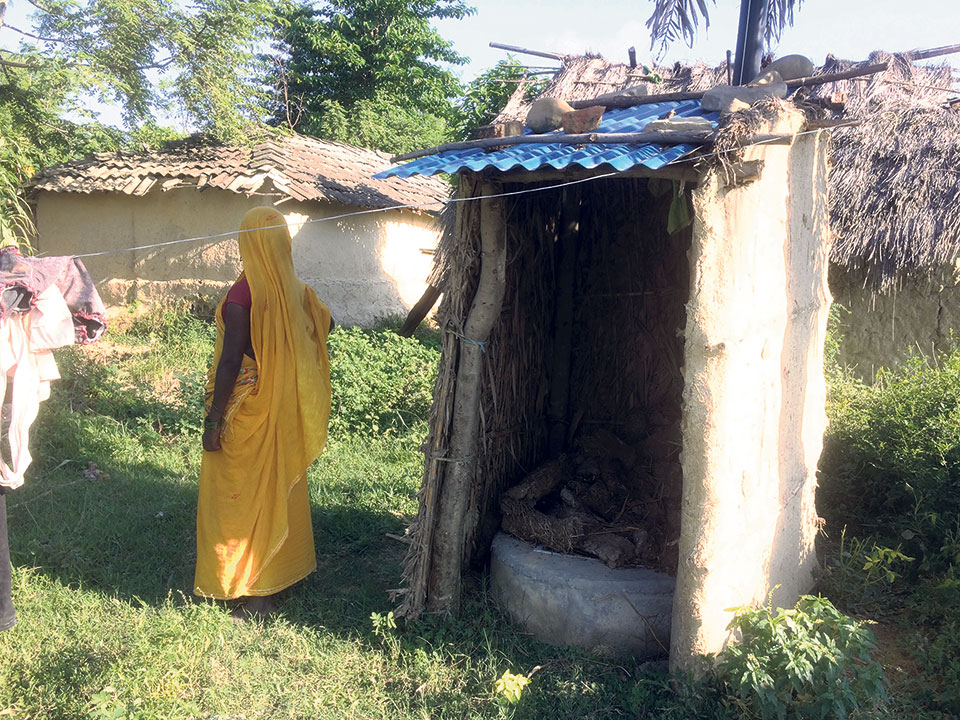 Cow dung cakes kept in the toilet of one of the locals of Siraha, which recently gained ODF status.

SIRAHA, March 24: Three months ago, Rebati Saday of Lahan-1 used her ring as collateral to obtain loan from her landlord for constructing toilet in front of her dilapidated hut. Unfortunately, she had to stall the construction of her toilet in lack of adequate money. She wandered from place to place seeking loan but to no avail. No one is ready to trust her.

Rebati and her husband are currently living in an unregistered plot of land along with their two children. Her husband Sanjay works as a porter in Lahan Bazaar. This family is struggling to make their ends meet as Sanjay is the sole breadwinner of the family.

In recent days, the local authority has made it mandatory for the squatters here to build toilets at their homes. This has added to the plights to the already poor squatters and other underprivileged groups. Those who practice open defecation are arrested by security personnel.

“Government officials think that we are knowingly neglecting their decision but they don’t know that we already have so much loan on our heads,” said Rebati. According to her, landlords do not agree to provide them much loan as they do not have a fixed source of income.

Similarly, the life of Manju Saday of the same community is equally pathetic. It has been months since she has been sheltering in her neighbor’s home after her hut was blown away by wind. She was having sleepless nights thinking about how she will be able to rebuild her hut and now she has an added burden of building a toilet too.  “I am tired of asking for loans and now I don’t think even landlords will be ready to provide me loans,” said Manju.

Mina Paswan of Siraha Municipality was already struggling with heavy debts and now she has been instructed to build a toilet. Mina, who works in the field of her landlord, said, “Only we know how hard it is to fulfill our needs by working just three months a year.”

Living in unregistered land, these people hardly have space for building toilets. Whoever are capable of building toilets have been compelled to build toilets attached to their kitchen and beds. The bad odor released from toilet has suffocated the squatters. According to Sukani Saday of Dhangadhimai Municipality-3, Hanumannagar, it would have been better had the government rather built a public toilet in their community.

After being tired of paying compensation to the police for practicing open defecation, Sakuni decided to build a toilet. Despite her will, she could not do so as her landlord didn’t allow her to dig the land behind her hut for toilet. Now, she has only one option and that’s to build a toilet attached to her kitchen and bedroom.

Despite building toilets, many squatters do not use it. ‘If practicing open defecation leads to diseases, how healthy is it to build toilets in front of our kitchen?’ is the question asked by squatters to the responsible authorities.

Many declared ODF zones without proper study
In June, locals of Laxmipurpatari Rural Municipality, Sitapur suffered from a dysentery epidemic. After struggling for days, Mangain Yadav, 70, lost his life to the epidemic. Two days later, another person of the same community died of the same illness.

As informed by Chandra Prakash Pandit, former in-charge of Sitapur Health Post, rain water washes away human feces from the grounds and when they mix into the pond that led to epidemic. As most Musahars rely on pond water for cooking and cleaning, they become prone to dysentery. It had been two years since this place was declared an ODF zone based on the report that all houses have toilets and all of them are in use.

Rs 5 million spent on a program for inviting chief minister
On Friday, District Sanitation and Hygiene Coordination Committee (DSHCC) declared Siraha the first district in Province 2 to gain ODF status, amidst a program. Chief Minister of Province 2 Lal Babu Raut was the chief guest of the program. Reportedly, a huge budget of Rs 5 million has been allocated for the lavish gathering. Various artists have been invited for performing and hosting the program.

Expensive hotel rooms have been booked for the guests who have come from various parts of the country for attending the program. According to Nepali Congress (NC) leader Shailendra Yadav, lavish gathering organized by spending such a large amount of money is not fair especially when poor people in the district have been debt-ridden just to fulfill this campaign.

“There are no toilets in many homes of the district,” said Yadav, adding, “It is shameful that the sponsors of this program do not have money to provide to the target groups but they can spend millions for such programs.” He further stated that the program has delivered a wrong message among the locals.

Reality
The government had announced to declare Nepal ODF zone by 2017. Since then, a large number of I/NGOS have been pouring foreign aid in addition to the government funds for this campaign. But the money and aid have been used only for trainings, allowances, salaries of the government officials, programs, visits and transportation.

Siraha has been declared ODF zone on the basis of the report which states that 118,962 households of Siraha have toilets. But in reality, 20 % of the constructed toilets are not in use and 10 % of the households do not have toilets at their homes.

MANANG, July 3: Mountainous district Manang has gained the status of an Open Defecation Free (ODF) zone as 1,265 out of... Read More...

The government itself is breaking the law
21 hours ago

Rani Pokhari to be inaugurated today
6 hours ago

How Israel failed its Covid test
6 hours ago

One killed, 14 injured in Dailekh bus accident
21 hours ago