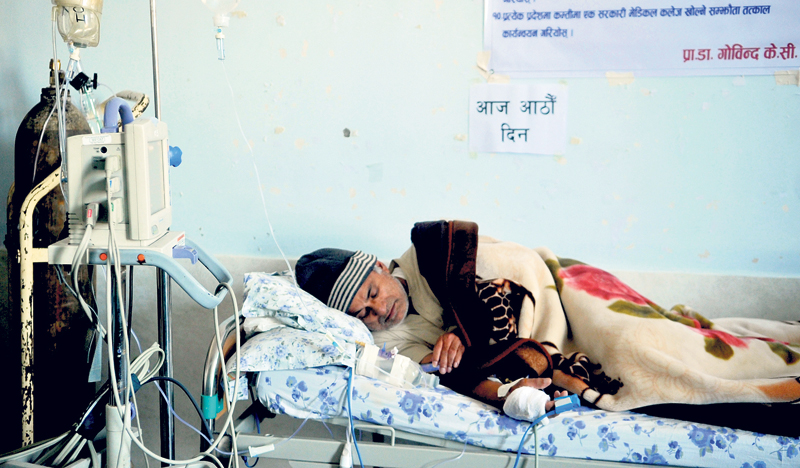 At a time when Dr KC, a senior orthopedic surgeon at the TU Teaching Hospital (TUTH) has been calling for Dr Singh to resign the post to pave the way for appointing a new dean on the basis of seniority, IOM Dean Singh has said that he would form a committee comprising senior professors to formulate criteria for dean appointment.

“I will officially announce a five-member committee on Monday,” said Dr Singh. “I wish that Dr KC would not have to stage hunger strikes anymore over dean appointment,” he claimed. “However, TU is the final authority to set the rule for dean appointment.”

Dr Singh does not appear interested in resigning his post. “I was also appointed as per the TU rules. Seniority is not the only criterion as there is no strict rule on dean appointment as demanded by Dr KC,” he said.

On the eighth day of his fast-unto-death, the condition of Dr KC is deteriorating, according to doctors attending him. Dr KC began his 10th round of fast-unto-death on November 13 demanding several reforms in the medical education sector.

“His condition is deteriorating gradually,” said Dr Leison Maharjan, president of the National Resident Doctors' Association (NRDA). “Dr KC has been administered oxygen and IV fluids copiously,” he said. “His heart beat is unstable, has developed muscle cramps, and he is very weak. He has become prone to infections because his WBC count has dropped.”

The resident doctors working in black armbands started from Wednesday continued today too, expressing solidarity with Dr KC's movement, according to the NRDA.

There are about 250 to 300 resident doctors in TUTH and around 2,000 people from across the country visit TUTH every day for treatment.