Sindhupalchowk's Majhi people help each other to rebuild homes 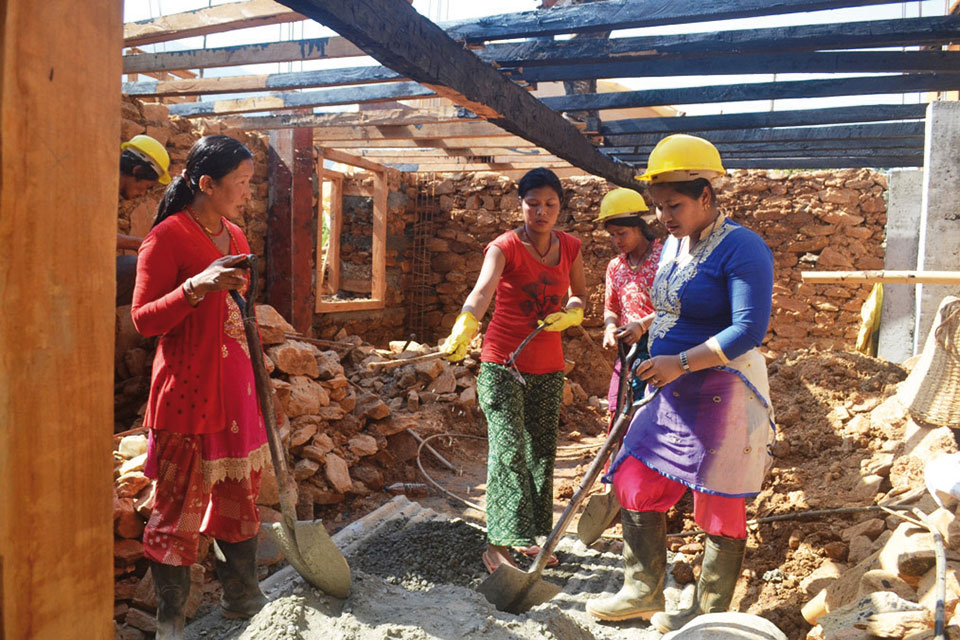 People from Majhi community helping each other rebuild their homes in Bhimtar village of Sindhupalchowk district earlier this week. (Durba Dangal/Republica)

SINDHUPALCHOWK, March 17: Three years after the devastating Gorkha earthquake in 2015, reconstruction activities are finally reaching the underprivileged communities of the country.

Of late, people of disadvantaged communities, such as Majhi, could be seen rebuilding their homes in districts including badly ravaged Sindhupalchowk.

In Sangachowk of Bhimtar in Sindhupalchowk Sani Majhi, a local, was seen helping her husband Purna in building their home. Another local, Sitaram Majhi, also recently completed constructing his home. He is currently fitting windows in the house. Just a few yards away, a group of 10-12 workers were seen plastering with cement the walls of an under-construction house belonging to Man Bahadur.

The situation is similar in the neighboring Ekleyfanta village. Everywhere new houses are rising and these indicate that even the most underprivileged communities have starting rebuilding their homes.

"People in the neighborhood have been helping each other to rebuild the house. This has made the construction easier," said Sitaram, 27.

Most of the people from Majhi community are traditionally fishermen eking out their living from the Indrawati River. Apart from their small houses, most of them do not have farms and lands. They are severely lagging behind in economic, social and educational development.

Lately, most of them make their living by crushing stones into aggregates on the banks of the Indrrawati River.

"So far, we haven't spent any money in wage of labors. The only spending has been on purchasing construction materials," said Sitaram.

Interestingly, female population in the village has been playing significant roles in reconstruction. Over half the population helping to construct houses on turn-by-turn basis is female.

Sindhupalchowk's Majhi people help each other to rebuild homes

Asparagus price reaches Rs 5,000 per kg in local market due to surging demand amid low supply
2 hours ago

31 staffers including a justice of SC contract COVID-19, apex court to hear only six types of cases from tomorrow
3 hours ago