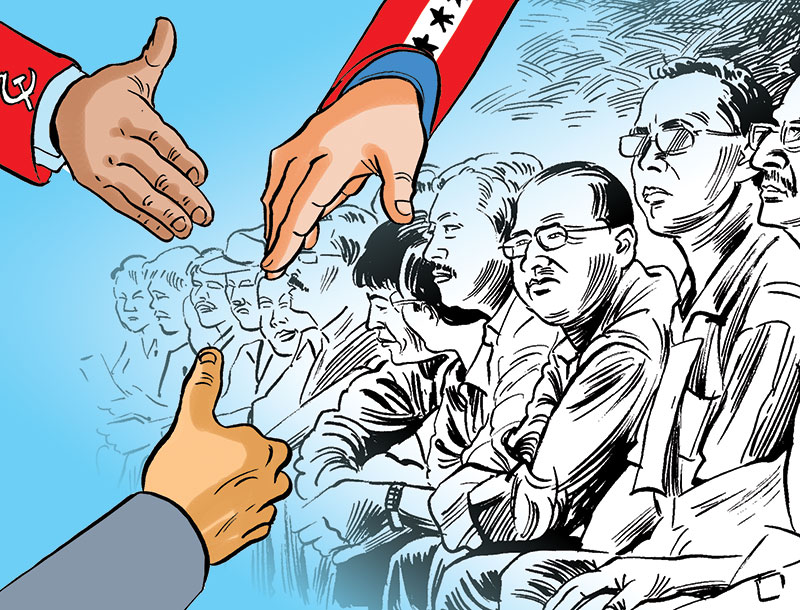 As things stand, most public intellectuals hesitate to take sides even on issues that do not require any ifs and buts
This day last week was the first ‘anniversary’ of India-imposed economic blockade. It was also the day when some of the noted intellectuals were reviled in social media for their silence and even support of blockade. Like politicians, Nepal’s intellectuals often become subject of scorn. They are criticized for being divided and not raising a uniform voice during the most critical times. This is not just an allegation.

As things stand, most public intellectuals hesitate to take side even on issues that do not require any ifs and buts. Dr Govinda KC’s crusade against medical mafia and his campaign for sweeping reforms in health sector is one issue that merits blind advocacy and blanket support. You do not have to think to say Gangamaya’s hunger strike for justice is right. You do not need to pause to say CIAA Chief Lokman Singh Karki’s excesses should be checked. You do not need to think a minute to condemn Indian blockade and India-instigated Madhesh agitation, in which above 50 people were killed, which cost about Rs 150 billion to our economy and which nearly shook the foundation of national unity.

But how many of us have openly supported Dr KC and Gangamaya and spoken against Karki? Some intellectuals even supported inhuman blockade by invoking “internal causes” premises. For them, it was as if the blockade had been imposed by the government of Nepal. If the civil society, media and public intellectuals had taken a uniform stand against blockade, it would have been fast internationalized, and perhaps lifted earlier than February 5, 2016.

Thus intellectuals need to be serious about this oft-heard resentment: yo buddijibile bigareko des ho (this is the country ruined by intellectuals). This article takes up the issue of divided intelligentsia and examines it against some historical context. But given the state of division among intellectuals (one group of intellectuals refuses to recognize the other as such, each claims to know better than others, making it difficult to say who the intellectuals are), the term needs to be delimited first. In this article, the word intellectuals cover members of civil society (since civil society we know today comprises renowned academicians, senior journalists and educationists), commentators and opinion makers who can influence and make a difference through their speech and writing.

Why is our intelligentsia helpless, divided and silent during the most critical times? One common explanation is sabai bikisake (all have been sold out). Other explanation is they fear to lose privileges that subservience to power centers bring. What an insult to nascent intelligentsia!
In his 1784 essay “What is Enlightenment?”German philosopher Immanuel Kant forwards a compelling explanation as to why a man cannot reason independently. He argues that a man cannot speak up against the authorities primarily because he chooses to live in the comfort of “self-incurred tutelage”—the self-imposed ignorance, obedience and subservience to authority.  And this tutelage occurs, he argues, because of laziness and cowardice. The select few on the top perpetuate this tutelage to lead the general public to the “harness of the cart to which they were tethered.” How far and whether our intellectuals have broken free from shackles of tutelage makes for another article, but by all accounts Nepal is not one of those countries with inspiring history of intellectual growth.

During the Rana rule, when Nepal’s history of modern education is generally traced, the goal of education was not to produce critical public intellectuals. Educational practices were copied from Indian educational system, which was modeled on colonial British education. The objective was to produce clerical workers rather than scholars, technicians, professional people and decision makers. About the pre-1950 education system, Dor Bahadur Bista comments in Fatalism and Development, “the educational system produced recruits for the government, typically for communication with foreign powers. Most professional in Nepal, at that time, whether doctors, engineers or architects, were not the products of the Nepali educational system but were graduates of Indian schools.”

So when the country was opened to the outside world for the first time in 1950, write Horace B Reed and Mary Jane Reed, in Nepal in Transition: Educational Innovation, Nepal had only 300 college graduates.

Nepal’s intellectual sphere widened for the first time after the establishment of Tribhuvan University in 1959. The number of public intellectuals began to grow as university education became available to wider masses. But the system of the day required them to speak only what it wanted to hear.

Post-1990 was the perfect time for growth of public intellectuals because education that was confined to Kathmandu earlier began to reach far-flung corners of the country as well. So in 26 years we should have had a vibrant, assertive and vocal intelligentsia.

“Do not keep that expectation. The critical public intelligentsia you are talking about does not exist in Nepal,” Dr Devendra Raj Panday, a renowned public intellectual and the leader of Citizens’ Movement for Democracy and Peace which was instrumental in anti-monarchy movement of 2006-7, told me during a conversation last month.

“Ours is not the country with secular growth of intelligentsia,” he said. “That there should be a group of people to debate issues of public importance was not in our culture. All that we were taught to be after going to the university was become a jagirre (jobholder).”

But didn’t anyone try to go against the tide? “Sukraraj Shastri had dared but he suffered the consequences. After 1950, the few intellectuals we had turned into Congress followers overnight,” Panday reminisced the 50s. What about Panchayat? “It co-opted the civil society and few intellectuals the country had,” he explained.

Panday also believes most conducive period for healthy growth of public intellectuals could have been the 1990s. “It was justified of intellectuals to be politicized before 1990 because the parties were banned. After 1990 they should have been depoliticized because parties became legal,” he continued. “The opposite happened. For the spoils, money and posts, the members of potential intelligentsia got divided.”

Panday told me of how public intellectuals had almost come together during CMDP. “But once the parliament was reinstated by the king in April 2006, we all became what we were before: followers of Congress, UML and other parties respectively.” I should add India to this list.

It’s difficult being an intellectual here. There is labeling, stigmatization and compartmentalization.

During the Panchayat, if you spoke for freedom, you’d be called ugrabadi (extremist) and prosecuted. During the early decade of this century if you advocated bringing Maoists into mainstream politics, you would be called a Maoist; a reactionary if you opposed Maoist violence.

Those of us who speak for hill-plain interdependence and who strongly opposed Indian blockade, not surprisingly, must have been portrayed as followers of CPN-UML and even King Mahendra. Such risks are always there.

But this should not deter the learned class from speaking up when the country is under attack or when justice, governance and public welfare have been hijacked by select crooks. Intellectuals, especially those from the comfortable class, are expected to speak on behalf of the poor and during the critical times because they can afford to do so. In a society with a vibrant civil society and a vocal intelligentsia, the commoners do not have to worry much because intellectuals speak for them. Clearly, that is not the case here.

We live in an age when, so long as we are also the part of pervasive social media network, what we do, what we speak and even what we think is under the scanner. Intellectuals of our time are under constant media gaze. We are like naked travelers in the realm of intelligentsia. The gravest dishonesty is when you compromise your convictions, lie to yourself and mislead the masses for the cause that you know is wrong. “It is the responsibility of the intellectuals to speak the truth and to expose lies,” says Noam Chomsky. How long will Nepali intellectuals get the liberty to be called intellectuals without fulfilling this basic duty?

Why authorities are silent on the incidence of break down?

KATHMANDU/ NEPALGUNJ, August 1: A week has elapsed since the main canal of Sikta Irrigation Project broke down during testing but... Read More...

KATHMANDU, June 5: ​Row over a provision in the parliament regulation has not only widened the rift between the ruling and... Read More...