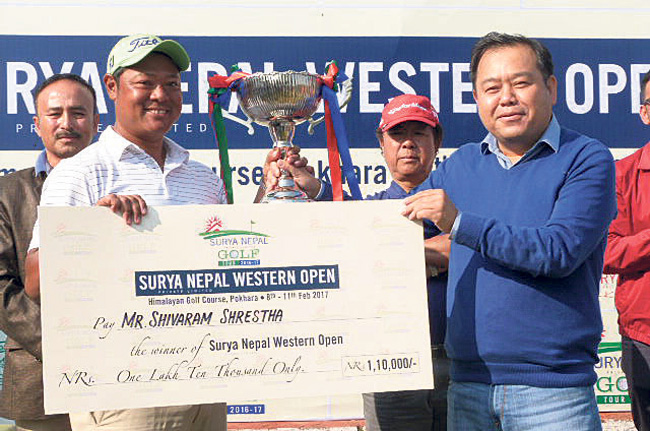 Shivaram carded six-under 64 for a total score of nine-under 201 in the third event of the Surya Nepal Golf Tour 2016-17. The RNGC pro, who had earlier won Surya Nepal Eastern Open in Dharan and Surya Nepal Challenge in Kathmandu in the current season, registered a nine-shot victory over Bhuwan Nagarkoti.

As the champion, he went home richer by Rs 110,000 besides receiving the winner’s trophy.

Bhuwan, the second place finisher, carded two-under 68 in the third day for a total score of even-par 210. Runner-up Bhuwan earned Rs 70,000. Defending champion Dhana Bahadur Thapa shot one-over 71 in the final round to finish third at two-over 212 and got his share of Rs 50,000.

Kamal Tamang became the amateur section winner with a total score of 11-over 221 after he carded four-over 74 on the final day. Yuba Raj Bhujel secured second position in count back after being tied with Mithun Rai at 234. Both Yuba Raj and Mithun played nine-over 79 on final day.

On Friday, Shivaram started with four-shot advantage over Dhana, who cut the deficit to three strokes at the completion of front nine. Dhana carded one-under 34 on the front against even-par of Shivaram. However, in back nine, Shivaram came up with impressive scores of six-under 29 while Dhana slipped to third after he played two-over 37. Bhuwan replaced Dhana on second place with one-over 36 and three-under 32 on either halves.

Shivaram carded a birdie on the fourth hole and bogeyed on the ninth hole before taking the turn. In the later half, Shivaram carded six birdies on holes 10, 11, 15, 16, 17 and 18.

Bhuwan dropped a shot on the ninth after saving pars on the first eight holes. In the back nine, he sank an eagle on the 15th hole and carded birdies on the 11th and 17th holes. He faced a bogey on the 12th hole. Dhana carded birdies on the third, eighth, 15th and 18th holes against bogeys on the ninth, 10th and 12th holes and a double bogey on the 11th hole.

The tournament will finish on Saturday after pro-am event.