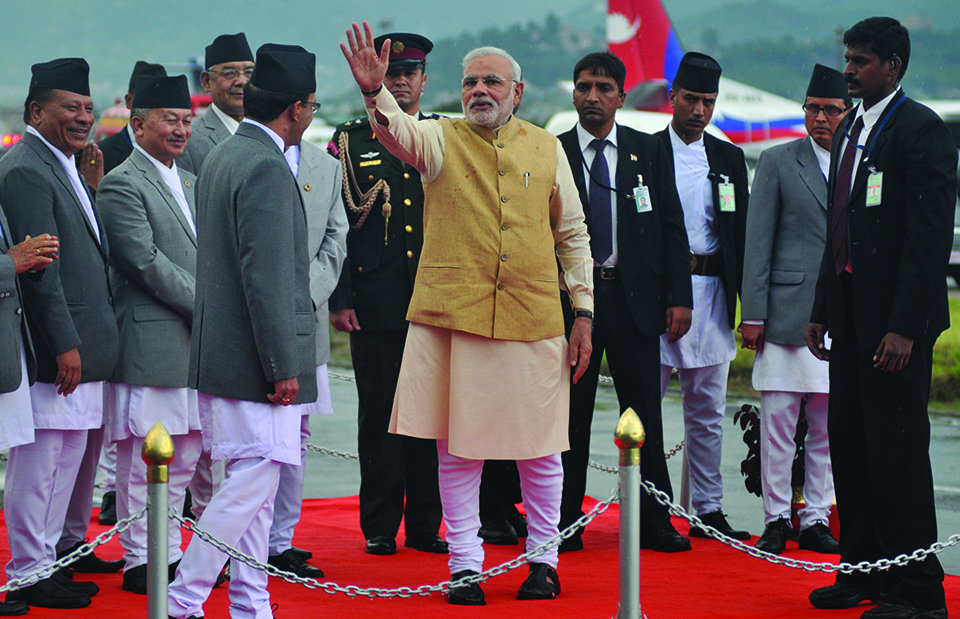 India’s Prime Minister Narendra Modi is coming to Nepal on Friday. This is good news. Modi is a leader of a great country and a statesman of international stature. As the leader of India and a friend of Nepal we should welcome him warmly. As neighbors and friends we do have occasional problems and misunderstandings. But as Francis Bacon once said: “A principal fruit of friendship is the ease and discharge of the fullness and swellings of the heart, which passions of all kinds do cause and induce.” Modi’s visit is one more opportunity for both India and Nepal to close the trust gap that had increased after 2015, principally after Nepal’s refusal to postpone constitution promulgation and the decision of Indian government to “teach” Nepal a lesson through unannounced blockade. The effort backfired as it should have.

However, all that is of the past. We must now look for a better future where we remain sensitive to each other’s national interests while remaining committed to dignity, prosperity and wellbeing of our peoples. It should be an opportunity to “ discharge the swellings of the heart” in a ambience enveloped in the divine spirit of Mukti Nath and Janaki Dham, two religious sites that are of enormous significance to Hindu identity all around the world.

Nepali leaders—from the left, right and the center—know well that geographical, economic and cultural ties that two countries share cannot and should not be ignored. They are also aware that India has, as of today, a tremendous leverage over Nepal that has sometimes been misused by its “babus” ironically against their own national interests. Coercive diplomacy has occasionally characterized relationship between our two nations damaging in the process the goodwill that Nepali people have towards India. At times, however, Nepali leaders have also failed to act in accordance with the interest of our own people and presented themselves as vacillating and unreliable partners interested only in remaining in power even if it means making commitments that cannot be fulfilled. The future demands a change in both perspectives and the design of a new vision that takes into cognizance the emerging geo-strategic reality of the region.

In our world of nation states foreign policy is an instrument for achieving national interests. It can be based on hegemonic or cooperative framework or some combination of both. Whatever the choice, the policy pursued is heavily influenced by a set of assumptions about the distribution of power between nations. When India was under the yoke of colonialism Britain was the master of the ocean and was one of the most important world powers while China was a declining power. Perhaps recognizing this ground reality, then Nepali Prime Minister Jung Bahadur Rana agreed tacitly to put Nepal under British ‘sphere of influence.’ The Indian independence struggle rejected this doctrine and viewed it as a remnant of colonial era.

However, after the independence Jawahar Lal Nehru basically followed the old doctrine which eventually came to be known as the “Nehru doctrine.”

In Nepal, Nehru doctrine had to face two major obstacles. First, Nepali leaders and Nepali monarch  were  conscious and determined to maintain the status of Nepal as a sovereign and an independent nation that would chart its own destiny while trying to  remain a close and reliable  friend of India. Second, the rise of China had changed the geostrategic reality of the region. China was no longer a declining power like in the 19th and early 20th century. It was emerging as a powerful nation determined to assert its role in international polity under a communist regime. This changing dynamics was ignored by policy makers in India who were not willing to examine relevance of the underlying assumptions of the Nehru doctrine.

The result has been a roller-coaster type relationship that has yet to regain a sense of stability and maturity necessary for purposeful direction. The unannounced blockade by India two years ago was an example of this phenomenon that has deeply hurt the feelings of Nepali people. For many in Nepal, it is hard to understand how a friendly nation can be generous and unkind in a span of few months—generous right after devastating earthquakes of 2015 and unkind with unannounced blockade after a few months without any concern for the millions of people suffering from the disaster.

It is high time that India should examine the relevance of some assumptions of ‘Nehru doctrine’ and try to build a new paradigm of shared concern and shared prosperity, in line with some of the speeches of Indian Prime Minister. Nepal is a small nation that does not celebrate Independence Day because it was never a colonial possession. It is this psyche that remains at the core of Nepali nationalism.

We remain between two great and emerging super powers of the world that have both a cooperative and competitive relationship that at times comes close to being fragile.  Both nations have interests in Nepal. We have to remain sensitive to this reality, understand their concern and apprehension and assure them that we on our part will do all we can to strengthen peace and friendship in the Himalayas.

Similarly, we expect our neighbors to respect our democracy and allow us enough economic space so that we can be a partner in the economic prosperity of the region that is gradually changing the old power structure on a global scale. As one of the world’s emerging economic powers, India has the unique opportunity to lead South Asia based on a liberal trade regime that allows neighboring countries like Nepal to be a part of the growth process.

Shared prosperity implies using economic leverage not to constrain a close and friendly nation or to “teach” it “a lesson” but to allow it to grow by providing more opportunities for economic interaction that adds wealth, generates income and promotes growth for both sides on a sustainable basis. This is the essence of shared prosperity that has yet to find a place at the operational level in India. It is hoped that this perspective becomes the basis for interaction   when Prime Minister will be in Nepal. It is this perspective that is the best guarantee of Nepal-India friendship gaining new heights in the future.

The author, former foreign minister, is chairman of ARPP (Nationalist)

KATHMANDU, Oct 6: Indian Ambassador to Nepal Ranjit Rae has urged all concerned not to harbor any suspicion, doubt and mistrust... Read More...