How ruling class is bankrupting nation 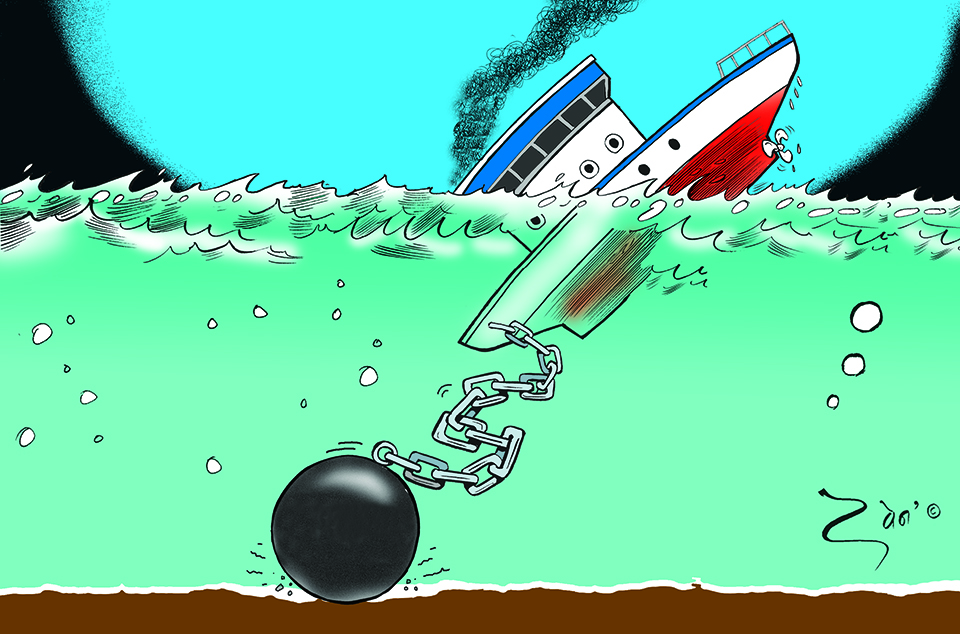 In a democracy where money is increasingly becoming an important ingredient for electoral success, the government seems at times virtually powerless

It has been a general assumption in Nepal that the country has been unable to progress because of “instability in government”. We had ten governments and annual Gross Domestic Product (GDP) growth rate of about four percent in the last ten years. Political leaders have been quick to point out that frequent changes in the government are the main culprit for our under-development.

Stability in government is a necessary condition for inclusive and environmentally sustainable development.  However, stability alone is not enough. During the Rana rule that continued from the mid 19th century to the mid 20th century, Nepal was politically stable and relatively peaceful, but there was very little economic transformation and changes in people’s lives. Stability in government can also harden the status quo and stifle chances of innovation and change. For a government that is committed to change and innovation, stability in governance can have a positive impact in the rapid growth of GDP.

Necessary but not sufficient

We have a government with a two-thirds majority in the parliament. Since 1959 this is the second time that we have had a government with such a strong mandate, the first being led by BP Koirala over fifty years ago. People are hopeful that the new and stable government for the next five years will be the basis for promoting good governance. However, the performance of the government in the last seven months has made it increasingly clear that while stability may be a necessary condition for rapid economic growth, it certainly is not a sufficient condition.

The initial enthusiasm for the Oli government has been taking a nosedive in the last few months.  The government started with promises against corruption, new policy measures to increase the efficiency of investments, strengthening of meritocracy in the civil service, cutting of fat in public spending and providing relief to the people. Since the last seven months these slogans have remained just that. The case of the appointment of new CEO of Nepal Telecom has made it clear that important positions in the country may still be open for the highest bidder. It makes a mockery of any idea that integrity, efficiency and merit will be the basis of government decisions. Similarly the gross neglect,  insensitivity  and  incompetence shown in the handling of the rape and murder  of Nirmala Pant – a case that has hurt  and upset the whole nation – has shaken the confidence of the people in the rule of law and has generated a sense of insecurity and anger across the country. On the economic front, government initiatives have shown little discipline or willingness to control expenditure and address the yawning trade deficit. A sense of confusion and chaos characterizes the current functioning of the government. It is becoming increasingly clear that the political capital associated with electoral legitimacy is being wasted rapidly.

Some important sectors of the economy that have benefitted from the flow of remittances are being increasingly controlled by the people who are members of one of the two major parties. For example, private sector investment in education for profit is rapidly growing and the investors are prominent members of the ruling or the opposition party. They have formed their own association and have gained enough clout in the political system to openly challenge any reform program that threatens their interests. In a democracy where money is increasingly becoming an important ingredient for electoral success, the government seems at times virtually powerless to reform education sector so that it becomes more inclusive and accessible to a broader section of the society. Similar is the case in health sector. The government has signed more than half a dozen agreements with Dr Govinda KC who has waged a one-man agitation against corruption in medical education. And yet the agreements are rarely honored. The simple reason is that the high and mighty and the “new rich” now in power have invested in this sector and any rules and regulations that threaten to challenge their profit becomes dysfunctional. The government has become a pawn of these interests, all in the name of the poor.

In the construction sector, which is an important segment of the national economy claiming a significant chunk of the annual budget, the story is the same. Five or six large companies with strong political connections with either the ruling or the opposition party have formed a cartel like structure that assures them the freedom to flout government rules and procedures without the fear of losing their business. Cost and time over run have become the new normal, again, all in the name of the people. The last seven months of the new government shows that it is simply unwilling or incapable of challenging the status quo them themselves are the beneficiary of the system.

Profit ambition of the ruling elites has taken a heavy toll on environment. Chure conservation is a classic example. Billions of rupees have been spent on the conservation of the Chure area and yet reckless exploitation of the river basins for sand and gravel has created havoc while the government seems incapable of stopping it. The reason is simple: political leaders at different levels benefit from this exploitation.

The Oli government is becoming a show boy for a whole host of vested interests that have made deep inroads within our government system. They are powerful because they supply resources during elections and continue to enrich those in power. It leads to a nexus among politicians, bureaucrats and corrupt businesses. All talks of democratic process, the rule of law and the interest of the common man have become a smoke screen for promoting the interest of the few at the cost of the many. A rent seeking class is the new incarnation of the old feudalistic order. It is this emerging neo-feudalistic order that will threaten democratic stability and prosperity of our nation.

The writer is the chairman of ARPP (Nationalist)