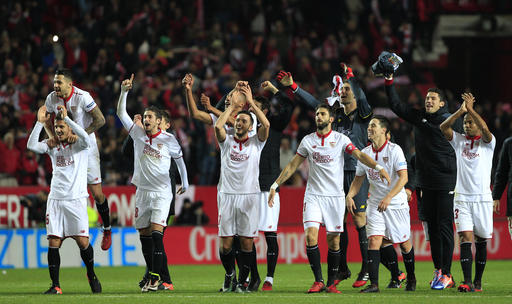 MADRID (AP) — Sevilla couldn't manage more than a 1-1 draw at Alaves on Monday, seeing its title chances take a hit in the Spanish league after both Barcelona and Real Madrid won their weekend games.

Jorge Sampaoli's team opened with a first-half goal by Wissam Ben Yedder but conceded a 75th-minute equalizer after a mistake by goalkeeper Sergio Rico.

Both teams had great scoring chances the rest of the match at the Mendizorroza Stadium but couldn't capitalize on them.

It was only the third game without a win for Sevilla in the last 12 league rounds. The other setbacks were a 0-0 draw against Villarreal and a 3-1 loss at Espanyol when it played most of the game with 10 men.

Ben Yedder opened the scoring in the 23rd minute after entering the area and firing a low shot into the far corner.

Sevilla couldn't exploit its opportunities to increase the lead before halftime and Alaves took control in the second half.

"We should have taken advantage of our chances in the first half," Sampaoli said.

Aleksandar Katai equalized for the hosts about 10 minutes after coming off the bench as Rico failed to hold on to a cross into the area. The ball ricocheted off the midfielder and went into the goal.

"There was a bit of bad luck in that play," Rico said. "But in the end we earned a point away from home and we will keep fighting until the end."

Oscar Romero, who came on in the second half and reinvigorated Alaves, provided the cross that led to Katai's goal.

"We had a lot of respect for our rival, we know that they are fighting at the top of the table," Romero said. "We were able to equalize and in the end nearly got the victory."

Alaves, which plays Barcelona in the Copa del Rey final on May 27, stayed 11th in the 20-team league with 34 points.

Sevilla, seeking its first league title since the 1945-46 season, lost ground on the top two. Barcelona routed Celta Vigo 5-0 at the Camp Nou on Saturday and Madrid won 4-1 at Eibar.

A three-time defending champion in the Europa League, Sevilla is in the Round of 16 of the Champions League. It takes a 2-1 lead into the second leg against Leicester on 14 March.