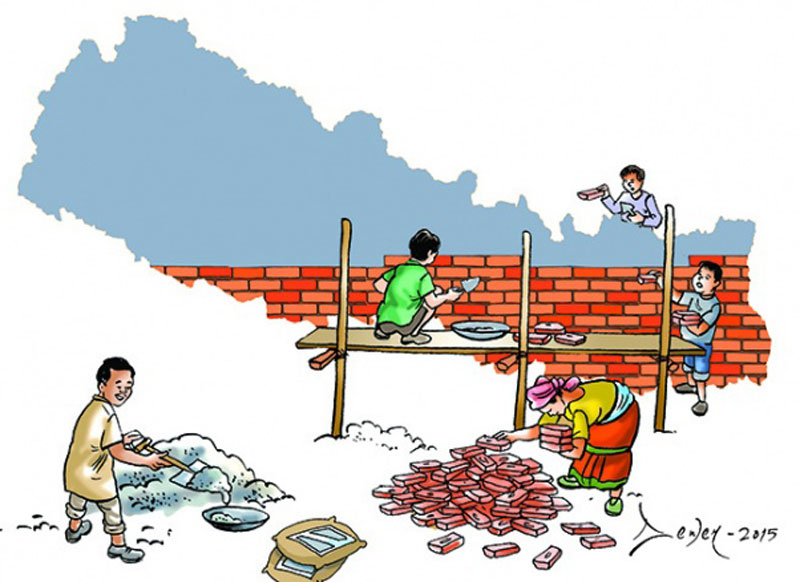 The term “disaster risk reduction” was in part coined right here in Nepal during the early 1990s, based on several pilot projects
This month, Nepal observed the 19th annual Earthquake Safety Day, which occurs around the anniversary of the1934 earthquake and serves as a yearly reminder of the importance of building a safer Nepal that is prepared for the next seismic event. With the memory of the 2015 Gorkha earthquakes still fresh in many minds,Nepal knows all too well that when it comes to disasters, it’s not a matter of if, but when.

Chronic floods, landslides, fires, drought, and earthquakes put Nepal at number 64 (out of 173) on the World Risk Index in 2016. On the cusp of being at extreme risk, Nepal is actually a great proving ground to test and perfect the art of disaster management, which would certainly help Nepalis and could provide lessons for others. In fact, the term “disaster risk reduction” was in part coined right here during the early 1990s, based on several pilot disaster management projects Nepal conducted in cooperation with the US government.

These joint efforts tested how best to mitigate and prepare for disasters and have since helped inform disaster risk reduction activities the world over. In the late 1990s, Nepal also led the way in school and hospital safety, informing worldwide programs on how to make critical public infrastructure disaster safe. Even before the United States and Nepal started partnering on disasters, Nepal was one of the first countries in South Asia to create a policy and legal environment for disaster risk management in the early 1980s.

Nepal has come a long way in disaster management since then, but there is room for improvement. For example, the 2013 National Disaster Response Framework served to promote effective coordination of disaster preparedness and response by clarifying roles and responsibilities of government and non-government entities. This Framework was utilized for the second time during the Gorkha earthquake, and has been reviewed and drilled since. However, pre-2015 regulations, policies, and frameworks failed to address recovery and reconstruction, likely contributing greatly to delays in much-needed reconstruction work after the Gorkha earthquake.

Despite these problems, the Gorkha earthquake represents a tremendous opportunity to look at disaster management with fresh eyes, learn critical lessons, and translate these lessons into action by creating more robust disaster management capacities, systems and institutions.

Disasters tax even the largest, most well-resourced governments. Eleven years ago the United States was victim to Hurricane Katrina, and we are still recovering, but we took our lessons from the Katrina experience to heart. The US government implemented more than 100 recommendations for corrective action to modify and update our disaster management systems and institutions in the years after this disaster. Among one of the important lessons was recognition that our system had become too fragmented and too bureaucratic. In response, we developed a more holistic plan establishing a single, comprehensive framework for managing disasters across all levels of government and across the whole disaster management cycle, including mitigation, preparedness, response and recovery.

That said, there is no perfect model for disaster management. Each country needs to explore what makes sense for its own context and challenges. However, there are several principles and characteristics that are known to result in strong disaster management institutions. Effective disaster management bodies are typically a single entity, as opposed to multiple, competing entities. They are legislatively—and politically—empowered to coordinate the efforts of all relevant line ministries.

Ideally, they are mandated to address the full disaster management cycle, from preparedness to recovery, and adequately resourced to do so. These entities must be accountable and transparent in their operations. They must also utilize an unbiased, needs-based approach, and should remain as protected from political pressures as possible. History has shown that as disaster response and recovery becomes political, it becomes ineffective, at best. At worst, it can cost lives.

Despite delays in ratification, the ‘Act Relating to Reconstruction of Earthquake-Affected Structures 2015 (2072)’ establishing the National Reconstruction Authority (NRA) showed great thought and foresight into what would be necessary for Nepal to swiftly recover from the quake. Empowering the NRA with special procurement and hiring authorities and to coordinate efforts across ministries was a wise measure. And, since the establishment of the NRA more than a year ago, the authority has instituted a sound framework of policies and procedures that, once fully implemented, should allow for rapid acceleration of reconstruction. And, while we all wish recovery were something that could be accomplished more quickly for the sake of those still without permanent shelter and community facilities, Nepal’s housing reconstruction program is progressing at about the same pace as other, similar programs around the world. While frustrating, the first 18 months of these programs are typically dedicated to setting standards, making difficult decisions, and deploying technical assistance to ensure that once construction commences, it is swift and, critically, results in safer communities.

As we all know, though, tremendous work lies ahead. It is essential that sound reconstruction policies and plans are fully implemented. It is vital that the NRA remains fully empowered to utilize its special authorities and that the institution and its leaders remain apolitical. Central and local government authorities, civil society, and Nepali citizens—all of whom have a stake in this—need to do everything in their power to ensure that the NRA is successful in swiftly and effectively rebuilding after the 2015 earthquakes.Nepal should use the experience from this empowered body to discover what characteristics are essential for a permanent disaster management body.

Use these lessons to improve the legal and policy environment to support more efficient and effective response and recovery efforts in the future. In this regard, I urge lawmakers and civil servants to consider carefully just how to develop improved disaster management architecture.  Passing poorly conceived laws on disaster management could be just that… a disaster. It is important to get laws on the books that address the full disaster management cycle, consolidate disaster management responsibilities, establish nimble empowered institutions, and incorporate lessons from the 2015 quake.

A central component of the 70 years of US-Nepal relations has been our partnership in reducing and mitigating disaster risk and in standing with Nepal to support response and recovery efforts. We supported Nepal’s early efforts that helped define disaster risk reduction for the world and we will stand by Nepal—with assistance, expertise, and in spirit—in envisioning and creating more robust disaster management systems and institutions that can set new global standards in the future. When the 20th Earthquake Safety Day rolls around next year, I think we’d all like to see a Nepal better prepared—at a strategic level—for the next disaster in the same way we hope families and communities take earthquake safety to heart.

BIRATNAGAR, March 12: A local Bishnumaya Library here has collected Rs 12.5 million in donation in order to materialize its... Read More...

SOLUKHUMBU, Jan 1: The plan for building a birth center at Deusa VDC of Solukhumbu has hit a snag with... Read More...