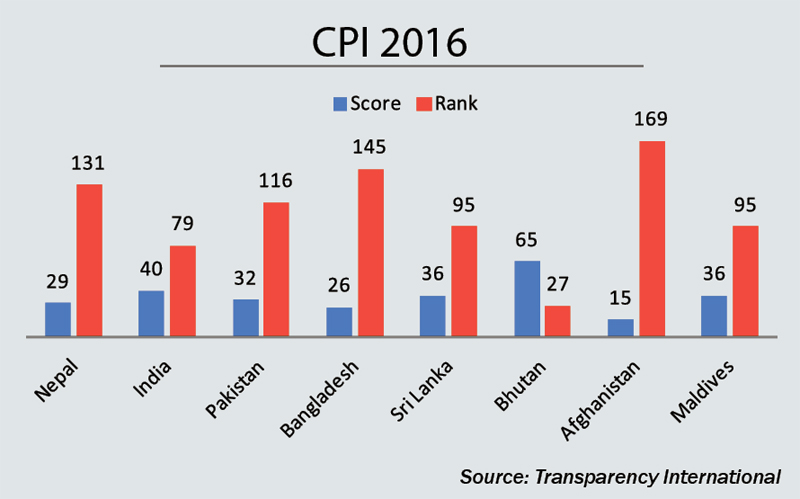 Ask yourself: Can I receive government services without paying a bribe? Do I need to have a close connection to a political party or “big man” to get a timely approval for a standard business practice? Can I even get a job or send my child to school without paying into some network or cartel? Will newly elected local officials really deliver on promises of development and services or simply seek to repay the party’s aphno maanchhe (“Own Guy”)?

Every day I read stories in the Nepali press about the latest corruption scandal. It is encouraging to see the media focusing increased attention on corruption and parliamentary committees conducting more investigations into questionable practices and transactions. While we must certainly retain the presumption of innocence and await the findings of credible investigations before casting aspersions of guilt, it is staggering to me how the average Nepali’s response to these allegations is one of a lamenting shrug and assertion that “that’s just how things are done in Nepal.”

The array of allegations of corruption, the minimal accountability those involved face, and the public fatigue make it clear that—regardless of the merits of any of the individual recent cases—corruption has permeated all levels of the public and private sector in Nepal. As Nepal embraces democracy through a hard-won constitution and long overdue elections, I wonder whether endemic corruption will deprive the country of yet another decade of potential growth. I certainly hope it will not.

Corruption can corrode and undermine a democracy and suffocate economic growth. At its core, it is the misuse of power for private gain. It misdirects money that could be used to feed children, supply schools, or build infrastructure; it facilitates economic inequality and fuels organized crime; and—if it persists—corruption can contribute to national and regional insecurity and destabilization.

Citizen role
For the past five years, Transparency International’s Corruption Perceptions Index shows that Nepal has been seen to be between the 116th and 139th most corrupt country in the world. In 2013, 85 percent of Nepalis who responded to the Global Corruption Barometer’s public perception survey saw corruption as a problem, while 72 percent said it was on the rise. Only 13 percent thought the government’s actions to fight corruption had been effective. The data suggest that the Nepali public perceives the top three most corrupt institutions in Nepal to be political parties, the police, and the civil service.

According to data from Nepal’s Office of the Auditor General, in fiscal year 2014/15 total irregularities stood at Rs 48 billion (5 percent of Nepal’s annual budget). At best, Nepal has a huge image problem in that it is widely viewed as being riddled with corruption. At worst, Nepal has a huge corruption problem—readers know from their own experience where exactly Nepal rests on this spectrum. Regardless of where that point is, Nepal and Nepalis will suffer for it. And it doesn’t have to be this way.

Nepal has now completed local elections across the country and is on the brink of provincial and parliamentary elections. As the political transition and upheaval that began two decades ago gives way to a new, constitutionally-enshrined federal system, Nepali leaders have a chance to say that “I will not permit corruption on my watch, ma khandina!”

In the complex process of implementing the new federal system and fiscal decentralization, I and many others worry that only a few watchdogs are closely monitoring the flows of state funding. Post-elections, there lurks the very real possibility that some individuals and parties will attempt to recover campaign expenses and repay favors. Therefore, it is up to Nepali citizens and civil society to become civic watchdogs and ensure these practices do not go unchecked.  It’s time to stop accepting corruption as the norm. No more saying yastai ho, ke garne?

Hard, not impossible
Countering corruption and preventing further entrenchment is not easy; however, it is important to understand how huge the costs of corruption are, especially for a developing country like Nepal. A recent estimate put the global annual cost of bribery alone at US $1.5 to $2 trillion (roughly 2 percent of global GDP). The overall economic and social costs of corruption are likely to be even larger, since bribes constitute only one aspect of the possible forms of corruption, not including costs and inefficiencies from issues such as nepotism, cartels, or patronage.  Attacking endemic corruption is necessarily a political undertaking—it requires political will, modeling appropriate conduct, transparency, effective oversight, and consistent accountability.  As I wrote just a few months ago, democracy is and ought to be messy, but it should also be fair.
The United States has itself struggled with corruption, and our system of checks and balances is designed to enhance transparency and reduce the ability of individuals to personally benefit through biased application of public duties. However, at times this has been a daunting challenge. In the 1860s and 70s, “political machines” dominated elected positions and extracted exorbitant amounts of money from rapidly growing cities. Patronage and clientelism were the norm, and our nation’s poor and marginalized suffered disproportionately. It was our independent civil society and news media that ultimately stepped in to serve as de facto oversight bodies to expose the entrenched corruption. Our judiciary then stepped in to enforce the law.

For the United States, this marked the beginning of public demand for—and government response to—merit-based civil service reform, which ushered out the spoils system that filled government posts through patronage, among other reforms. Our challenges with corruption continue, but we are committed to strong oversight mechanisms to identify and prosecute cases that emerge.

Preserving democratic gains
Countless studies suggest that the single most effective ingredient for ensuring the success of transparency and anti-corruption initiatives is the joining of hands between a nation’s government and its civil society. The Open Government Partnership (OGP) was launched in 2011 to provide an international platform for exactly that. It does so by bringing together reformers committed to making their governments more open, accountable, and responsive to citizens. Since its inception, OGP has grown from 8 to 75 participating governments, representing one-third of the earth’s population. In each of these countries, government and civil society are working together to develop and implement ambitious open government reforms. As a proud member of the OGP, the United States has established and is implementing our own Open Government National Action Plan.

Nepal—which ratified the United Nations Convention against Corruption the same year OGP was launched—is eligible to join OGP. And elements of the Nepali government and civil society are already taking important actions against corruption. In 2017—a year in which Nepal has made significant strides toward cementing its constitution and democracy through elections—the country has an opportunity to enshrine its commitments and set a more transparent and corruption-free stage on which to meet the demands of the future. The Global Corruption Barometer tells us that 86 percent of Nepalis believe they have the power to stop corruption.  While the fight against endemic corruption is multifaceted, Nepal’s government can take an important step toward changing the status quo by endorsing the Open Government Declaration and joining OGP.

The author is US ambassador to Nepal

“When citizens leave their home countries for better opportunities, the government fails the country. Likewise, citizens fail when the experience... Read More...

Dengue infection is a systemic and dynamic disease and has a wide clinical spectrum that includes both severe and non-severe... Read More...

1,051 people infected with dengue in a single day
34 minutes ago