Services in Lamahi Hospital affected in lack of staff 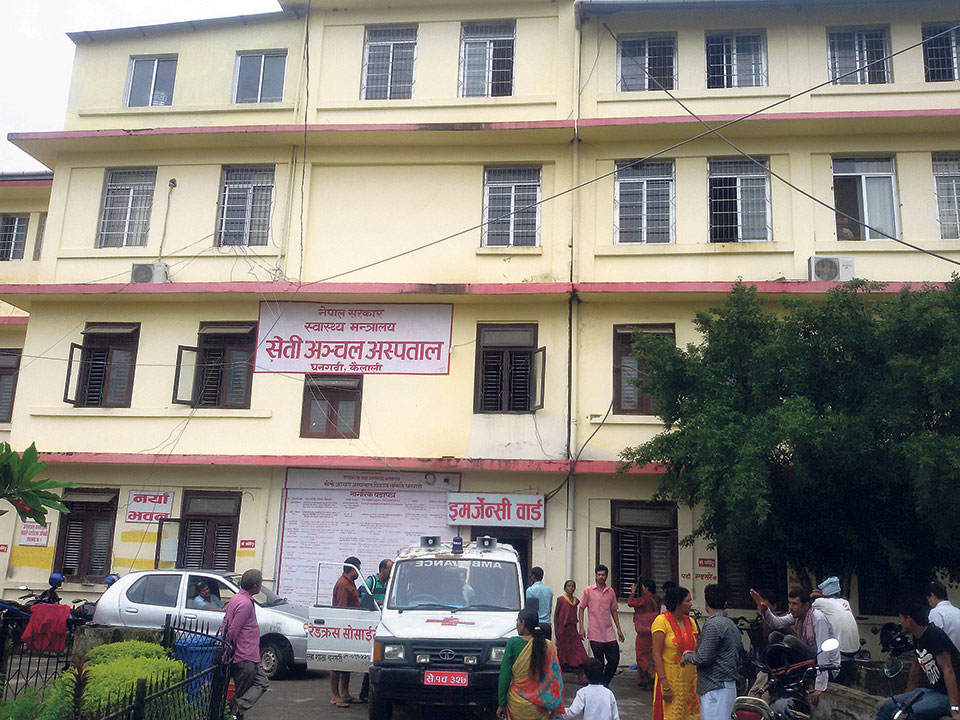 DANG, Aug 2: Lamahi Hospital, which is visited by dozens of patients from towns and rural villages of Dang, has stopped providing x-ray, ambulance and several other kinds of health services in lack of staffs. The hospital became unable to provide such services after nine of its staff members’ employment contract was not renewed by its development committee. The institution was already struggling with the shortage of doctors and nurses.

“Our services have come to a halt and this has affected many patients who visit this hospital seeking medical treatment,” said medical superintendent of the hospital, Dr Bimalesh Gupta. “As the hospital’s development committee denied extending their contractors, nine staff members were forced to quit their services since Shrawan first,” he added.

Contracts of three assistant health workers, one x-ray operators, three peons, an ambulance driver and a mortuary van driver were not renewed. This has brought all services provided these staff members to a halt. Apart from these officials, the hospital is presently providing treatment with the help of a single doctor. One of the two doctors is presently on education leave. Shortage of the doctor has affected the hospital’s ability to provide 24-hours emergency services.

Gupta slammed the development committee and accused them of gross negligence. He asserted that the committee should have been more professional and extended the contract of the officials on time.

Chairperson of the committee, Chetram Chaudhary apologized for the inconvenience caused to service seekers while defending the committee’s action. “Our decision has greatly affected the services provided by the hospital. We feel very sorry for that we could not avert such crisis,” he said.

He however defended that the committee’s decision of not renewing the staff member’s contract. Chaudhary claimed that the contract was not extended due to rifts between the hospital administration and development committee.

“The administration is blaming us for the crunch of employees. However, we are not responsible for it. There was a serious dispute going on between the staffs and the administration. We tried to smoothen the relationship but it did not work out,” he said.

“We had asked the administration to provide work reports of the officials whose contract was to be renewed. Despite repeated requests for the same, the administration did not oblige with the request and we were forced to not renew the contracts,” Chaudhary said.

Elaborating further on the uncertainties the hospital is facing, Gupta informed that that operating the hospital in absence of a development committee would be another challenge. “It is 15-bed hospital that provides services to many people. It is very unfair that it is running so poorly,” he added.

JANAKPUR, July 25:A major hospital in Janakpur, where patients from surrounding eight tarai districts come for treatment is running without... Read More...