Semi-final a possibility for Nepal in Youth Asia Cup 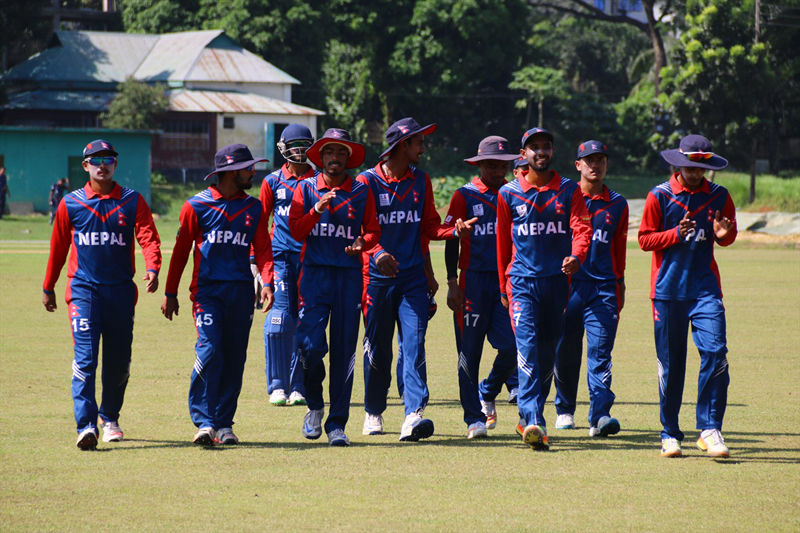 Prelude
Nepal’s only completed batting innings at ICC U-19 Asia World Cup Qualifiers was 49 all out versus Afghanistan in a decider which sealed progression for the later team to next year’s junior world cup. A year ago, Nepal also lost to Namibia by 15 runs chasing 225 in 2016 for the 7th place play-off match failing to make a direct entry into the U-19 world cup. Fast-forwarding to the current time, Nepal again lost first two games of the Bangladesh tour before winning the last one in an emphatic way.

From being 49 all out to 90 runs by a single opening batsman, Nepal has, and finally, come a long way heading into the second biggest U-19 tournament in the world. Youth Asia Cup is set to test Nepal’s progress from that shambolic performance in Asian qualifiers, earlier this year.

Bowling will forever remain the strength for Nepal, batting will be tested. Given the fact that Aasif was complemented by newcomer Jitendra Singh and other batsmen also chipping in with promising cameos in the last match against Bangladesh will help the team to get that much needed positive frame of mind before a tough tournament.

Group
Nepal ran Sri Lanka close in December 2016 when another exemplary inning by Dipendra Singh Airee lead the chase only to falter at the end. The memories should be fresh going into a group that includes heavyweight India, Bangladesh and more regular nemesis in host country Malaysia in the Group A. Nepal has won against Bangladesh and crushed Malaysia in their last encounters which should build confidence heading into those matches. However, India, the tournament favorites remains the Mount Everest to climb despite missing two of the most promising teenage batsmen in Subham Gill and Prithvi Shaw to Ranji commitments.

Strengths
Bowling remains Nepal’s strong suit. Sandeep Lamichhane is taking wickets for fun. However, against India and Bangladesh, two sub-continental teams known for playing spin better, will be a test of his development in must-win matches. Against Malaysia, he has taken total 12 wickets in last two matches.

Similarly, Anil Sah and Rohit Paudel have been developed into handy seamers to contemplate the third spinner Pawan Sarraf in the playing XI. Dipendra Singh Airee remains a dependable bowling option if the situation demands.

Aasif Sheikh’s aggressive batting complemented by Jitendra Singh’s passive approach worked well for Nepal in the third practice match. The confidence and rhythm they gained will need to be transformed into the Asia Cup matches.

Head coach Binod Das emphasized on top 4 heavy batting performances which include, Aasif, Jitendra, Anil Sah and senior team member and captain of U-19 team Dipendra Singh Airee. It seems fair given their performances in last year or so. Either one of them has to play a long innings to hold the innings together.

Weaknesses
Nepal’s U-19 batting has seen some sorts of pummeling in recent times. Performance against Afghanistan in Asia qualifiers, struggling to chase paltry totals against Singapore and Malaysia, and against Bangladesh in second practice match are few examples how poor Nepal has been since the heydays of U-19 world cup last year.

The individual performances of Dipendra Singh Airee and Aasif Sheikh gave us two memorable matches against the test teams. Meanwhile, Anil Kumar Sah, Pranit Thapa Magar, Jitendra Singh, etc have shown glimpses of brilliance which is yet to transform into noticeable innings.

Pawan Sarraf has lost in translation somewhere in recent times. Same can be said for Rohit Kumar Poudel. Both are highly rated by the management enrolled to bowl and bat whenever required but has been used only for plugging holes. Termed as allrounders, they have not made any significant contribution in the playing XI.

Probables
Aasif Sheikh, Dipendra Singh Airee, Sandeep Lamcihhane, Shahab Alam are certain to make the playing XI whilst other can shuffle with each other, especially, in playing order. Pranit was touted as one of the most exciting batsmen but faded away in recent times. Rohit started as opening bowling partner finds himself in middle of the batting order. Prakash KC made a comeback after missing out on ACC Eastern Region Qualifiers is likely to don the wicketkeeping gloves. Bowling is more settled with both Kishore Mahato and Rashid Khan set to miss out.

Prediction
India is as tough as opposition one can get at this level with their prowess in this format. Nepal always had a good winning record against Malaysia. The momentum is with Nepal after defeating Bangladesh. If they can repeat the same feat, the semi-final is a possibility. However, Bangladesh will be more than ready to make things even after the shock result. A more realistic chance for Nepal is to finish 3rd in the group given their batting woes.