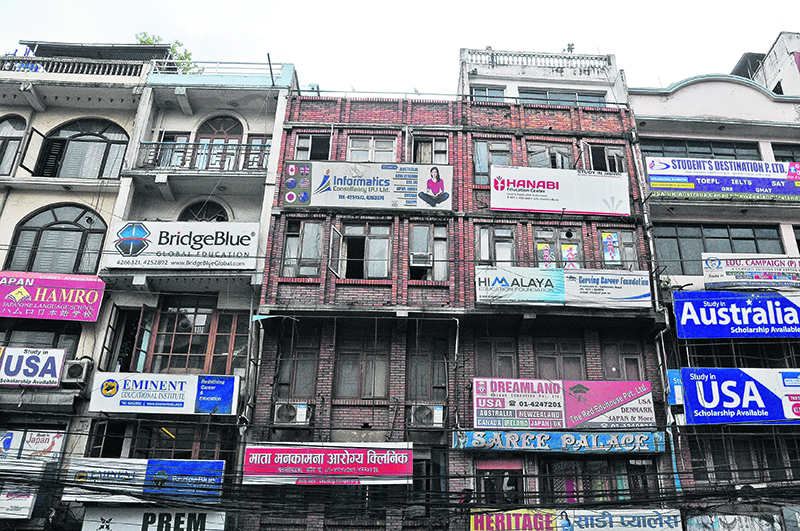 Safal Niraula, caught up in stories spun by a consultancy and college recruiters, applied to Southern Illinois University, where he will attend this fall. Instead of excitement though, when he realized the school wasn’t as it was marketed to be, he felt cheated. “I feel like a victim,” he said.
“Students just want to go to the US and so they do what the consultancies say,” explained
Niraula, who used Sagit consultancy to try to gain admission to a US university—which for many Nepali students represents the path to a better future.

But the process wasn’t easy as promised, and the fees continued to mount. When he got his I-20, the equivalent of an admissions letter for international students, he had spent 15,000 rupees—no small sum in a country with an average income of US $862.

Consultancies provide a range of services: filling out forms, supplying pre-written essays and letters of recommendation, visa interview preparation, and even bank statements which many institutions require of international students as proof that the students can pay, as many schools don’t offer financial aid to foreign students.

Sanjay Adhikari, for example, who applied to Stratford University, through CB Consultancy, was told he would need to show that he had between US $30,000 – 36,000 in his bank account.
When Adhikari told the consultancy he didn’t have that much money, the owner of the consultancy offered to fabricate a bank statement. For Rs 4,000, a statement was procured that was sent to the university on Adhikari’s behalf. His application for an F-1 visa was rejected.

The business model of consultancies rests on agreements between them and the colleges. For each student the consultancy sends the college, the college will pay a commission that consists of some percentage of the student’s first year tuition, often five to 20 percent.

“We have certain universities that we provide [as options to students] and they have to choose between them,” explained Bijan Shrestha, founder of the consultancy USA Broadways. The consultancy earns five to 10 percent of the student’s tuition in the first year, in addition to fees from students. This payment structure, which often students are unaware of, means that consultancies may be steering students to schools that are not a good fit.

Pradeep Rawal, a student who had volunteered at the consultancy Kavya Global Network, said, “The consultancy would send excellent students to the College of San Mateo, a community college, because San Mateo would pay the consultancy US $5,000 per student.” Community colleges only award two-year associates degrees, as opposed to four-year bachelor degrees and often have lower academic standards for admissions.

Rajendra Raj, vice-president of the Education Consultancy Association of Nepal (ECAN) an organization that represents 300 consultancies across Nepal, defended this model and said that their members never push students to apply to schools they have agreements with. ECAN has placed a cap of Rs 25,000 that can be charged to students if the consultancy is also earning a commission from the college.

Signs emblazoned “I-20 guaranteed” and “Easy Visa” along with Facebook advertisements draw students into consultancies that have stayed relevant because of a lack of reliable information about US schools—a status quo some consultancies even work to perpetuate.

According to Nishchal Upadhyay, who is starting at the University of Texas at Tyler this fall, some consultancies “spread the myth that if you apply on your own you may not get admission to universities.” Consultancies do this to trap students into using their services.

Acquiring an F-1 visa from the US government represents the final hurdle students face. Before granting student visas, consular officials take into account three things: that students intend to study, will return to Nepal, and can pay for their education. For students who have used consultancies and know little about the school they have been applied to, and could have gotten their I-20 using fabricated documents, obtaining a visa can be impossible.

The stories of students who use consultancies run a similar course. A combination of high-pressure sales tactics, repeated assurances, and a lack of knowledge means consultancies can exact substantial fees from students.

“Students want to go to school in the US,” said Rawal, who used Desire Education Consultancy to apply to West Virginia University, where he was accepted. “The counselor influenced me to apply through the consultancy,” he said. He was charged Rs 100,000. His application for an F-1 visa was rejected.

Some of the US colleges that consultancies partner with often have checkered track records. This was the experience of one student who spoke on condition of anonymity after, according to the student, EDU consultancy, the consultancy she used, threatened her and her father.

This happened when the student and her father went to complain after the consultancy had her apply to a school operating on a provisional waiver. When this happened a consultancy employee told them, “I can do anything to you, you’re here in my office” and to “not to tell the media.”

The consultancy made her apply to Lincoln University in the spring of 2017, charging Rs 25,000. Unbeknownst to her, in December of 2016, the US Department of Education had withdrawn recognition of the Accrediting Council of Independent Schools, the agency that had accredited Lincoln University. Lincoln had been operating on provisional accreditation since then.
EDU Consultancy has continued to send students to Lincoln, a practice the director, Devi Bhattarai, defended explaining he had received assurances that Lincoln was in the process of pursuing new accreditation.

ECAN estimates that there are 2,500 consultancies in Nepal. As of January 2017, that Ministry of Education (MoE) had granted permission to 900 consultancies to operate, with another 1,593 applications pending.

For years, this sector—handling substantial sums of foreign currency not to mention thousands of students—has operated with little oversight. Its size reflects, in part, government inaction.
There are signs this might be changing. In 2015, 50 Nepali students were stranded in St. Lucia after being guaranteed passage onward to the US. A crackdown followed with the Metropolitan Crime Division raiding three-dozen consultancies.

Oversight was handed from Office of Company Registrar to the MoE, which it was felt could better regulate industry. In 2016, the International Relations and Labor Committee directed the MoE to draft new laws for consultancies and included in the 8th Amendment of the Education was a provision requiring consultancies to register with the MoE. To date, no new regulations have been released and no drafts have been made available. Surya Prasad Gautam, Division Chief of the Counseling and Verification Section of the Ministry of Education, declined requests for comment.

These government efforts, however, seem to fall short for many students as they have been slow to be released and fail to address the fundamental flaw: Consultancies are paid to push students that might not be a fit for them and has allowed a practice banned in the US to flourish abroad.
Students are beginning to pushback as well. After getting his visa, Timalsina started the Facebook group, United States Visa for Nepali students (USVNS) that created a community of interested in students who could be recourses to one another. Membership in the group has swelled to 93,475.
The US government is also taking action. In June of 2017, US Ambassador to Nepal, Alaina B. Teplitz, published an op-ed in República clarifying the application and visa process. Teplitz addressed “visa consultancies” head on.

“Don’t use them,” she wrote, “visa consultancies exist to make money at your expense.”

BIRATNAGAR, Dec 13:  Police have arrested a man on the charge of selling electricity pilfered through a transmission pole to... Read More...