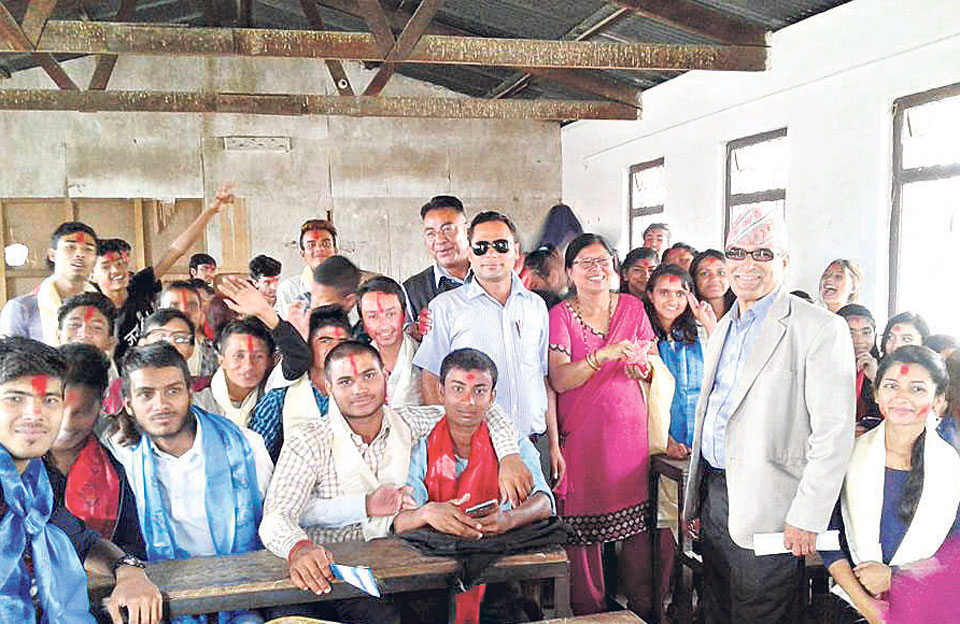 On June 16, the Office of the Controller of Examinations (OCE) published the results of the first Secondary Education Examination (SEE), previously known as the School Leaving Certificate (SLC) exams. Since then, SEE graduates have been wandering around in groups in order to check out colleges. After the publication of the results, colleges, especially those in the cities, have been flocked with students who have come from different corners of the country to find a college that is good enough for them.

The presence of too many colleges has left the students confused while some young minds are still indecisive of what to study. Choosing an appropriate subject and suitable college has been quite challenging for them. Teenagers, who in the past did everything as directed by their parents, have finally realized that they have grown up. This probably is the first time when young students are compelled to make a serious decision in their lives that will play a vital role in shaping their careers.

Even after taking career counseling classes, listening to the advices of parents, teachers and experts, only a few of them have been able to make up their minds while many are still in a huge dilemma. Normally, students pass SEE at 16 or 17 which is a tender age. There are enough colleges in Nepal which offer a variety of courses. But more choices have further confused the students.

Shibani Thapa, 16, who recently passed her SEE with A grade, was already prepared about what to study after crossing the Iron Gate. She says she always wanted to become a doctor. So, she had already made up her mind to take science as her major subject ever since she was in Grade eight. But when it comes to choosing the college, she seems a bit confused. She said that she wants to get admitted to either St. Xavier’s College or Prasadi Academy. “So, I have decided to appear for the entrance exams of both the colleges,” said Shibani.

Similarly, Binita Karki of Nakhipot who passed SEE with C grades has visited around 16 colleges of Kathmandu by now but has yet not been able to choose the right’ college. “I want to study Management in plus two but the highly-reputed colleges are not ready to enroll me as I don’t have sufficient grades,” said Karki, adding “Yes, there are other colleges as well but I am not satisfied with their facilities, services and results and now I’m totally confused what to do.”

Namgyal Lama, who was seen outside White House College on Tuesday, has chosen Science as his subject. “My elder sister also completed her Plus Two from this college. So, she and many of my teachers have recommended this college to me,” said Lama.  According to him, White House meets all the requirements to be his dream college.  He also said that a lot of his friends are busy checking out colleges. “It is very much important for us to understand the significance, facilities and opportunities provided by colleges, making sure that we won’t have to regret it later. So, it is wise to take advice from the passed out students and elders,” Lama added.

Anuj Khatiwada who recently came to Kathmandu from Bhojpur along with his parents looking for a college for his higher studies wanted to study science. So, he made a list of some reputed colleges of Kathmandu which had a good reputation. But after checking out around 13 colleges, he seemed really disappointed especially with the fee structures. According to him, most of the well-known colleges are not affordable for students from average income families. “It is so unfair that there are rarely few government institutions for plus two due to which students are obliged to pay high fees,” he said.

It has been around two years since Nepal government introduced the grading system which has become a trouble for some students. As per the grading system, students are compelled to choose subjects on the basis of their grades. This has ultimately forbidden some from choosing the subject of their choice.

Following in the footsteps of his brother, 17-year old Nishes KC of Samakhushi had dreamed of becoming an engineer but his dream was shattered as soon as he saw his SEE results. He passed SEE with C grades and no reputed college is ready to enroll him in the Science faculty. There are some colleges which are ready to consider his grades and allow him to take the subject of his dream but KC is not impressed with various aspects of those colleges. “No matter whichever subject I chose, I am not ready to compromise with the quality of education,” KC Said. This has obliged him to change his subject but he is not sure as to what to study. He is also worried that his decision might lead him to a career where he will have to live with frustrations and tensions.

In our society, students with higher grades are under pressure to study Science. Parents keep on pressurizing their kids to take science if they score higher grades without confirming what their kids want. Students are obliged to choose the subject of their parents’ choice because at the end of the day it’s their parents who are going to pay their school bills. However, it is not fair to say that the subjects chosen by the parents are always not suitable for their children. There are some students who get admitted to particular colleges just because their friends are enrolled there. But it is very important for the students to be sensible and tactful while deciding what they want to study after SEE. They must not forget to take suggestions and advices from their elders but they should not pick a certain course just because their parents want them to pick that course.

Too many SLC graduates for schools, CTEVT to absorb