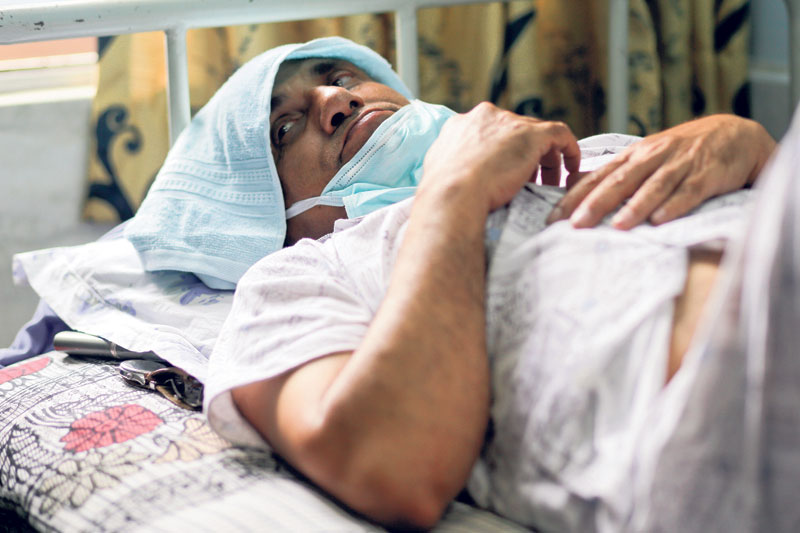 KATHMANDU, July 29: The second phase of talks between the government side and Dr Govinda KC's side ended inconclusively on Saturday.

Senior orthopedic surgeon at the TU Teaching Hospital, Prof Dr Govinda K.C. is on a fast-onto-death, demanding overall reforms in the medical sector and the fulfillment of the agreement that the government signed with him in the past.

The second round talks held at the Ministry of Education today failed as both sides could not concur on the Medical Education Bill that is under consideration in parliament.

Coordinator of the Government Talks Team, Education Secretary Shanta Bahadur Shrestha said that since reforms in the medical education is the primary demand of Dr. K.C., initiatives are underway to facilitate on this matter at the level of the Prime Minister, the Education Minister and the Health Minister, as the demand cannot be addressed at their level alone.

"The bill is in discussion in the parliament and the topics that have to be incorporated and amended in it need to be addressed through the political level also. Therefore, initiatives are being made to have the bill passed by the parliament and ending the situation of hunger strike," he said.
Dr. Abhisek Raj Singh, a member of Dr. K.C.'s talks team, said that the talks could not make a headway after the government side stated that the main agenda of the talks was beyond their jurisdiction.

"Today's talks could not enter the main agenda as the government talks team said that they could not meet all the stakeholders – the Education Minister, the Health Minister and the parliamentary whips of the three main political parties today before holding the talks, as had been agreed in the first round of talks on Friday," Dr. Singh explained.

Meanwhile, a rally has been organized at the Maitighar Mandala today, expressing solidarity to Dr. K.C.'s demand. The Bibeksheel Sajha Party, doctors, employees, civic society representatives and members of the general public took part in the rally.

This is Dr. K.C.'s 11th fast-onto-death, demanding an end to aberrations and anomalies prevailing in the medical sector of the country.

His major demand for this time protest figures the earliest endorsement of Medical Education Act from the parliament. RSS

Public Rally on Saturday in support of Dr Govinda KC

KATHMANDU, Oct 13: A public awareness rally in support of Dr Govinda KC has been scheduled to be organized on Saturday,... Read More...

KATHMANDU, Nov 26: Dr Govinda KC has warned of not sitting for talks with the government unless it apologizes. ... Read More...