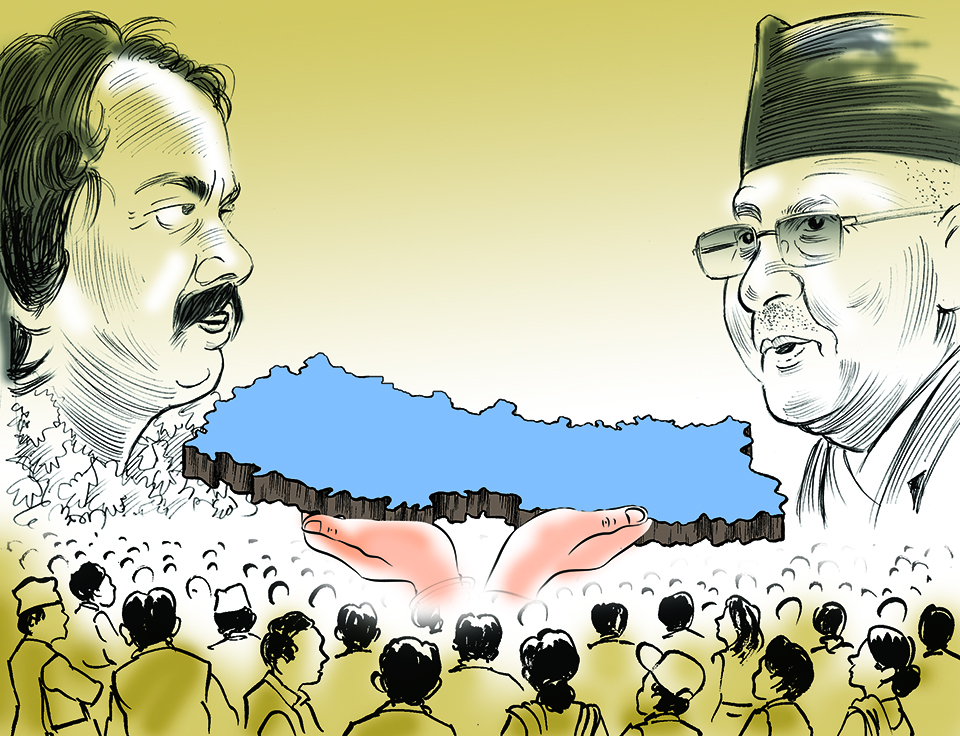 There are two differing views on the agreement the government of K P Sharma Oli signed with CK Raut on March 8. One is that the government made a mistake by striking a deal with the secessionist, without having him publicly apologize for the activities he carried out in the past and without him publicly committing that he won’t resort to it ever again. Though it failed on selection of right words in the agreement the government made the right move by mainstreaming the secessionist group, goes the second line of argument. I argue that despite faulting on some words, the deal has done us good and we must not worry too much about it.

The words used in the agreement may be interpreted to mean what you like. CK Raut—about whom the whole deal is—did the same. Soon after inking the agreement, he went on to advertise it as victory of ‘Madhes’ over Nepal and propagated it as the government conceding to referendum to settle the ‘free Madhes’ issue. Then all hell broke loose.

The last one week has seen contestations of various kinds. Questions have been raised in the party, across the parties, inside the government, in the parliament and by the people. None other than Bhim Rawal, a key leader of ruling Nepal Communist Party, has called it an extremely dangerous deal. He is furious that the government conceded to treasonous demand and that the agreement could legitimize secession as a political agenda. Leaders from Sher Bahadur Deuba to Gagan Thapa to Dhana Raj Gurung to Kamal Thapa to Narayan Kaji Shrestha to those from Rastriya Janata Party Nepal (RJPN) have spoken against the deal. Their arguments:  The government was deceived into sealing this dangerous deal. It will not end secession threat. CK Raut duped Oli.  Raut is only a proxy and the real secessionists are ‘unseen foreign powers.’ Now that the government has documented secession they fill find space to fuel it in the days to come. So on and so forth.

These interpretations have pushed the government into defensive mode. There will be no referendum on matters related to territorial integrity, national independence and sovereignty of Nepal, the prime minister thundered the other day responding to the questions raised by the parliamentarians. The agreement does not contain any word or a spirit of referendum. CK Raut has to abide by the spirit of the deal and if he does not, things will return to status quo ante, Home Minister warned in a roundabout way. It’s been a week of fire and fury in Kathmandu.

Perhaps because some of the words were left deliberately ambiguous, there have been differing criticisms. Point two of the agreement says ‘we are firm toward moving forward in peaceful manner and through democratic means to achieve our political, social and economic goals.’ No contention here. But the next sentence reads ‘we have agreed, by using the sovereign rights of people granted by the constitution, to solve dissatisfactions in Tarai Madhes and other places through democratic process based on Janaabhimat.’ The government ministers have rightly interpreted it to mean public opinion, people’s mandate and regular election. But opposition and the critics do not see it that way. They say that the word here has been used to mean referendum and nothing less. It is disingenuous to stretch the meaning that far. We must not interpret janaabhimat as referendum. It is regular election and people’s mandate. Nothing more.

CK Raut may keep interpreting this word to his liking. But the first point of the agreement, which undercuts other points that follow, has been written so wisely. “Federal Democratic Republic Nepal is an independent, indivisible, sovereign nation. It is the duty of every Nepali to safeguard Nepal’s freedom, sovereignty and territorial integrity,” it says. These are the words from our constitution. That Raut has signed under this declaration means it is also his duty to safeguard “territorial integrity”. It is this point which will bind Raut to integrity of Nepal.

Raut himself must be watching how his misinterpretation turned the whole country against him. Hopefully, he will refrain from repeating that mistake.

Interpretation and misinterpretation of ambiguous words might continue for sometimes. The debate on the deal might be deliberately derailed to mean referendum and it could be pretty much abused too. We have the bitter precedent of best of the moves being derided and vices justified. But despite all that has happened and might possibly happen because of the deal, I am still excited about the developments that followed this week.

For every country around the globe, secession is a treason, a national crime and the agenda that every political party and individuals should avoid. Everywhere else in the world the government tames or prosecutes the secessionists.

But in Nepal secession was used to raise specter of doom and as a bargaining chip. One of the rallying cries of Madhesi leaders in post-2008 politics was: If Kathmandu does not do what we say, what will happen when entire 22 districts of Madhes stop following Kathmandu’s orders? Sarat Singh Bhandari earned opprobrium for saying this in 2012. During the blockade and mayhem in Madhes in 2015 other Madhesi leaders resorted to this scary tactic. They said the same thing during the deliberation on provincial boundaries. They raised CK Raut bogey to pressure big parties to capitulate. ‘If leaders in Kathmandu do not heed us, things will go out of our hands into CK Raut’s,’ Madhesi leaders have said this on the record, including with this scribe several times. This had to come to an end.

Granted that Prime Minister Oli was tricked, that he took this move without thinking much about its repercussions (I personally think Prime Minister cannot have taken such a big move without proper calculations and I give him the benefit of doubt until he proves himself wrong). Granted that CK Raut and his supporters will revive secession agenda by citing the loopholes of this agreement. Granted that some political parties will try to capitalize on it.  But people are not going to stay silent.

Look at the outrage coming from Madhesi leaders (including those from Province 2) and the public. Rajendra Mahato has said if the government agrees on referendum that will be the most treasonous act and that there can be no referendum on Nepal’s integrity. Look at the uproar across the board from the hills to the plains, from hill leaders to Madhesi leaders and the general public. It means quite a lot. The message here is pretty loud and clear: Nepalis are ready to bear with any adversity but they cannot bear witnessing leaders talking about referendum over matters related with Nepal’s integrity. If Nepalis respond to unstated referendum with such rage, imagine what they will do if the government actually decides to go for referendum to split the country. In a way, the deal between the government and Raut came as a referendum on referendum on secession and the entire country stood against it. They have killed the secessionist agenda.

The overwhelming rage against unstated referendum in the deal between CK Raut and the government is the strongest evidence of how whole of Nepal stands against secession. Nepalis, however, will have to keep vigil against elements which speak against sovereignty and territorial integrity of Nepal.

If CK Raut reneges, the government will have to declare the agreement null and void and deal with him and his outfit as the state deals with secessionists. What if the ‘unseen foreign forces’ silently instigate? What if the political parties who are speaking against the perceived dangers now stay silent at such time? We will have to rise. We will have to speak up.

A country may not mean much for all those proxies who have made talking ill of Nepal a source of their living, who pride in reviling the country in every possible way in every possible opportunity. It is us, who have to live here, and those who are sustaining our economy with blood and sweat from various parts of the world, whose better future lies in better future of the country, who have to stand united. This past one week, I have been pretty much excited by how passionately Nepalis, home and abroad, care about Nepal. Fellow Nepalis, the country will be safe as long as we maintain the spirit we demonstrated past one week.

No matter how much we glorify role of ICT in improving education, it cannot happen without larger participation of teachers Read More...

When necessary, NOC must leverage its strategic collaboration with Indian Oil Corporation to ensure that technological advancements are made for... Read More...

Soils under Threat
3 hours ago