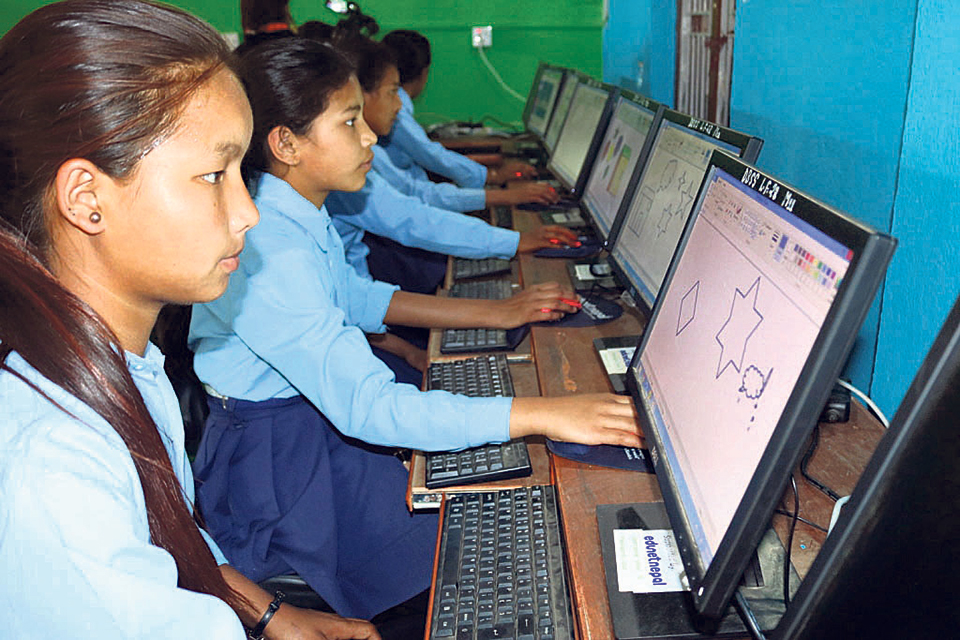 DHADING, Aug 28: This school can be largely called as a school for Chepang kids. Dolbhanjyang Secondary School in southern Dhading, which now boasts of modern facilities, has over sixty percent of Chepang children as its students. According to the school administration, it is quite remarkable that the school is empowering children of an endangered and backward community.

“We have installed CCTV cameras in the school and we monitor everything through it. We make sure that the classes run without obstruction and the teachers are helpful to the children,” said Pramod Rupakheti, chairperson of the school management committee.

“Similarly, there are enough computers for the kids. We have introduced several vocational courses as well so that the children won’t have dearth of job when they graduate,” he added.

There are 16 CCTV cameras installed in the school. Strict monitoring of this ensures discipline among teachers and students. The school has aimed to go digital as far as possible and students are getting computer training as well as training on internet use.

“Apart from enhancing quality of education, the CCTV cameras have helped bring down violence in the school. The teachers can no longer impose corporal punishment on the students now while the kids also have stopped fighting among each other. This has brought down the cases of injuries,” Rupakheti informed.

The school is three kilometers walk from the Prithivi Highway. Most of the students reach the school by walking all the way. The changes in the school however seems to have infused extra stamina among the students as they have stopped complaining of the tiredness.

“We feel so great at school nowadays. It is a great fun to be here. There are computers, library, and laboratory in our school. We also have several vocational classes,” said Sanjiv BK. “We love to be at school,” he added.

The school currently has 647 students. And all are from the marginalized community leaving a few exceptional cases. According to the school principal Bhuwan Thapa Magar, the maximum kids are from the Chepang community and a huge number includes Dalits.

“We are trying to give them the best education and facilities. We switched to English medium, recruited the best teachers and fixed modern techniques and facilities as per our limit,” Magar said, adding, “We stress on practical classes since traditional learning methods are not much relevant now.”

Magar stated that honing each child’s unique talent is also a huge consideration. As far as possible, the school wants to produce the best professionals, he said.

“Schools should not neglect the innate talents of a child. If a child is not good in studies, he or she might be better in singing, dancing or games. So, here, we are give space for such talents,” Magar asserted.

The school has started bee farming for generating income. This has been fetching some money, Magar informed.

“We cannot charge much fees to the students. If we do so, they won’t come as they are from very poor families,” he said. “Bee farming is giving us some money. We are trying to expand our business so that we can sustain our school,” he added.

The school aims to expand even in terms of its student capacity. Currently, a huge number of children in villages are out of school, and the school wants to ensure that everyone joins school.

“Most of the families are poor in this part of the district. Even when school does not charge fee, they cannot send their children to study. Many deprive children of education also due to lack of awareness,” states Magar. “We want to make sure that children, at least around the school, do not remain deprived of education. So, along with enhancing quality, we want to expand our capacity too,” he added.

Seeing the enthusiasm of the school team and the management committee, the District Education Office has provided support for some programs. Computers, CCTV cameras, library and other features were possible due to the support from the district office.

“It all came under the school reform program of the district education office. Seeing our performance, the officials have assured us of even better support in the coming days,” Magar said.

The DEO had provided the school with additional fund last year and asked the administration to make it the best learning place for kids.
According to BK, the best part of the school is the children’s club. This has given a new height to their identity, he notes.

“We have a club. After being associated with the club we have started to think differently. Being united and organized is a huge power. We can bring changes,” he said. “Our club is very active. We intervene in several issues of the children and adolescents. We feel empowered and responsible,” he added.

One killed, one injured in Dhading bus mishap

DHADING, Jan 13: One person killed and another was injured in a bus accident in Dhading on Sunday morning. ... Read More...

DHADING, May 23: A man died while two others sustained injuries in a truck accident at Benighat in Rorang rural... Read More...