SC to give verdict on IGP case on Tuesday 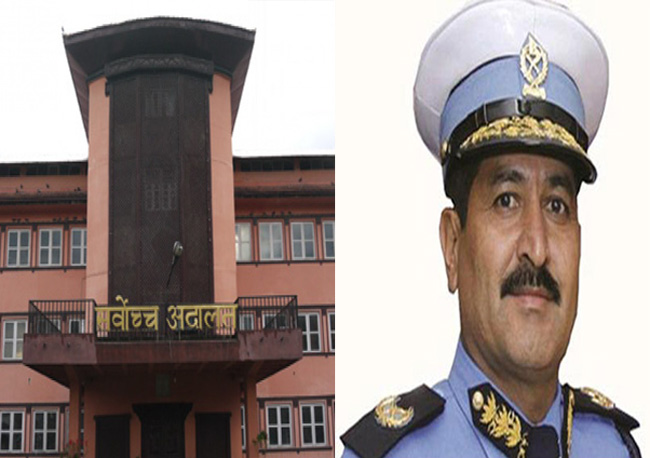 KATHMANDU, March 19: Supreme Court (SC) is set to give its verdict on the writ petitions related to Nepal Police IGP appointment row on Tuesday.

The hearings on the petitions concluded on Sunday at the full-bench in SC. Government Attorneys from defendants' side presented their arguments in front of full-bench of Chief Justice Sushila Karki and Justices Hari Krishna Karki, Ishwar Prasad Khatiwada, Aananda Mohan Bhattarai and Anil Kumar Sinha.

The lawyers from plaintiff side presented their arguments on the issue on Sunday while lawyers from the side of DIG Jaya Bahadur Chand did not attend hearings on Monday. Senior Advocates Sushil Panta and Prem Bahadur Khadka as well as Advocates Yadunath Khanal, Khamba Khati, Sunil Pokharel, Hari Upreti and Madhav Basnet were the lawyers from Chand's side.

The government had appointed DIG Jaya Bahadur Chand to the post of IGP on February 12. On the same day a single bench of Chief Justice Sushila Kariki had issued an interim order not to implement the government’s decision.

Advocate Kapil Dhakal had filed a writ petition at the SC against the government’s decision arguing that the appointment breaches the regulations of the Nepal Police. Chand was the third in seniority rank.

On February 13, DIG Nawaraj Silwal filed a writ petition demanding that he should be appointed the IGP claiming that he is the senior most police official. The government had picked DIG Dinesh Chandra Pokharel as the acting IGP after the leadership selection courted controversy.

KATHMANDU, Oct 11: Nepal Army (NA) has filed a writ petition at the Supreme Court, demanding that the verdict of Kavre... Read More...

SC to announce verdict on Sharma's case on Friday

KATHMANDU, Aug 9: The Supreme Court is announce its verdict on Friday as hearing on the writ petition registered citing... Read More...

SC gives continuity to its stay order in IGP case

KATHMANDU, March 1: The Supreme Court has given continuity to its previous stay order to the government not to implement its... Read More...