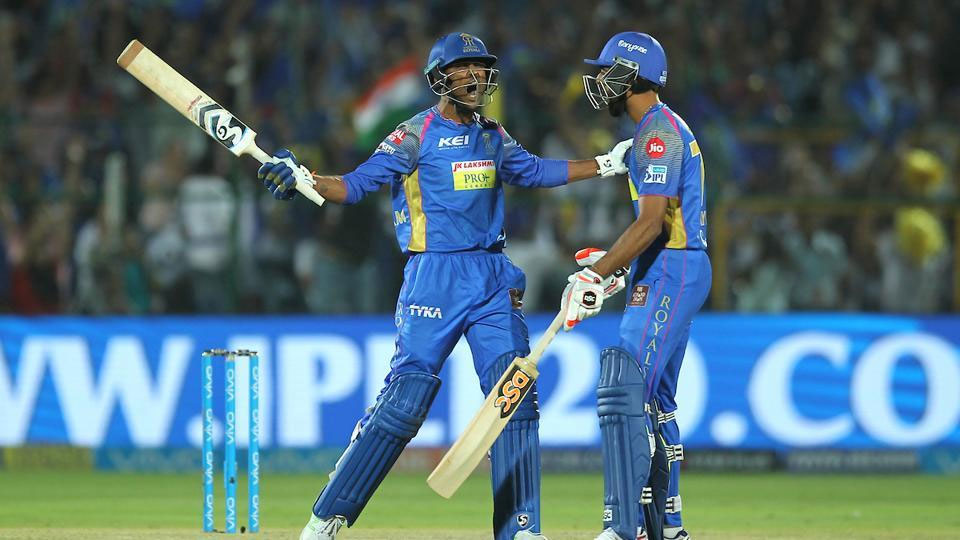 Gowtham Krishnappa of the Rajasthan Royals celebrates their win in the Indian Premier League 2018 (IPL 2018) against Mumbai Indians at the Sawai Mansingh Stadium in Jaipur on Sunday.(BCCI)

The 21st match of the 2018 Indian Premier League between Rajasthan Royals and Mumbai Indians was a match of contrasting death overs. Rohit Sharma’s side lost five wickets for 32 runs in the end after fifties from Suryakumar Yadav and Ishan Kishan. Rajasthan Royals also stuttered in the death, but Krishnappa Gowtham’s 11-ball 33 ensured Sanju Samson’s second fifty in this tournament did not go in vain as Rajasthan Royals secured a tense three-wicket win over Mumbai Indians at the Sawai Mansingh stadium on Sunday.

Chasing 168, Rajasthan Royals lost Rahul Tripathi, promoted to open the batting for nine with Krunal Pandya striking in his first over. Ajinka Rahane (14), the skipper, struck some lovely boundaries but he toe-ended Mitchell McClenaghan’s short ball to be caught at mid wicket.

However, Samson and Stokes steadied the ship with a 72-run stand. Stokes (40) fell to Hardik Pandya’s leg stump yorker while Samson hit his ninth IPL fifty. However, Jasprit Bumrah swung the pendulum towards Mumbai Indians as he got rid of Samson for 52 and bowled Jos Buttler (6) while Mustafizur Rahman accounted for Heinrich Klassen (0).

However, Gowtham proceeded to hammer 18 runs in the 19th over bowled by Bumrah. The right-hander calmly sealed the deal in the final over bowled by Hardik Pandya with a glided four over third man and launching the bowler over wide long on.

Gowtham’s cameo and Samson’s fifty complimented the effort of the bowlers, who stalled Rohit Sharma’s side after fifties from Suryakumar Yadav (72) and Ishan Kishan (58) put the three-time IPL champions on course for a big score.

At 130/1 in 14.2 overs, Mumbai Indians were targeting a score in excess of 200. However, led by a spirited bowling effort from Jofra Archer in the death overs, Rajasthan Royals clawed back into the contest.

Rohit (0) was run-out attempting a suicidal single and things got worse in the 19th over when debutant Archer, bought for Rs 7.2 crore in the player auction, took three wickets and ended with figures of 4-0-23-3. Mumbai Indians had struggled in the last five overs of the innings in this edition of the tournament and here, they managed just 32 runs and lost five wickets.

The death overs performance by Mumbai Indians would have disappointed Suryakumar and Kishan, whose fifties had given them a solid platform.

Opting to bat, Mumbai Indians started off on a disastrous note with Evin Lewis (0) falling in the first over bowled by Dhawal Kulkarni. After a slow start, Suryakumar opened up with some big hits off Dhawal Kulkarni.

Boosted by Suryakumar’s aggression, Kishan, who was under a fitness cloud following a blow to his cheek in the previous game, also raised his game. Suryakumar reached his second fifty in the 2018 IPL off 29 balls while Kishan took 35 balls to reach his landmark. However, the death overs collapse for Mumbai Indians handed the momentum to Rajasthan Royals, which the hosts capitalised, but only just.