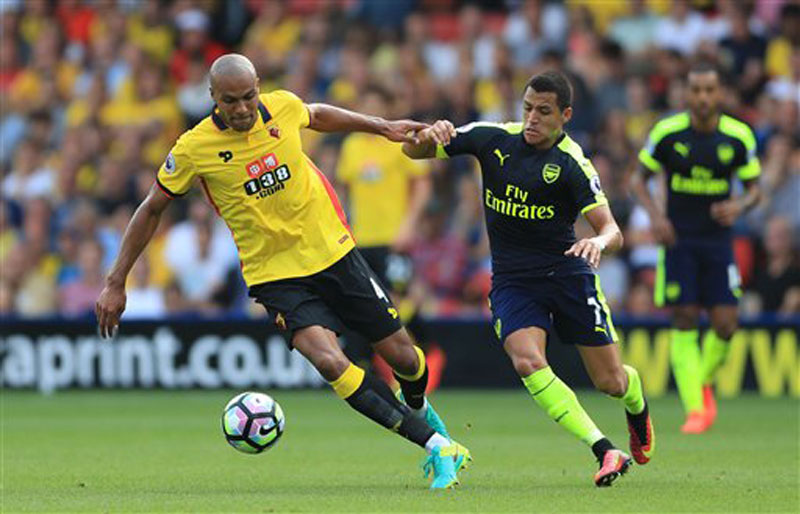 WATFORD, England, Aug 27: Alexis Sanchez scored one goal, set up another and also earned a penalty as Arsenal used a dominant first-half display to beat Watford 3-1 for its first win of the Premier League season on Saturday.

The Chile forward was brought down by Younes Kaboul's elbow, giving Santi Cazorla the opportunity to slot a penalty kick down the middle to put Arsenal ahead in the 9th minute.

Sanchez made it 2-0 in the 40th in slightly fortuitous circumstances. Meeting Theo Walcott's low cross from the right, Sanchez fell over while applying the finish but still managed to get the ball past Watford goalkeeper Heurelho Gomes and over the line before it could be cleared.

Mesut Ozil then made a late run into the box and headed in Sanchez's pinpoint cross from the left, giving Arsenal a 3-0 lead in first-half injury time.

Roberto Pereyra, recently bought from Juventus as Watford's record signing, came off the bench at halftime for his debut and reduced the deficit in the 57th with a powerful shot from a rebound.

The win will be a relief to Arsenal manager Arsene Wenger, who has come under renewed fire at the start of this season after his team failed to win either of its first games. A failure to sign any marquee players this transfer window has also infuriated some disillusioned fans, although Arsenal is on the brink of competing the signings of two players — Germany defender Shkodran Mustafi and Spanish striker Lucas Perez — before the window shuts on Wednesday.

Arsenal started the season by losing 4-3 at home to Liverpool, then drew 0-0 at Leicester.

The team's attack looked more potent with the return of Ozil, who was given extra time off following the European Championship.