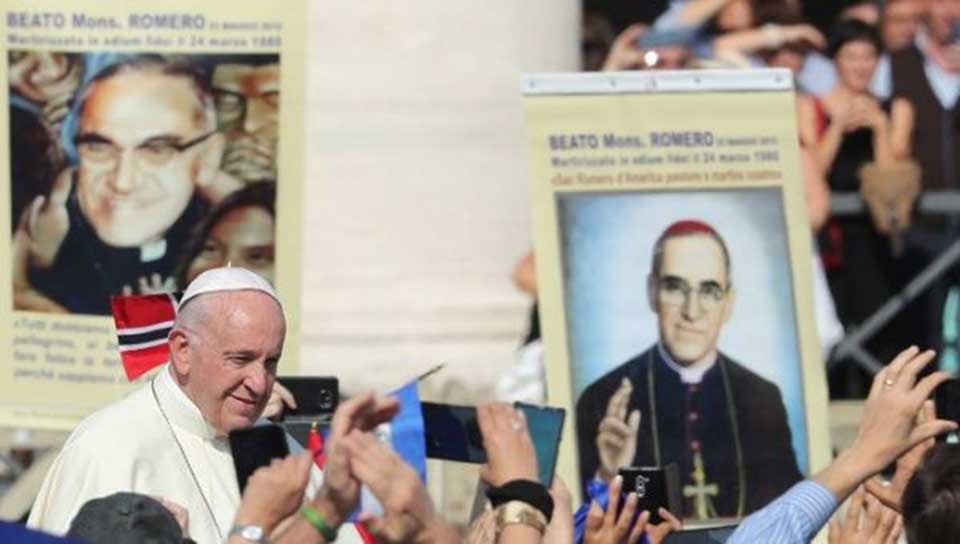 Pope Francis waves as he leaves after leading a Mass for the canonisation of the Pope Paul VI and El Salvador's Archbishop Oscar Romero at the Vatican Oct. 14, 2018. | Photo: Reuters

CARACAS, Oct 14: Pope Francis on Sunday made saint murdered Salvadoran Archbishop Oscar Romero praising him for disregarding his own life "to be close to the poor and to his people".

Romero, who had often denounced repression and poverty in his homilies, was shot dead on March 24, 1980, in a hospital chapel in San Salvador, the capital of the impoverished Central American country of El Salvador.

The leader of the Catholic Church said that Oscar Romero abandoned "the security of the world, including his own safety, to give his life according to the Gospel, close to the poor and his people, with a magnetized heart by Jesus and his brothers."

Arnulfo Romero was assassinated in 1980 when he officiated a mass. A report of the Report of the United Nations Truth Commission in 1993 blamed the death squads led by Colonel Roberto D'Aubuisson.

However, an amnesty law of 1993 prevented the opening of any proceedings against him. Other soldiers are also mentioned in the murder.

Romero raised his voice within popular movements to demand a halt to repression while denouncing the neoliberal economic system that condemned thousands of generations in his country misery and poverty.

In the canonization mass, the pope presented the relics of the new saints the shirt that Paul VI used in the attack in the Philippines, bone fragments of Monsignor Romero, Francesco Spinelli, Vincenzo Romano, Nunzio Sulprizio and Maria Caterina Kasper, and hair of Nazaria Ignacia.

Francis often quotes Paul, showing that he is committed to the reforms of the Council, which allowed the Mass to be said in local languages instead of Latin, declared respect for other religions, and launched a landmark reconciliation with Jews.

Paul also became the first pope in modern times to travel outside Italy to see faithful, ushering in a practice which has become synonymous with the papacy. He is the third pope that Francis has made a saint since his election in 2013.

July 31: A strong earthquake struck off the coast of El Salvador early on Wednesday, though emergency services said there... Read More...

BIRATNAGAR, May 8: A police investigation into the shooting of religious leader Acharya Sriniwas  has shown that the controversial godman had... Read More...