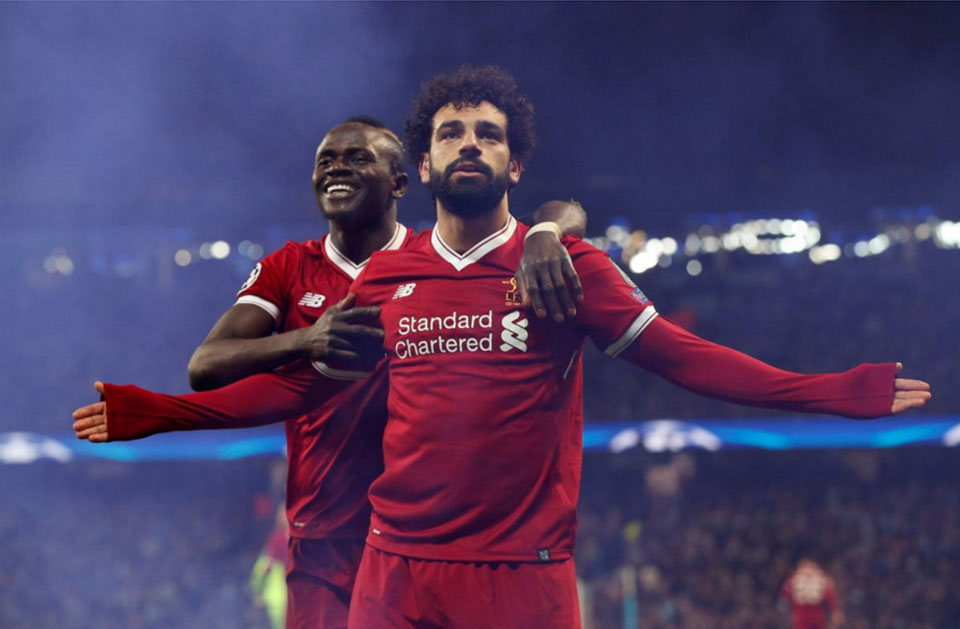 MANCHESTER, April 11: Liverpool reached the Champions League semi-finals for the first time in 10 years as Mohamed Salah and Roberto Firmino struck decisive blows to secure a 2-1 win over Manchester City on Tuesday that completed a 5-1 aggregate victory.

Trailing 3-0 from the first-leg City manager Pep Guardiola had said his team needed to produce a “perfect game” at the Etihad Stadium if they were to achieve a famous comeback and for 45 minutes they were not far off that level.

Yet it was Liverpool whose approach turned out to be perfect in the circumstances as they followed up some staunch first-half defending to level through Salah in the 56th minute and seal the tie through Firmino 13 minutes from fulltime, clinching their third win against City this season.

Gabriel Jesus had scored for the hosts after two minutes to fuel the home fans with hope and Guardiola’s side had then launched wave after wave of attacks to pin Liverpool back.

Yet after Bernardo Silva hit the post in the 40th minute and Leroy Sane had an effort ruled out for a disputed offside two minutes later, City had just the solitary goal to show for their first-half exertions.

“It was quite difficult tonight, especially with the start,” said Liverpool manager Juergen Klopp.

“This wonderful goal that we served them on a plate. I was expecting something like that but I liked the reaction immediately after that. They could’ve scored two or three goals in the first half but it was 100 percent clear that if we win the ball we’d have an opportunity.”

After a glorious attacking display in the first leg, Liverpool did exactly what they had to do in Manchester and deservedly took their place in the semi-finals.

City can look back with some pride though on their first-half performance. They needed an early goal to set the mood and they got exactly that.

Liverpool defender Virgil van Dijk gave the ball away and Fernandinho played a superb pass to Raheem Sterling on the right who slipped the ball across to Jesus to slot home.

CONSTANT PRESSURE
Fired-up by that breakthrough and with the crowd roaring them on, City were first to every ball, applying constant pressure on the Liverpool defence while Juergen Klopp’s side were unable to earn some respite.

Kevin De Bruyne tested Loris Karius with a low drive in the 27th minute and the home side had an appeal for a penalty turned down when former Liverpool forward Sterling went down in the box with Andy Robertson’s arms around him.

Yet for all the pressure, Liverpool’s defence held firm and City were unable to create another clear-cut chance until the 40th minute when Bernardo Silva cut in from the right and his fierce left-foot drive crashed off the post.

Two minutes later, Sane thought he had added a second, poking the ball over the line but the referee Antonio Mateu Lahoz ruled the German was offside. City protested strongly, arguing the ball towards Sane had come off Liverpool’s James Milner.

Liverpool sent a warning just before the break when Alex Oxlade-Chamberlain rounded Ederson after a swift attack but shot wide from a tight angle.

As the teams came off, Guardiola’s protests about Sane’s disallowed goal resulted in him being sent to the stands for the second half.

“In this competition the teams are so equal and the influence of refereeing decisions is so important,” said the Spaniard afterwards, denying he had insulted the referee.

All City’s breathless efforts were undone when Liverpool got the crucial away goal — Sadio Mane burst into the box, City keeper Ederson dived at his feet but the ball spilled out to Salah who took his time before coolly converting.

The goal left City needing to score four without reply to progress and 10 minutes later they threw on club-record scorer Sergio Aguero in the hope of a miracle.

Yet any lingering questions over who would advance to the last four were ended when Firmino robbed a sloppy Nicolas Otamendi and slotted past Ederson.

Guardiola, watching in the stands, put his head in his hands as his side’s European campaign ended.

July 27: Mohamed Salah is capable of delivering another season chock full of goals at Liverpool but his supporting cast... Read More...