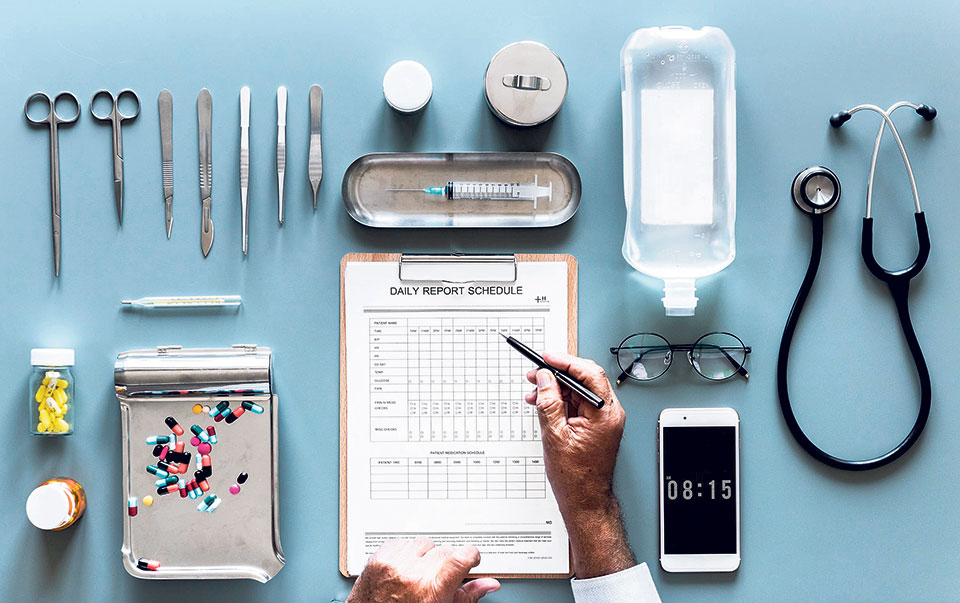 While a lot of these so-called helmet doctors and their affiliated hospitals aren’t exactly a credit to the profession or the field of medicine, no one deserves to work with the sword of Damocles hanging over their head.

The government’s civil and criminal codes that kicked in last month have been generating a lot of discontent, especially the provisions relating to the media and medicine sectors. It’s fair to say that while certain aspects of the media related provisions have more than a vindictive air about them given the recent exposés about politicians and their business relationships, it’s quite another thing when it comes to medical care. The criminalization of medical negligence can be explained by Hanlon’s Razor – the idea that you should never attribute to malice anything that can be explained by stupidity or incompetence. How else would you describe the reasoning behind these punitive measures?

In Nepal, what constitutes medical negligence and how you go about proving it is about as clear as your doctors’ handwriting. In a populist fit, the government decided – without due consultation and consideration of the different facets of medical care or current institutional mechanisms – to criminalize medical negligence. More often than not, medical negligence isn’t as clear cut as someone operating on the wrong leg and where there is ambiguity or doubt, all it takes is one spurious allegation from the bereaved party for a mob to descend on the hospital demanding justice.

So what this provision does in effect is legalize mob justice in the medical field. Doctors all over the country have lived in constant fear of a mob lynching for a very long time now and, being the son of a retired government doctor, I know that only too well. During our time living in government quarters in close proximity to the district hospital, I have witnessed several attempts at mob justice over what the bereaved believe were ‘preventable’ deaths. I still have vivid memories of my father trying to pacify the crowd in an attempt to save his colleague’s skin and I can’t remember having been more afraid for him.

While mobs in Kathmandu may jostle you around, crowds in the hinterlands are a lot scarier because they come fully weaponized with sticks, sickles, khukuris, and all manner of assorted agricultural implements. It doesn’t matter what caused the death or even who – it’s always the doctor that bears the brunt of these misunderstandings because while nurses and others are seen as caregivers or support staff, doctors have historically been seen as the decision makers aka the ones playing god.

In the above case, who really decided that the death was ‘preventable’ and caused due to medical negligence? That conclusion was arrived at by a group of angry and ill-informed laymen from the bereaved party after discussion amongst themselves. Also, it’s often in the hospital’s interests to get these issues settled financially instead of risking damage to property or, more importantly in the era of social media, damage to their reputation and future earnings. These quick settlements often have the effect of letting people know that hospitals are malleable to mobs demanding justice for the deceased and emboldening them to repeat it in the future. Currently, this is what transpires in the name of justice and by criminalizing medical negligence, without a mechanism to address the ‘what and how’s’, the government has basically just rubber stamped this practice into legislation.

While these sorts of incidents in the past were an expression of anger (including rubbing black ink on the doctors’ faces) and ignorance, now they have morphed into something that focuses on commercialization and monetization of bereavement. This is manifested in the organized demands for compensation that are a feature of these mobs protesting against doctors and the hospital administration. This trial by mob system is open to exploitation by unscrupulous elements and there are suspicions of organized gangs of rabble rousers striking a bargain with the family of the deceased to extort money from hospitals.

If you think that is a bit far-fetched, you have obviously never seen an entire village rally around a dead chicken and block a national highway for hours demanding compensation for the chicken, all the eggs it would have laid in the future, and the fine meal it would have made one day. In Nepal, if there’s money to be made from someone else’s misfortune all you really need is a misplaced sense of injustice, people in significant numbers, and a lot of shouting and unfounded allegations. Ka-ching!

While a lot of these so-called helmet doctors and their affiliated hospitals aren’t exactly a credit to the profession or the field of medicine, no one deserves to work with the sword of Damocles hanging over their head. The government needs to find middle ground with the NMA on this because with this punitive system in place, who would, in their right mind and with their training, handle any emergency or critical case that they know might end in tears? The entire essence of the medical field, its humanitarian calling, and the nobility of the profession will be destroyed by one simplistic, ill-advised piece of legislation. And it’s hard to think of anything sadder than that.

KATHMANDU, July 28: Minister for Foreign Affairs Pradeep Gyawali, who is on a visit to three European countries, said the... Read More...

'Incumbent government in favor of rule of law'