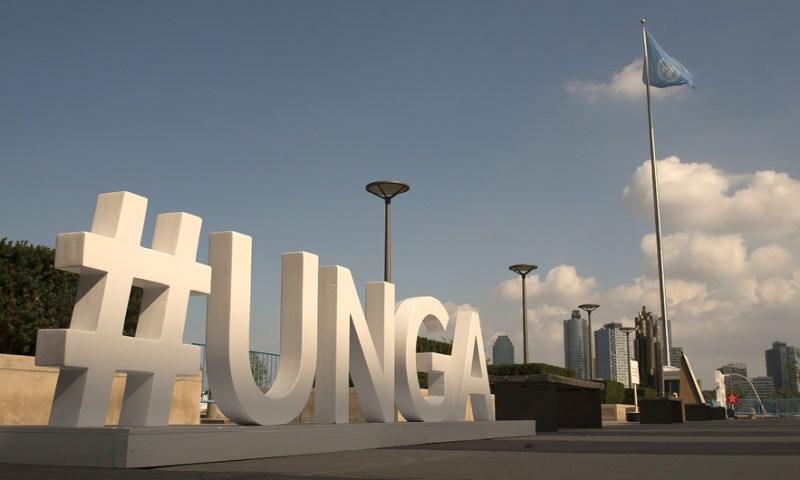 NEW YORK, Sept 28: New York: External Affairs Minister Sushma Swaraj emphasised to SAARC countries that an environment of peace and security in South Asia is essential for cooperation and economic development, but Pakistan accused India of obstructing the region's progress and prosperity.

Swaraj's statement on Thursday came at a meeting of South Asian Association for Regional Cooperation on the sidelines of the ongoing United Nations General Assembly session in New York.

The SAARC grouping includes India, Pakistan and six other regional countries. It was established in December 1985 with an aim to promote the welfare of the peoples of South Asia. "An environment of peace and security is essential for regional cooperation to progress and achieve economic development and prosperity of our people," Swaraj said at the SAARC Ministers Meeting.

She said the number of incidents endangering South Asia is on the rise and terrorism remains the single-largest threat to peace and stability in the geopolitical region, and the world. "It is necessary that we eliminate the scourge of terrorism in all its forms, without any discrimination, and end the ecosystem of its support," she said according to sources. Swaraj left the SAARC meeting early.

Shortly after her statement, Pakistan Foreign Minister Shah Mehmood Qureshi told reporters that Pakistan wants to see SAARC become result-oriented. "We have to decide the next step. I have no hesitation in saying that in the way of SAARC's progress and in the way of the region's connectivity and prosperity, there is only one obstruction and one attitude. The attitude of one nation is making the spirit of SAARC and the spirit of the founding fathers of SAARC unfulfilled," he said, without naming India.

Asked if he had talks with Swaraj at the meeting, Qureshi denied. "She left the meeting mid-way, maybe she was not feeling well," he said. He said Swaraj talked about regional cooperation, but "my question is how will regional cooperation be possible when the regional nations are ready to sit together and you are the obstruction in that dialogue and discussion."

Qureshi said a majority of the members present in the meeting understands the significance of SAARC. "They want to move on. I can't speak for them but I can deduce from their body language, disappointment; because if you do not move on and if you do not sit and convene meetings how do you move on," he said.
He cited other regional groupings such as ASEAN and the EU and said: "look at this (SAARC) atmosphere." He called Swaraj's statement at the meeting "very vague". He said "you said the next summit will not happen until there is a conducive environment. How do you define what conducive environment is? It can vary from country to country."

Qureshi's remarks came days after New Delhi cancelled a proposed meeting between foreign ministers of India and Pakistan in New York. India cited attacks by Islamabad-backed groups in Jammu and Kashmir and stamps released by Pakistan glorifying Kashmiri terrorists as reasons for cancellation of the proposed talks.
SAARC member-states have previously said they view the strained relations between India and Pakistan as one of the reasons for the little progress achieved by the geopolitical grouping in recent years.

Nepal And Sri Lanka have expressed interest in reviving the summit postponed in 2016 after New Delhi pulled out over Islamabad's unrelenting support to terrorist activities in India and after Pakistan-based terrorists attack an Indian Army base in Uri. Bhutan, Bangladesh and Afghanistan had also joined India in boycotting the summit.

SAARC summits are usually held biennially. The member-state hosting the summit assumes the Chair of the association. The last SAARC Summit in 2014 was held in Kathmandu, which was attended by Prime Minister Narendra Modi.

Govt, ASDP and NACCFL sign deal for capacity buildings of cooperatives in Karnali
10 minutes ago