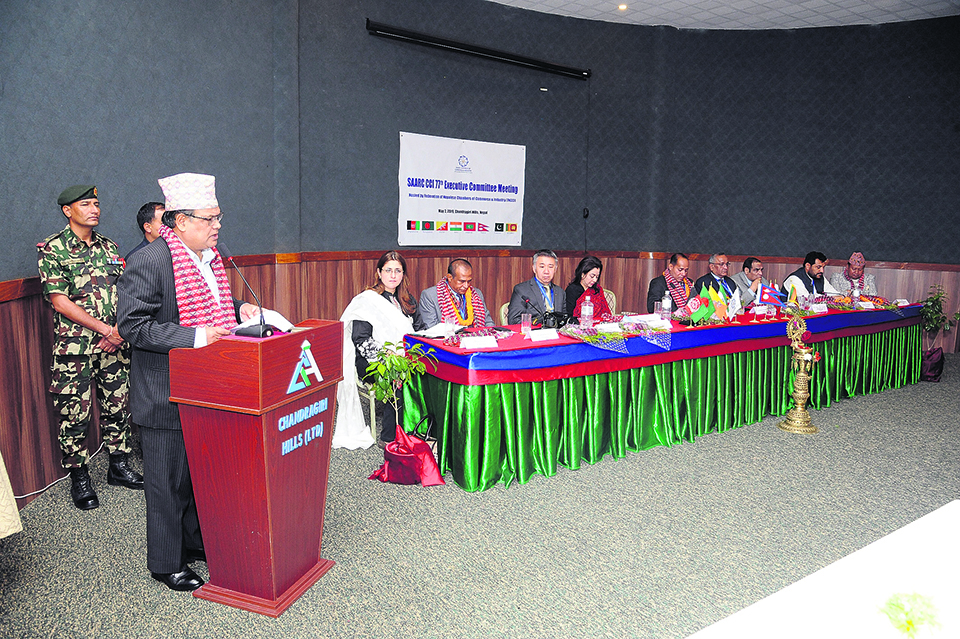 KATHMANDU, May 3: The 77th meeting of the executive committee and 23rd general assembly of SAARC Chamber of Commerce and Industry (SAARC CCI) has kicked off in Kathmandu. Krishna Bahadur Mahara, speaker of the Federal Parliament, inaugurated the meeting amid a ceremony held at Chandragiri Hills.

Addressing the inaugural session, Mahara said that the initiatives taken by chamber for prosperity of the region would help to achieve the objectives of the SAARC. Commending the role of the SAARC CCI for working toward strengthening business and economic ties of SAARC members, he also said that it should help in attracting and promoting foreign direct investment in the region.

“There is a need for joint efforts to uplift economic conditions of this region by fostering their economic, social and cultural ties,” he added.

SAARC CCI, recognized as a regional apex trade body by SAARC, is a group of eight national federation chambers of commerce and industry of the member states of SAARC. Among others, SAARC CCI makes recommendations to safeguard the economic and business interests of the SAARC and serves as a consultative body of the private sector of the region to provide input and feedback on regional economic issues.

Also addressing the inaugural session, Bhawani Rana, President of the Federation of Nepalese Chambers of Commerce and Industry (FNCCI), said that Nepal was becoming an attractive destination for investment in South Asia. She said that the recently concluded Nepal Investment Summit has sent a message to the world that Nepal was creating environment conducive for investment.

She was of the view that the private sector can play a crucial role in forging economic and business linkages in the SAARC region.

Similarly, Mazhar Javed, Ambassador of Pakistan to Nepal, opined that business organizations like SAARC CCI should play a lead role in translating ‘prosperous region and happy people’ slogan into practice in the whole SAARC region.

Private sector leaders of South Asia have underlined the need for deeper integration in the region. Ruwan Edirisinghe, president of SAARC CCI, said that regional cooperation, connectivity and free flow of people are must for economic development of the region. “We should work collectively for deepening the integration of the region,” he added.

Also speaking at the inaugural session, Chandi Raj Dhakal, distinguished member of the FNCCI, said that the chamber should move ahead by identifying areas of mutual cooperation. He also pointed out infrastructure development, energy, technology and tourism, among others, as areas for cooperation and investment.

KMC to run free ambulance service during Dashain
39 minutes ago