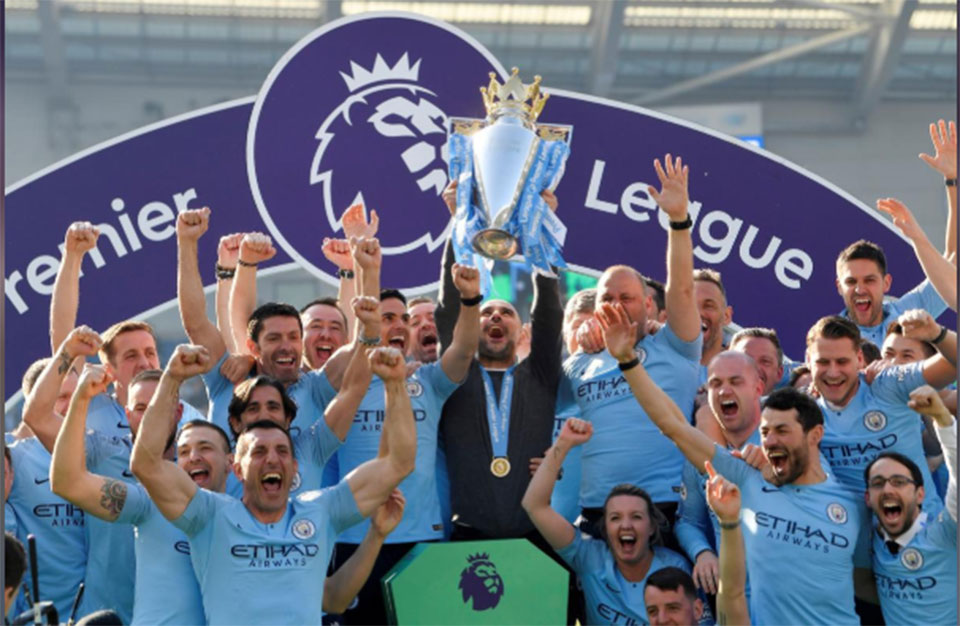 Manchester City clinched the Premier League title with the win required to finally end Liverpool’s relentless attempt to dethrone them as champions by crushing Brighton & Hove Albion 4-1 on the south-coast on Sunday.

Pep Guardiola’s City ended the season with 98 points, two shy of last season’s record-breaking 100, while Liverpool’s 2-0 victory over Wolverhampton Wanderers saw them finish on 97 — by far the largest tally for a Premier League runners-up spot.

Such was Liverpool’s tenacity in the title race that it took an incredible 14th straight league victory for Abu Dhabi-owned City to become the first club for a decade to retain the title.

Neither side dropped a league point since Liverpool were held to a 0-0 draw at Merseyside rivals Everton on March 3 with Juergen Klopp’s side winning their last nine matches.

“We have to say congratulations to Liverpool and thank you because they pushed us to increase our standard,” said Guardiola who now has two league titles with City to go with the three he won in charge of both Barcelona and Bayern Munich.

There was only a brief moment of panic for City when Glenn Murray’s header gave Brighton a surprise 27th minute lead.

But cometh the moment, cometh Aguero.

Aymeric Laporte’s thumping header put City ahead before the break but with Liverpool, who began the day one point behind, leading against Wolves, hope remained at Anfield that something extraordinary could happen in the south-coast sunshine.

But when City winger Mahrez drove an unstoppable shot past Brighton goalkeeper Mathew Ryan’s despairing dive just past the hour and Gundogan’s majestic free kick found the net in the 72nd minute the City fans could get the party started.

City have now won four league titles in eight seasons but captain Vincent Kompany, whose sublime shot earned a crucial 1-0 win over Leicester City on Monday to keep his side’s fate in their own hands, said this was the most satisfying of them all.

“Back to back, it was the hardest and most satisfying ever. Liverpool were exceptional this year. I don’t mean to rub it in — they didn’t deserve to lose,” Kompany said.

“But we played against such a good team all season and until now we were able to stay in front.”

Spaniard Guardiola can now became the first manager to claim the English domestic treble if City beat Watford in next week’s FA Cup final, having already scooped up the League Cup.

He was given the bumps by his players after the trophy was delivered while City’s fans belted out their anthem “Blue Moon”.

City began the day looking edgy and, with Brighton’s fans chanting that Liverpool had scored against Wolves, an incredible week of football drama looked like it had one last twist, especially when Murray headed home an inswinging corner.

The swagger returned to City and after Mahrez’s shot was well saved by Ryan, the resulting corner saw defender Laporte power home only his third league goal of the season.

Brighton centre back Lewis Dunk reminded City of the precariousness of the situation with a dipping free kick that keeper Ederson did well to turn over on the stroke of halftime.

But after the break it was all City.

Mahrez, the magician behind Leicester City’s incredible title triumph in 2016, cut in and let fly with his right foot to spark delirium from the City fans packed in behind the goal.

City have now taken an almost unbelievable 198 points in the last two seasons and Gundogan’s free kick took their goal tally in the last two Premier League campaigns to 201.

LONDON, May 19: Belgian defender Vincent Kompany said on Sunday he would be leaving Manchester City after helping the Premier... Read More...

“Mr Prime Minister, how would you feel if you didn’t get a kidney ahead of transplantation?” (with video)
8 hours ago

Where to contact if someone needs Remdesivir?
18 hours ago
Sagarmatha sees first deaths of 2021 expedition
16 hours ago

Kathmandu DAO urges hospitals to not create panic
17 hours ago