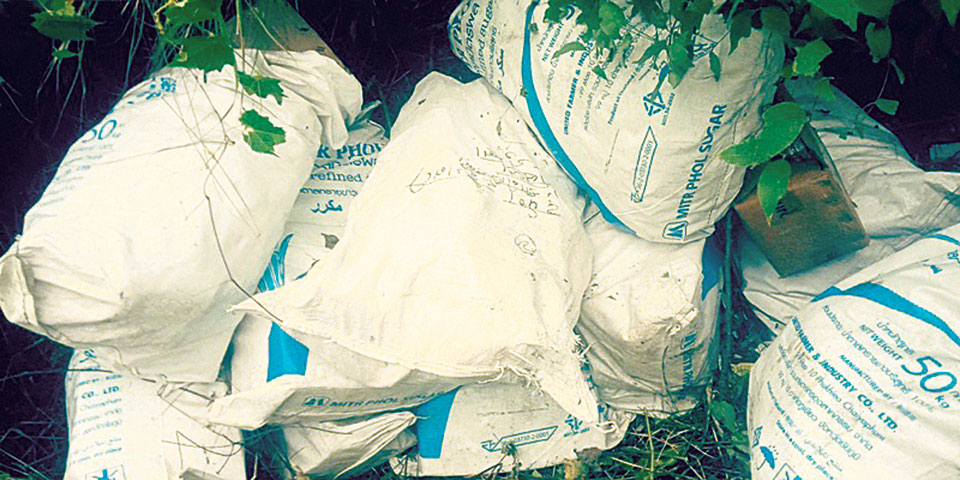 JUMLA, Oct 23: Utter negligence and mismanagement of drug supply has come to the fore in Jumla. While the lack of medicines in health posts and hospitals is not a new tale in this rural zone, locals are enraged after seeing medicines dumped on riverside in Kakan Sundari Rural Municipality.

They are demanding investigation into the sacks of drugs seen scattered on river banks in Kanaka Sundari area recently.

“We are shocked to see this. They have thrown medicines near the river,” said Dhana Budha of Kanaka Sundari Rural Municipality – 6. “Where did the medicines come from? We are shocked considering the fact that health posts do not provide even free medicines to public stating they don’t have medicine in stock,” he added.

Health division of Kanaka Sundar Rural Municipality has admitted that the expired drugs were dumped recently. Because the drugs were expired, there was no option other than to dump them, the administration defended.

Saline water, Paracetamole, and several types of pills and capsules have been dumped by the health posts in the rural municipality. Similarly, packets of condom, needle, among others have also been dumped.

Locals have raised serious question over it. This has triggered heated debate between the public and local representatives.

Noticeably, as usual, there is lack of medicines in most of the health centers in the rural municipality. Locals state that they are sent off to private pharmacies even for buying basic drugs.

According to Budha, treatment and medicines are very costly in the region and ordinary person has to sell off land and house when health problem emerges. But the apathy of the government towards people’s health has continued, he claimed.

Local of the same ward, Ram Bahadur Budha urges the local government to be sensitive towards people’s health rights. Despite the existence of five heath posts in the rural municipality, locals have been forced to go to private clinics even for minor health issue, he noted.

Terming the recent case of dumping of medicines in river as corruption, he has demanded thorough investigation into the matter and severe punishment to the guilty.

He also claimed that the situation drug distribution is not as worse as people report. The rural municipality has tried its best to supply as many types of drugs to people as possible, he said. “It is not that we have thrown all medicines in the river. We have dumped expired medicine,” he said.

SIRAHA, March 16: Rambilas Yadav of Mirchaiya-8, Phulbariya sustained a deep cut to his hand while collecting fodder on Tuesday. He... Read More...

PALPA, June 7: As monsoon is just around the corner, almost all local units of Palpa have started purchasing the required... Read More...