KATHMANDU, March 31: A total of Rs 207.31 million has been collected in a fund set up by the government to combat the spread of COVID-19.

According to the Office of the Prime Minister and Council of Ministers (OPMCM), the fund – Corona Virus Control and Treatment Fund – has received donations from various organizations, firms and individuals totaling Rs 207.31 million until Monday evening. 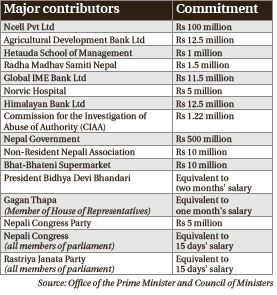 The government established the fund last week and appealed to all companies, organizations and individuals to make their contributions to the fund that will be used for the control and treatment of coronavirus infected people. In line with the government's request, over a dozen companies and organizations have already deposited millions of rupees in the bank account of the government fund.

Similarly, there are organizations and individuals who have also contributed in the government fund whose identity has been withheld.

While many other companies and organizations have announced to contribute in the fund, the commitment is yet to be realized. The government itself has made commitment of Rs 500 million in the fund while Bhat-Bhateni Supermarket has announced a contribution of Rs 10 million. Non-Resident Nepali Association (Rs 10 million), the President (amount equivalent to salary of two months), Gagan Thapa (one month salary as parliamentarian) and Nepali Congress (Rs 5 million) have also made commitment to contribute in the fund.

The government has set an account at Rastriya Banijya Bank Ltd (Account Number: 196000001101) and encouraged all to donate in the fund.

To promote corporate giving, the government has also announced that the money deposited in the fund will be allowed to deduct as expenses for any firm. This deduction will waive off tax for companies that they were required to pay even for the charity. Similarly, Nepal Rastra Bank (NRB) has also allowed bank and financial institutions (BFIs) to count their contribution in this as well as similar funds created by provincial governments as their spending under corporate social responsibility (CSR). By defining sectors where BFIs can spend such amount, the central bank requires each institution to spend at least 1 percent of their net profit in the CSR activities.

Government officials say that the fund will be utilized in the initiatives to control the spread of coronavirus and treatment of the disease. It set up the fund to tap into generosity of firms, individuals and organizations to cope with the pandemic.

Amid concerns about possibility of irregularities from the unchecked collection of funds, the government on Wednesday also decided to restrict others from establishing separate fund to respond to the coronavirus disease (COVID-19). The government has urged those, who have already set up separate funds, to collect money only from within organizations or people working under them. The collected money should be handed over to the government's fund within seven days, according to the government.

KATHMANDU, May 9: The Nepal Distilleries has announced to support the needy amid the coronavirus pandemic by depositing Rs 1000... Read More...

KATHMANDU, March 25: The government has restricted any agency, organization or company from establishing a separate fund to respond to... Read More...