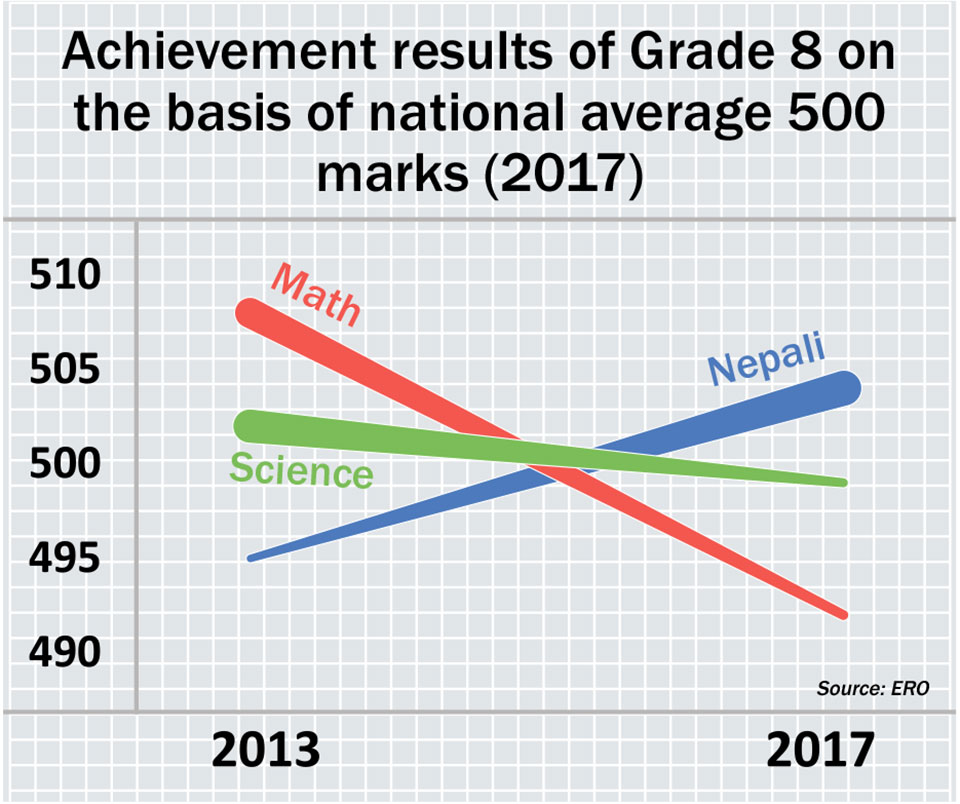 The assessment shows that the achievement in two subjects – Math and Science – declined between 2013 and 2017, according to  MoEST.

Achievement results for Grade 8 were assessed on the basis of the national average of 500 marks (2017).

Both SSRP and SSDP  are donor-funded centralized programs. The World Bank is the major contributor to the programs.

High-ranking officials at MoEST described how the donors, including the World Bank, have injected their programs in Nepal. “They first propose the programs. Then they assure cooperation, but not the full project amount. Later, they propose to us to accept their agenda in return for the assistance. This is how they have influenced Nepal’s programs,” said the officials, terming these as off-hand comments. “Private schools also put pressure on the government not to implement NCF, which might require hiring more teachers  and  add to their expenditures.”

After assuming office, Minister for Education, Science and Technology Giriraj Mani Pokharel came up with a five-year road map that included formulation of the NCF for improving education, including school education.

According to  MoEST brass, Math was a compulsory subject for the Science group in the first draft of the NCF. But it was made an optional subject in the Science Bio group. Under the influence of the World Bank officials, the Nepal Study subject was changed into Social Studies. “World Bank representative Rajendra Dhoj Joshi visited the ministry at the final hour and got it to change the draft,” they said. Speaking to Republica, Joshi said he visited Minister Pokharel at the latter’s request and urged the ministry to make Math optional for Grades  11 and 12. “Students should be given a choice since Grades 11 and 12 are the time when they choose their careers,” he clarified.

Prof Wagle is dissatisfied over the eleventh-hour change to the NCF draft. “We studied national, regional and international curricula as well as the UN’s Sustainable Development Goals (SDGs). We then  recommended five compulsory subjects – Nepali, English, Science, Math and Nepal Study for Grades 9-12, and two optional subjects,” he said. “Changing Nepal Study to Social Studies is not unacceptable as it includes broader content but removing Math is unacceptable as it lowers the standard of school education.”

“We objected during  the meeting with Minister Pokharel. Math and Science should be compulsory in school education in order to compete in the international arena. Students can select any two optional subjects from Science, Humanities, Management or other streams. Otherwise, our education will become inferior,” said Wagle, adding that donors might have an interest in changing the curricula in order to show better results for the SSDP.

World Bank’s Nepal Country Office has rejected accusations of involvement in exerting pressure to modify  the curricula of Grades 11 and 12. Faris Hadad-Zervos, the country manager, says  the World Bank and a group of development partners finance a part of the Government of Nepal’s expenditures in implementing its SSDP through a Sector Wide Approach (SWAP). “World Bank funding is especially linked to progress in agreed results in the Grades 9-10 curricula, and not Grades 11-12. Our support seeks greater access to and achievements in Language, Science and Mathematics,” Faris said. “This corresponds with the World Bank’s global advocacy for Science, Technology, Engineering and Mathematics (STEM) as indispensable academic disciplines,” Faris claimed.

Minister Pokharel, meanwhile, said  the NCF has been put on hold, owing to the controversy. “I take these controversies as an opportunity to improve. The stakeholders also showed great interest in this,” he said. “Only the NCF policy has been approved. We will hold discussions with the universities on credit hours, subjects and the academic calendar of school education.”

Pokharel denied that there was any pressure  on him.  “I will not be influenced by pressure and I should not be. I will work to ensure local, national and international standards  for school education curricula and more,” he added.

NOC collects Rs 13b for Budhi Gandaki project from consumers

Raute people gear up to celebrate Dashain
3 hours ago