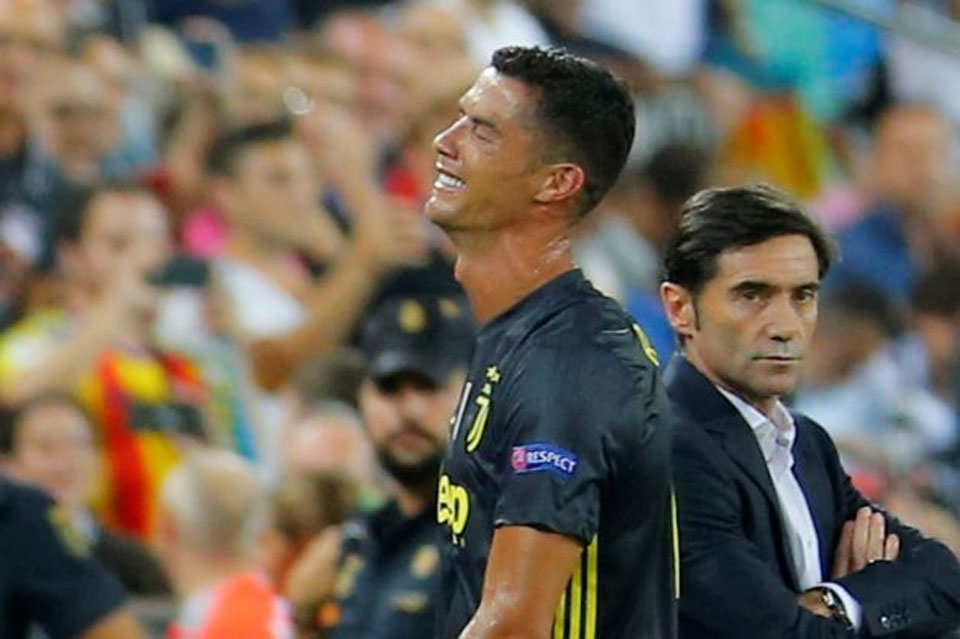 VALENCIA, Sept 20: Cristiano Ronaldo’s Champions League debut for Juventus lasted only 29 minutes as he was red-carded but the Italians began their Group H campaign impressively with a 2-0 victory at Valencia on Wednesday.

Penalties either side of halftime by Miralem Pjanic sealed the points for the visitors as Valencia’s return to European competition after a two-year absence fell flat.

The night was meant to be all about Ronaldo’s first Champions League appearance for the club he has tormented so often down the years for Real Madrid.

His first real impression, however, was not what anyone in the Mestalla could have imagined though as he was sent off for the first time in the Champions League in his 154th appearance.

After a lively opening half hour the Portuguese forward, scorer of a record 121 Champions League goals, was involved in a tangle in the penalty area with Valencia defender Jeison Murillo as he awaited a cross from the left.

It did not appear too sinister but German referee Felix Brych, after consulting with his assistant behind the goal, pulled out his red card to the dismay of Ronaldo.

After leaving the pitch the five-times Champions League winner, whose stoppage time penalty for Real Madrid knocked Juve out in the quarter-finals last season, waited by the tunnel entrance, seemingly on the verge of tears.

Juventus responded to the shock in positive fashion and were ahead before halftime.

They had already threatened to pierce Valencia’s rearguard with Joao Cancelo having an effort turned on to the woodwork by Valencia keeper Neto and Sami Khedira wasting a good chance for the Italian champions.

On the stroke of halftime Daniel Parejo’s reckless challenge on Cancelo earned him a booking and gave Pjanic the chance to send 10-man Juventus into the interval ahead.

Five minutes after the break the home crowd fell silent when Jeison Murillo pushed Juventus defender Leonardo Bonucci in the back and Brych pointed to the spot again.

Once again Neto guessed right but Pjanic’s penalty was placed into the corner.

Valencia dominated possession after that but Juventus’s well-drilled defence held firm until stoppage time when Brych awarded the third penalty of the game.

Parejo stepped up but Wojciech Szczesny saved his spot-kick to sum up the Spanish side’s frustrating evening.

Bonucci, who was imperious throughout, said Juve’s togetherness had helped them prevail in difficult circumstances.

“We proved to be a very united team,” he said. “We continued to play our football even with 10 men.

“We all suffered together in the final stages of the game but this is a great group and we proved it again tonight.”

Ronaldo’s red card will mean he is likely to miss Juve’s clash against his former club Manchester United who they face in the third round of fixtures.