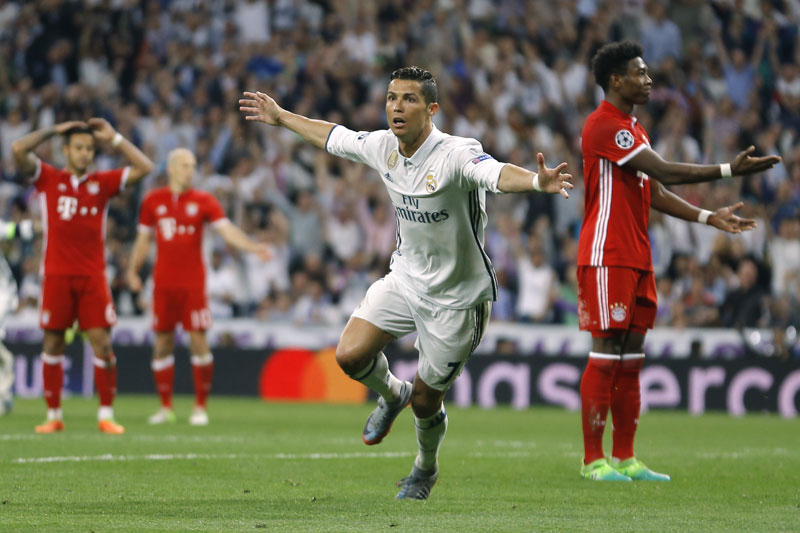 MADRID, April 19:  With a hat trick that made him the first player to score 100 Champions League goals, Cristiano Ronaldo led Real Madrid to a 4-2 win over 10-man Bayern Munich after extra time on Tuesday and put the defending champions back in the semifinals.

Ronaldo scored once in regulation and twice in extra time, while Marco Asensio also netted late for Madrid, which advanced 6-3 on aggregate after a 2-1 first leg win in Germany.

"In the big moments, Ronaldo always comes through," Madrid coach Zinedine Zidane said. "He scored five times in these two games, what else can I say?"

Ronaldo had scored both goals for Madrid in the first leg, when he became the first player to reach 100 goals in European club competition.

Bayern played a man down from the 84th minute after Arturo Vidal picked up his second yellow card of the night for a foul on Asensio.

"We deserved more," said Bayern coach Carlo Ancelotti, who complained about the refereeing. "The calls made by the referee hurt us a lot. The second yellow for Arturo should not have been a card, and Ronaldo had two goals when he was offside."

Ronaldo appeared to be in front of the defenders, and just offside, for his first goal in extra time.

Vidal appeared to mainly get the ball in his challenge on Asensio, although he could have received a second yellow earlier for a foul on Casemiro.

After Robert Lewandowski had scored a 53rd minute penalty for Bayern, an own-goal by Madrid defender Sergio Ramos in the 78th had given the German side a 2-1 lead in regulation time, and sent the game into extra time.

The victory at the Santiago Bernabeu Stadium put Madrid into the semifinals for the seventh straight season and kept alive its hopes of becoming the first team to retain the Champions League title since the competition's new format was created in 1992.

Madrid defeated city rival Atletico Madrid in the final both in 2014 and 2016.

Atletico also made it to the semifinals by eliminating Leicester 2-1 on aggregate after a 1-1 draw in Tuesday's other quarterfinal, second-leg match.

Bayern, the 2013 Champions League winner, had made it at least to the semifinals for the last five seasons.

"We played a lot of difficult matches this season, but this one was the most difficult one," Zidane said. "In the end, over the two legs, we deserved to go through."

The opening 45 minutes were balanced between the two sides, but Bayern was dominant after halftime as it pressed forward, trying to overturn the first-leg deficit.

"The team was courageous," Bayern defender Philipp Lahm said. "It hurts to go out in extra time, but we were a man down for over an hour across the tie. I think the team deserved to go through."

Bayern also played with 10 men in the second half of the game in Germany.

Lewandowski, who had missed the first leg because of a right shoulder injury, calmly scored from the spot with a right-foot shot, sending Keylor Navas the wrong way.

The penalty was awarded after a foul by Casemiro on Arjen Robben.

Not long before the penalty, Marcelo had prevented Bayern from scoring by making a goal line clearance after a shot by Robben had beaten Navas.

Ronaldo scored his first goal of the night with a header in the 76th minute after a well-placed cross by Casemiro from the right flank.

Two minutes later, though, Ramos found his own net when his deflection sent the ball trickling across the goal line. The Spanish defender was making his 100th Champions League appearance.

Ronaldo put Madrid back in control when he chested down a pass by Ramos and fired a left-foot shot that went underneath Bayern goalkeeper Manuel Neuer in the 105th minute.

He added another from close range after a run by Marcelo down the left flank in the 110th, and Asensio sealed the victory after getting past a series of defenders and firing home from inside the area in the 112th.

Bayern was trying to become only the third team to reverse a first-leg home loss in Champions League history, along with Inter Milan in 2011 and Ajax in 1996.

"I think we played well overall and we can leave with our heads held high," Bayern defender Jerome Boateng said.

Security guards and Bayern fans got into a confrontation at the stands at halftime but the altercation ended quickly.

NRNA to provide scholarships to 5,000 students
7 hours ago

Nearly 15,000 goats sacrificed at Rajdevi temple in Janakpur
9 hours ago

Dhulikhel Municipality submits report on SDGs to UN
6 hours ago

NRNA to provide scholarships to 5,000 students
7 hours ago