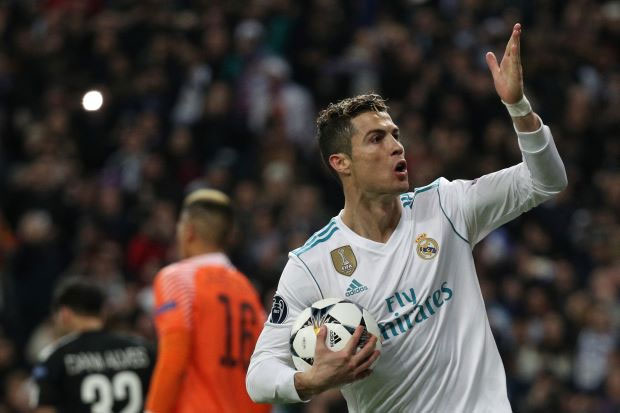 MADRID, Feb 15: Cristiano Ronaldo scored twice as Real Madrid came from behind to beat Paris St Germain 3-1 on Wednesday, with the holders roaring back to life in the Champions League last-16 first leg tie after a dismal domestic campaign.

Adrien Rabiot smashed runaway Ligue 1 leaders PSG ahead in the 33rd minute but Ronaldo levelled from the penalty spot on the stroke of halftime, scoring his 100th Champions League goal for Real to set up a pulsating second half.

Ronaldo put Real in front in the 83rd minute with a scrappy strike from close range, following a cross by Marco Asensio, who made an impressive cameo appearance off the bench.

Brazilian left back Marcelo further stretched the lead in the 86th, giving PSG a tough task in the second leg at the Parc des Princes on March 6.

The tie pitted 12-times European champions Real against the Qatar-backed Parisians who have never gone beyond the quarter-finals in the competition but boasted an attacking trio that cost over 460 million euros (408.67 million pounds) to assemble in transfer fees alone. The two squads’ combined cost exceeded 1.2 billion euros.

“This is a very important victory, these Champions League games are nights you always want to remember and we showed exactly how you need to play,” Real captain Sergio Ramos told reporters.

“We showed lots of personality and proved that despite all the speculation about us you can never presume Madrid are dead.”

Embattled Real coach Zinedine Zidane has faced serious questions this season with his side falling 17 points behind Liga leaders Barcelona.

He played a master stroke, however, in reverting to almost the same lineup that outclassed Juventus to win last year’s final, leaving Gareth Bale out for Isco.

Real had more of the ball and created the first clear chance when Ronaldo fired a shot against the face of PSG goalkeeper Alphonse Areola.

The French side opened the scoring when Kylian Mbappe flew past two players to play a low pass towards Neymar in the box but Nacho’s attempted clearance sent it towards Rabiot, who buried it straight into the middle of the net.

Ronaldo fizzed a shot over the bar at the other end but made no mistake when Giovani Lo Celso was penalised for tugging Toni Kroos’s shirt in the area.

PSG were denied a penalty when a shot from Rabiot appeared to strike Madrid captain Sergio Ramos on the arm, while Mbappe spurned their best chance of the second half when he fired straight at Madrid goalkeeper Keylor Navas.

PSG coach Unai Emery turned his fire on Italian referee Gianluca Rocchi after the defeat but said his side could still turn the tie around back in the French capital.

“I think our team played a great game but we got a bad result. We played with a lot of character,” he said.

”I think we deserved a better result. Everything is decided by small details and I don’t think the referee helped us.

“We have to be optimistic for the second leg and keep playing how we have been. We have to recover and qualify for the next round.”

Only NC has the most acceptable presidential candidate: Karki
8 minutes ago