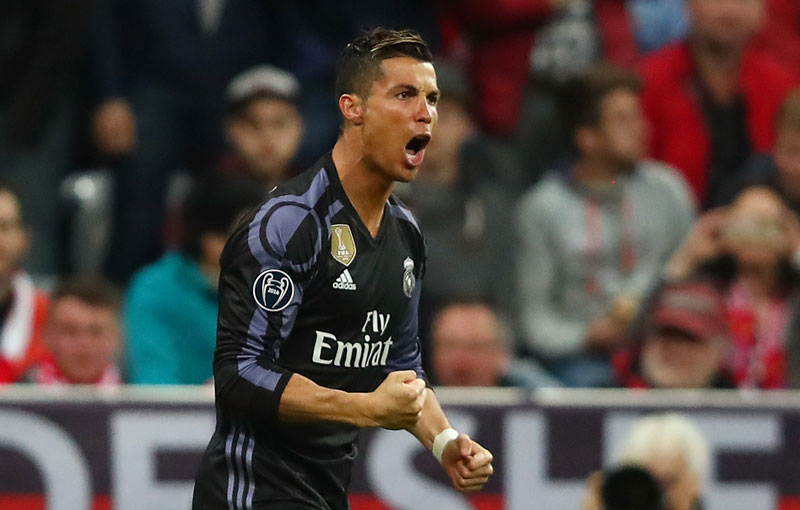 MUNICH, April 13: Cristiano Ronaldo became the first player to score 100 goals in UEFA competitions when he struck twice as holders Real Madrid came from behind to win 2-1 at Bayern Munich in the first leg of their Champions League quarter-final on Wednesday.

Bayern's Arturo Vidal opened the scoring and missed a penalty before Ronaldo volleyed the equalizer in the 47th minute and scored the winner 13 minutes from time when he was picked out by Marco Asenio and finished calmly.

Bayern, who had won their last 16 home games in the competition since losing to Real in April 2014, started strongly and took the lead when Vidal met Thiago Alcantara's corner with a thumping header in the 25th minute.

Vidal could have given the hosts a two-goal cushion from the spot in first-half stoppage time following Dani Carvajal's handball, but stepping up in place of injured striker Robert Lewandowski he blazed the penalty over the bar.

The result left Bayern with much to do in the second leg on Tuesday, while Real remained on course in their bid to become the first side to retain the Champions League crown.

The France striker was fouled by Leicester's Marc Albrighton on the edge of the box and referee Jonas Eriksson deemed the action to have continued into the penalty area.

Griezmann sent Leicester keeper Kasper Schmeichel the wrong way from the spot after 28 minutes although the hosts could not add to their advantage in the remainder of the encounter and Fernando Torres missed a good chance to double the lead.

Kylian Mbappe scored twice to give AS Monaco a 3-2 win at Borussia Dortmund on Wednesday in a Champions League quarter-final first-leg match that was postponed following an attack on the home team's bus.

Mbappe gave Monaco a 19th-minute lead shortly after Fabinho had missed a penalty for the visitors, and they went further ahead when Dortmund defender Sven Bender headed into his own net.

Ousmane Dembele pulled one back for Dortmund in the 57th minute but another defensive mistake allowed Mbappe to break away and grab a third goal for the Ligue 1 side. Shinji Kagawa gave the German side hope with a neat finish six minutes from time.

Which services will be allowed in Kathmandu Valley from Tuesday?
9 hours ago

Brazil passes half a million COVID-19 deaths, experts warn of worse ahead
21 hours ago