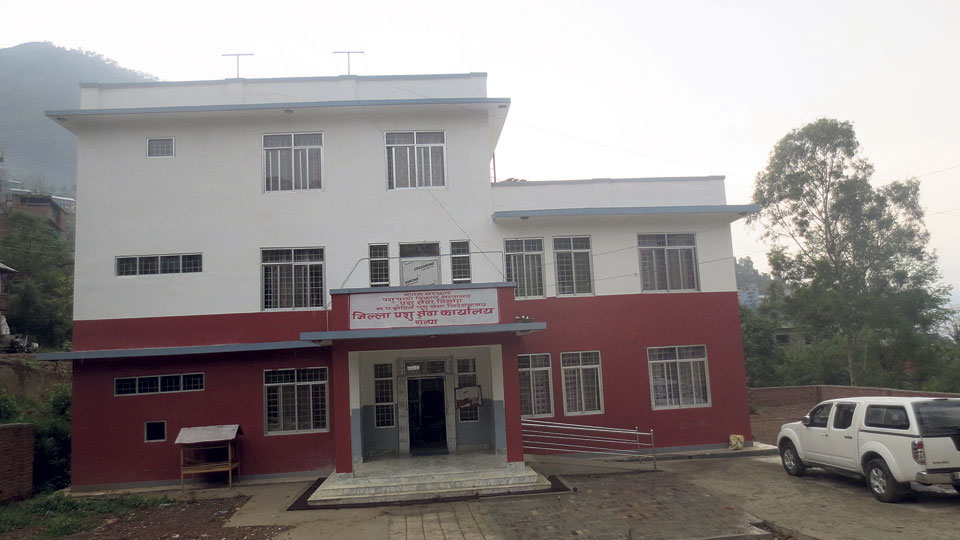 This undated photo shows the newly-built offices of the District Livestock Service Office-Rolpa. Work on the building was completed a few months ago, but the construction firm that built it is yet to receive payment from the government | Photo: Republica

ROLPA, July 2: Home minister Ram Bahadur Thapa has been speaking of penalizing contractors who do not complete work on time. However, there are some contractors who have not received payments for works completed on time.

As the government has halted payments citing lack of funds, many ongoing construction works have been affected. Work at many projects is set to come to a standstill if a way out to the situation is not found out the earliest.

Different government agencies owe farmers tens of millions of rupees for works which have already been completed. Construction entrepreneurs have already spent huge amount of money in these projects. However, they have not received any payment. This leaves them with no option but to halt works at undergoing projects.

“It has been long since we completed our work. However, we have not received payment for our work. The government levies a fine of 10 percent on farmers if construction works are not complete on time,” Bishwa Kumar Chand, a construction entrepreneur, said, adding: “The government should also compensative us for the delay in release of payments.”

A firm owned by construction entrepreneur Krishna Prasad Chaulagain completed construction of an office building for District Livestock Services Office, Rolpa, a year ago. “It has already been a year since I complete the work worth Rs 6.1 million. But I am yet to receive payment,” added Chaulagain. “The government, which has decided to penalize construction entrepreneurs if they do not complete work on time, should also take the policy of rewarding contractors who complete work on time.”

Officials of Urban Development and Building Construction Division Office, which is supposed to make payment to construction entrepreneurs, have no idea when they will be able to release payments. “We are yet to pay contractors about Rs 200 million. However, we do not have any fund at the moment as the government has not release payment,” said Ishwor Raj GC, chief of the division office. “We have been told that funds will be released soon. The division office will start making payments to contractors as soon as we receive funds.”

Officials of Contractors Association of Nepal, Rolpa, are annoyed with the government. “The government makes us to pay 10 percent fine when we are unable to complete the project within the stipulated timeframe. However, it is taking no initiative to pay us for works complete long ago,” Man Bahadur Khatri, president of the association, said. “Now, it should compensate us for the delay in making payment.”

Fiscal year is ending and we have no idea when the government will start releasing payments worth Rs 200 million, he added.

Suresh Neupane, chief of Road Division Office, Chakchake, is also worried has the office has no budget to release payment to contractors. “Higher authorities say the payment has been reimbursed. I am expecting the funds to arrive by the end of Ashadh i.e. mid-July,” he said.

The road office has to pay farmers Rs 300 million for road projects and another Rs 80 million for bridge projects.

“We know contractors are in a very difficult situation. But there is nothing we can do,” added Neupane.

GORKHA, May 28: Many multi-million rupee projects in Gorkha district have remained incomplete even months after crossing the deadline. In fact,... Read More...