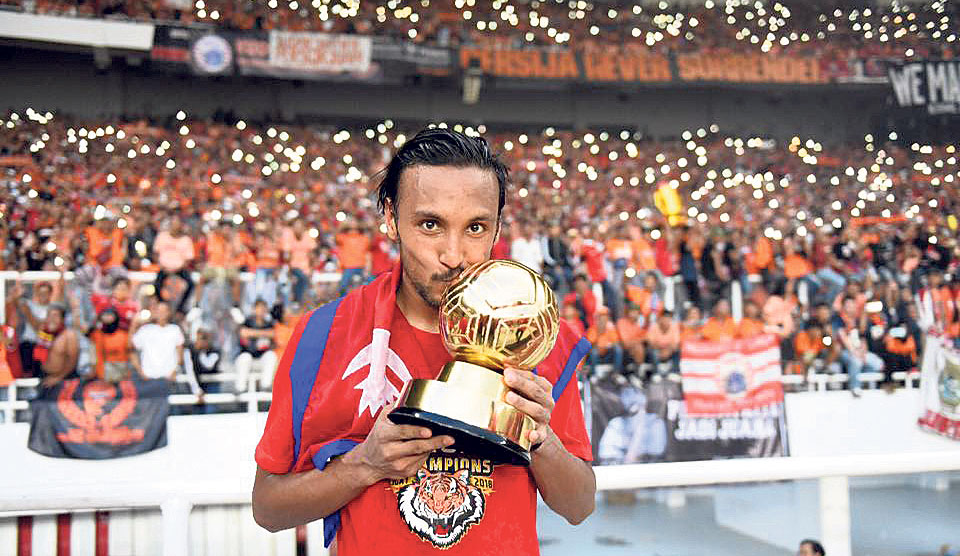 In the last league match, Persija defeated Mitra Kukar 2-1 to become the champion winning 18, drawing eight and losing eight of its 34 matches. It accumulated 62 points, one ahead of the second-placed PSM Makassar.

With the title win, Persija has been able to secure its place in the AFC Championship playoff and in the AFC League Cup.

The win has been the first title win for Persija, who ended the league in the fourth place last season.

Chand was instrumental for Persija in the title win as he played 31 out of the 34 matches for the team scoring three goals. Not just that, he also won the ‘most valuable player’ of the tournament. He finished ahead of Persebaya’s David Da Silva and PSM’s Wiljan Pluim.

A product of All Nepal Football Association (ANFA), Chand had started his senior professional career in 2009 playing with Machhindra Club in the Martyr’s Memorial A-Division League.

At the age of 19, he was awarded the best defender award with brilliant performances throughout the league campaign. He then went to play for I-League outfit Hindustan Aeronautics Limited Sporting Club from 2010 to 2012.

After the two seasons with the Indian club, his talent was known throughout South Asia.

He then went to PSPS Pekanbaru in 2012 where he played for a year and spent further two years from 2013 to 2015 in Persija. He scored six goals in 46 games during that period.

Chand was associated with Malaysia’s T-Team in 2016 for a year and joined Manang Marshyangdi Club in 2016. He returned to Persija in 2017.

JAKARTA, Dec 27: Indonesia on Thursday raised the alert level for the erupting Anak Krakatau volcano to the second-highest, and... Read More...

Indonesian police over the weekend arrested two more members of a militant group that had planned to bomb government buildings... Read More...

Local administrations in Kathmandu Valley decide to lift odd-even rule for buses, microbuses and tempos
12 hours ago
Govt warns of action against those posting photos, videos in social media platforms without consent
22 hours ago

Govt, ASDP and NACCFL sign deal for capacity building of cooperatives in Karnali
14 hours ago