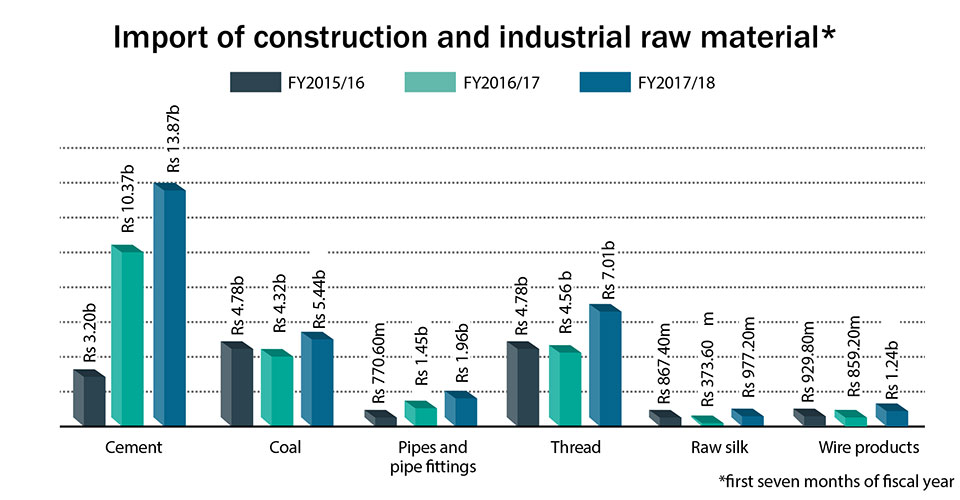 The import of the said materials in the review period soared to Rs 286.5 billion in FY2016/17 increasing by 86.4 percent from Rs 153.8 billion in the previous year. This year, according to the report, construction and industrial raw material worth Rs 322 billion was imported to the country, which is 12.4 percent more than that in the first seven months of FY2016/17 and a staggering 109.4 percent more than that in FY2015/16.

The import of Bitumen has increased by nearly 47 times in the first seven months of FY2017/18 as compared to that of FY2015/16. FY2016/17 saw an increase in the import of this product used in black-topping of roads by 17 times as the import jumped from Rs 22.9 million to Rs 389 million. This year, the import of Bitumen further saw a leap by 175.5 percent increasing to nearly Rs 1.07 billion.

The import of steel rods and sheets has seen a stunning increase by more than 24 times in the past two years. While it increased from Rs 26.2 million in the first seven months of FY2015/16 to Rs 564.4 million increasing by nearly 22 times, this increased by 11.8 percent as compared to last year reaching Rs 631 million in FY2017/18.

Similar to the trend seen in the import of coal, although the import of threads to the country fell by nearly five percent on FY2016/17 as it fell from Rs 4.78 billion to Rs 4.55 billion. There has been a rise by nearly 54 percent on the first seven months of the current fiscal year as its import crossed Rs 7 billion. Tread coming from India and across the globe fuels the garment industry of the country.

Raw silk that has been an important ingredient for pashmina products has also seen a rise in import by 161.6 percent in the past seven months of FY2017/18 as compared to the previous year. Although silk import plummeted by nearly 63 percent in FY2016/17 dropping from Rs 864.4 million to Rs 373.6 million, it has increased greatly to Rs 977.2 million this year.

Following a dip by 7.6 percent in the import of copper plates and wire products between FY2015/16 and FY2016/17, the import of wires has risen by 44.1 percent as it reached Rs 1.2 billion this year from Rs 859.2 million last year and Rs 929.8 million in the year before during the review period. Copper is used as a conductor of electricity when it comes to wire while sheets of copper is also used to make handicrafts.

Economists claim that such dramatic increase in the import of construction and industrial raw materials is due to the increased construction work and the growth in the manufacturing sector of the nation.

Likewise, reinforcing Acharya's speculation is the Macroeconomic and Financial Report published by NRB which reads, "An uptick in foreign direct investment has ramped up the construction of hydropower projects and production of cement. On top of these factors, the completion of elections and the formation of governments in all three sectors have created a congenial environment for private sector investment."

KATHMANDU, July 24: Forty-five percent of the total land in the country is covered with forest. Despite this, the country's... Read More...

KATHMANDU, March 22: At a time when the government is prodding the banking industry to increase lending to productive sector, loan... Read More...

Coronavirus vaccine production rolls off in Belgium
21 hours ago

Complaints filed against ambassadors-designate Khatiwada and Regmi
13 hours ago

Govt refutes curfew and state of emergency rumors
13 hours ago