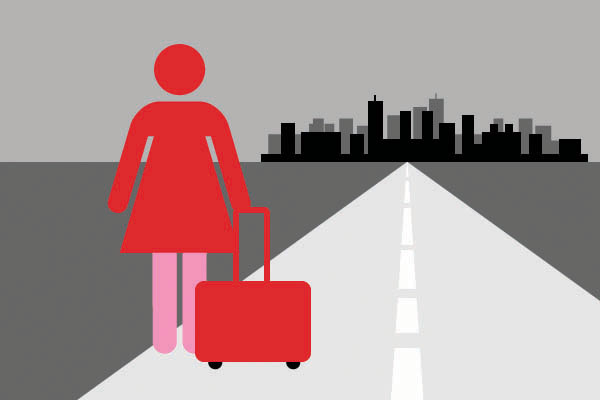 The trend of leaving villages, mostly by youths and new generation, is the major cause behind the arable rural lands becoming barren fields

Kathmandu is now overcrowded by migrants from across the country and the trend is in rapid rise. However, there was a time when people from the capital used to migrate to outside, many to remote areas of the country for various reasons.

An outbreak of cholera in Kathmandu valley about 150 years ago forced four families from the Newar community from Lalitpur to flee the valley for safety. They reached Chainpur of Sankhuwasabha, over 560 kilometres from Kathmandu, on foot and settled there. “Apart from cholera, difficulty to manage extravagant and engaging frequent traditional festivals and rituals is believed to be another cause of migration,” says Padam Kumar Shakya, 65, of Chainpur bazaar whose forefathers went there five generations ago. Altogether, there are around 200 Newar families in Chainpur, according to 71-years old retired teacher Narendra Shakya.

Padam Kumar Shakya’s relatives still live now in Patan, Lalitpur and families on both sides visit each other on occasions like marriages. “The culture and religious activities we follow are exactly like those in Patan although we don’t organize chariot dragging Jatra (fair) here in Chainpur,” he said. Sometimes, the Shakyas of Chainpur feel that their forefathers were wrong to come to such remote place. “We would have enjoyed higher standard of life had our forefathers not migrated,” said Narendra Shakya, the retired teacher.

Dr Shanker Thapa, head of the Central Department of History, Tribhuvan University, traces the history of migration of Newar community outside Kathmandu valley to 800-900 years back. Authentic and credible studies are not available, but travel to many places in the course of business, extravagant guthi (community trust/endowment) and some wrong doers, who could not adjust themselves in their societies, are also believed to have migrated from Kathmandu valley. The Newar community, who mostly originated from Bhaktapur and Patan, migrated to places like Palpa, Kaski, Ramechhap, Doti and many other districts, Thapa said.

Migration trend
This trend has reversed to urban centres creating a lot of challenges in city areas. Impediment of the potentials of rural areas, which contain huge natural resources, with lacking human resources has become one devastating consequence of such migration. Population monograph of Nepal (CBS report 2014) explains in detail: “Every political change, be it the victory of King Prithvi Narayan Shaha, or the democratic movement of 1951 or the recent political events of 2005/06 has resulted in a huge tide of population movement in Nepal. Altogether, 2.6 million inter-district migrants were reported to be lifetime migrants in 2011, an increase from 1.5 million in 1981. Altogether 56 districts (16 from Mountain, 33 from Hill and 7 from Tarai) experienced net out-migration. Districts usually receive populations from adjoining or nearby districts. For example, Kavrepalanchowk, Sindhupalchowk, Dolakha, Ramechhap Dhading, Nuwakot, Makawanpur, Sindhuli, Sarlahi etc. were the source districts for Bhaktapur, Kathamandu, Lalitpur. Similarly, Kathmandu, Udayapur, Morang, Sunsari, Lalitpur, and Jhapa were the destinations for people from Khotang, Bhojpur and Terhathum.”

The decade long Maoist insurgency (1996 to 2006) pushed a large section of rural population to be migrated to urban areas for security reason. Likewise, opportunities in education, business, health and employment that are centralized in urban centres have encouraged rural people to migrate to cities. The trend of leaving villages, mostly by youths and new generation, is the major cause behind the arable rural lands becoming barren fields.

“One to two individuals from almost every household are in Gulf countries including Qatar, Malaysia, Kuwait, Bahrain, Iraq for earning,” said 21-years old Prayas Bal Tamang of Khamling, Sankhuwasabha, who runs an electronic shop at his village. Youths are not motivated to agriculture work as they prefer earning from foreign job.

Modanath Koirala, 67, of Dhupu, Bahrabise, who has seven children, said, “As all sons, daughter-in-laws and grandchildren are not at home and living outside home in the course of their work and education, I am living at home with my wife and 92-year old mother.” Although, agriculture was the main profession and even today it is the only basis for livelihood, the productivity of land has drastically eroded as it is difficult to find individuals even to carry dead bodies up to the stream for last rites, he said.

Change is possible
Enormous natural resources like herbs, fruits, mines and varieties of flora and fauna remain virgin as human resource has little or no motivation in finding their future in the villages.

Dr Govinda KC has been demanding decentralization of health facilities in rural areas. Medical mafias want to concentrate medical colleges in Kathmandu. Dr KC wants such colleges in rural areas. If we could set up hospitals, universities and educational institutions and create business and employment opportunities in rural areas it can help control internal migration. This will not only motivate people to live in rural settlements, but also help to translate the slogan of prosperity and double-digit economic growth into reality.

As the country has entered into federal model, we have the opportunities to elevate the charm of villages. However, the central level political leadership, which looks more bent on serving their vested interests, has not yet given any green signal toward that end.

Ill-intended government response to Dr KC’s demands is one representative example among many. This lack of empathy for the good cause shows speeches and slogans of prosperity being repeatedly chanted by political leaders are hollow and worthless.

Many rural areas wait to be explored and developed. The federal set up, the country has adopted is precisely meant to make a foray in such areas, create education, health, employment opportunities to retain local in their homes on one hand and encourage urban-centred migrants to return to their original homes on the other. Only then far-flung areas could reap the benefits of political changes in the country. Only then will reverse migration start to materialize.

ACHHAM, Mar 12: Migration from villages and towns of Achham for the last few decades has left many of the settlements... Read More...