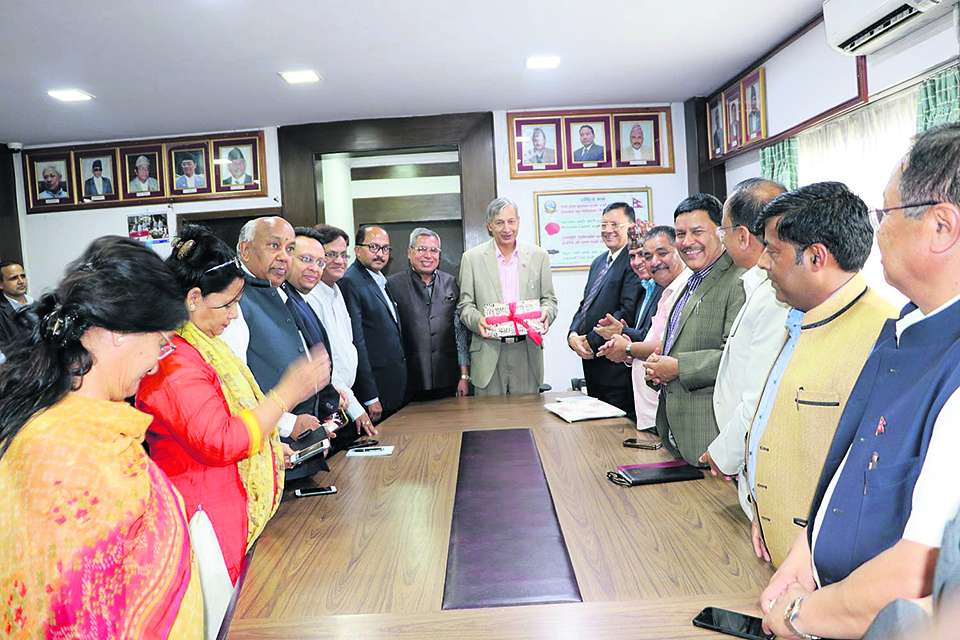 KATHMANDU, May 25: The Revenue Advisory Committee has presented its report to the Minister for Finance, Yuba Raj Khatiwada, providing recommendations to the government on revenue policy and programs, laws and regulations, reforms, tax rates, and other measures to be introduced in the budget for the upcoming Fiscal Year 2019/20.

Lal Shankar Ghimire, the coordinator of the committee, submitted the report to the minister on Friday as the government has intensified work on the budget. Khatiwada is scheduled to present the budget on Wednesday.

The committee is a permanent mechanism that is responsible for providing the government necessary advices to carry out reforms on revenue system for economic development of the country. The committee led by the Revenue Secretary at the Ministry of Finance (MoF) comprises economists and representatives from various private sector umbrella organizations. This also works as a permanent platform for both the private sector and the government to discuss and interact on various issues related to revenue system of the country.

The ministry, however, has not released the details or advices included in the report of the committee.

Issuing a statement, the MoF said that the report submitted to the finance minister was prepared after several consultations and meetings with the stakeholders. After receiving the report, Khatiwada expressed the government’s commitment to continuously carrying out reforms on revenue system and expanding the tax net.

Khatiwada also said that ‘rational’ recommendations made by the committee will be addressed through the budget for the upcoming Fiscal Year 2018/19.

According to Uttar Kumar Khatri, a joint secretary at the MoF, the committee has prepared the report with recommendations from 10 groups based on the nature and subject of revenue.
The subject matters included: reform on tax system (policy/legal/information technology/procedural reform), reform and amendment on laws and rules, administrative reform, expansion of tax net, review of rates and strengthening of federal finance management, investment and export promotion, infrastructure development and trade facilitation, non tax revenue mobilization and management, bank and financial institutions, insurance, cooperatives and capital market, exemption, incentives and subsidies, control of revenue leakages, among others.

The advisory committee held consultative meetings in each of the seven provinces of the country, while its sub-committees also collected feedback and suggestion from other stakeholders in Kathmandu.

“We voice our opinion for reform on revenue administration and expanding tax net rather than raising tax rates or increasing tax burden on the business community,” said the private sector leader, preferring not to be named.

Details of forest areas to be submitted in parliamentary committee

KATHMANDU, Aug 25: The meeting of the Agriculture, Cooperative and Natural Resources Committee under the House of Representatives (HoR) has... Read More...