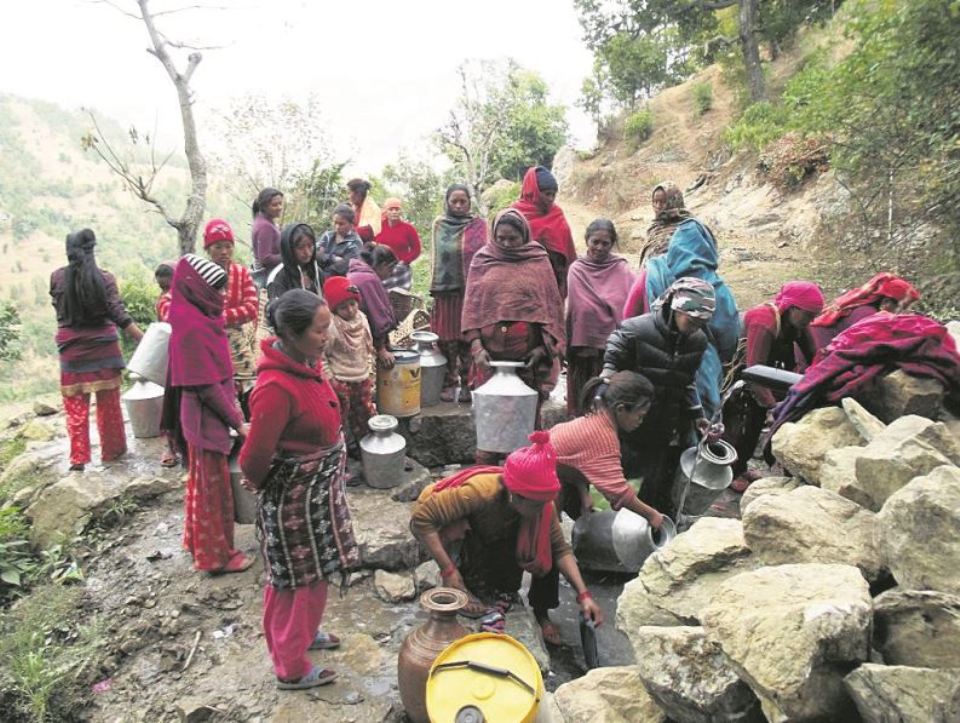 PYUTHAN, Jan 7: Numi Devi Nagarkoti, 60, a resident of Jhimruk Rural Municipality-6, Phythan, goes to a public tap to fetch water everyday before sunrise. After waking up at four in the morning, her first job is to go to the nearby tap to fetch water.

She has to stand in a long queue to wait for her turn. It takes almost three hours for Nagarkoti to return home from the public tap. As Nagarkoti spends three hours to manage drinking water, she always faces problems at preparing her children for school. Nagarkoti is always in a rush to prepare breakfast for her children.

“I have to always stay in a queue to fetch water,” Nagarkoti said, while she was waiting for her turn. Nagarkoti further added that the local residents have to stay in queue for hours during the dry season [mid-March to mid May].

“There are a total of 150 households in the village. And, there is only one public tap in the area, so the queue is obviously always long,” Nagarkoti said, adding that the tap is fully packed with fetchers even during evenings. She also said that there are no other water sources in the nearby areas.

Likewise, Sushila Nagarkoti, another local, said that disputes between fetchers are common at the tap.

“Everybody is in a hurry. So, dispute arises if someone jumps the queue,” she added.

Not only Numa Devi and Sushila, all the residents of the area are facing water crisis for years. The locals have been demanding that there should be a drinking water tap in every house of the region.

“The locals have demanded the leaders to revitalize the project, but there has not been any progress,” Nim Lal said, adding that a local has already died falling off a cliff while going to repair the water supply line.

“During the elections, leaders asked for votes ensuring the supply of drinking water in every house. But, after winning elections, they have ignored our problems,” added another local.

“The Mandredhunga-Makrabang-Torbang Drinking Water Project is in a poor state. So, the region needs a new project,” he said, adding that Rs 300,000 has been allocated to build a water tank at the public tap. “The water tank will give some respite before the new project starts,” he added.

CHITWAN, JULY 17: It has come to a revelation that the drinking water being supplied from the district-based projects was... Read More...