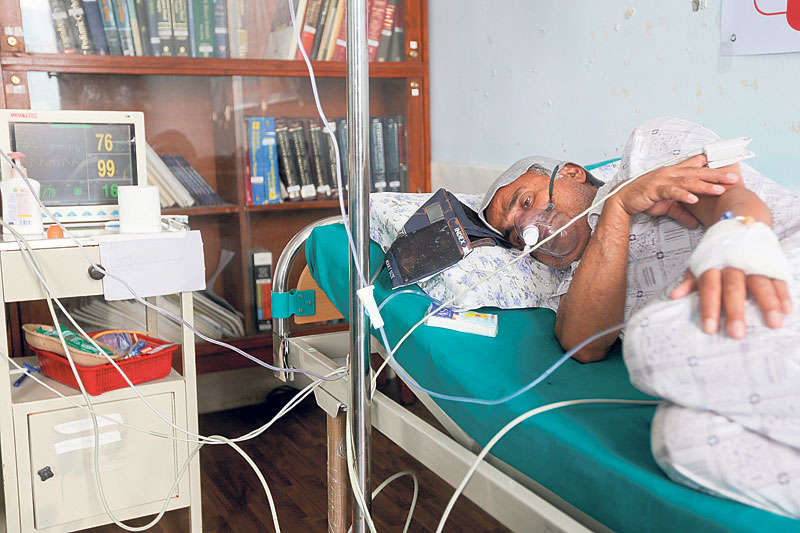 Dr Govinda KC on the eighth day of his fast-unto-death at TU Teaching Hospital in Kathmandu on Monday. He demands vital changes in the medical education sector. (Dinesh Gole/ Republica)

KATHMANDU, Oct 4: Resident doctors at Tribhuvan University Teaching Hospital (TUTH) are all set to boycott the out-patient department (OPD) from Tuesday, in support of the hunger strike staged by Dr Govinda KC, senior professor at the Institute of Medicine (IoM).

Around 2,000 patients from across the country visit TUTH every day for the quality care it provides at affordable rates. There are 250 to 300 resident doctors at TUTH, according to the National Resident Doctors Association (NRDA).

“We will boycott all the services at TUTH except emergency and surgeries from tomorrow,” said Dr Leison Maharjan, president of NRDA. “We will continue our support until Dr KC's demands are met,” he added.

Academic activities at IOM were boycotted by the resident doctors from Sunday. However, paramedics, faculty members and medical officers will not halt their services, according to the TUTH authorities.

Dr KC, who is demanding that the proposed medical education bill be approved by the ongoing session of Parliament, began his ninth fast-unto-death from September 26.

Dr KC started the strike claiming that the government has failed to address his demands as agreed. He forwarded a four-point memo on September 26 in the course of launching his fresh hunger strike. The four points include implementation of past agreements, passage of the medical education bill by Parliament in the ongoing session, initiation of the impeachment of Lok Man Singh Karki, chief of the Commission for Investigation of Abuse of Authority and CIAA Commissioner Raj Narayan Pathak, and implementation of the fee structure proposed by the Mathema Commission.

Dr KC had called off his 16-day hunger strike about eight weeks ago following a four-point agreement signed between him and the government.

Meanwhile, Dr KC's condition is deteriorating fast. “His oxygen level is fluctuating and sometimes drops to 48 percent despite the oxygen administered continuously via facemask,” said Dr Maharjan. “The heartbeat rate is only around 40,” he added. “Blood pressure is also on the lower side, he is too weak and can hardly speak.”

However, the government has not done anything so fa to address his demands. Health Minister Gagan Thapa visited Dr KC on Friday to enquire about his condition.

The government has tabled a bill in Parliament aiming to address KC's demands. But he has demanded passage of the bill by the current session of the House.

Solidarity for Dr KC Alliance has warned that it would launch nationwide protests if the government prorogues the current parliament session without addressing the demands of Dr Govinda KC, who has been staging fast-unto-death protest since the last eight days.

The alliance has announced that it would start sit-in in front of the prime minister's official residence in Baluwatar for an hour every day starting Tuesday until Dr KC's demands are addressed.

"The alliance is saddened by the way the parliament and political parties have turned a deaf ear toward his demand to impeach the chief of the Commission for the Investigation of Abuse of Authority (CIAA)  Lokman Singh Karki," stated a press release issued by the alliance.